Jayhawks come through in crunch time to win at Baylor

Kansas guard Frank Mason III (0) gets to the bucket past Baylor guard Lester Medford (11) during the second half, Tuesday, Feb. 23, 2016 at Ferrell Center in Waco, Texas.

Down by as many as eight points on the road in the second half and getting out-manned on the boards much of the night, Kansas found enough inner toughness in crunch time Tuesday night to recover for a 66-60 win at Baylor’s Ferrell Center.

KU junior guard Frank Mason III scored eight of his team-high 19 points in the second half to help the Jayhawks (24-4 overall, 12-3 Big 12) maintain a two-game lead in the league standings over West Virginia and Oklahoma and drop Baylor (20-8, 9-6) to three games back.

The Jayhawks held the Bears to 28.6-percent shooting in the second half and finally started securing some defensive rebounds late, despite Baylor getting to 20 offensive boards on the night.

Kansas made 8 of 19 from 3-point range, led by Devonté Graham’s 3-for-7 night, and the visitors shot 50 percent from the floor overall, helping to offset the Bears’ 14 second-chance points. 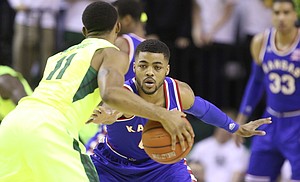 • The game turned when: Landen Lucas snagged an offensive rebound on a Wayne Selden Jr. missed 3-pointer with 3:07 left. Before that, the Bears and Jayhawks kept trading jabs in a game that featured 8 ties and 17 lead changes. Lucas came up with 5 offensive rebounds (10 total) in the victory and his put-back on that Selden miss gave KU the lead for good.

• Offensive highlight: The way this one went KU had to get a bucket out of a timeout with just more than a minute and a half to play, and the Bears within a point. So what did Bill Self draw up? A lob for Selden, who threw down a perfect pass from Graham, giving Kansas a 60-57 advantage with 1:27 left. 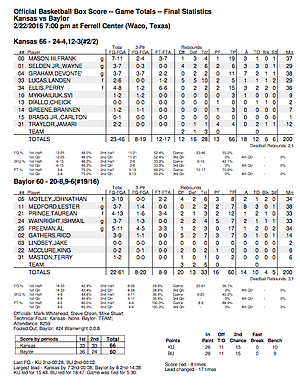 • Defensive highlight: It certainly wasn’t flashy, but Lucas came up with a timely steal in the paint with the game tied at 55. His good hands showed up again on the ensuing offensive possession, with his aforementioned put-back.

• Key stat: Field-goal percentage. This was the only area where KU held a clear advantage. The Jayhawks’ ability to shoot 50 percent to Baylor’s 36 percent gave them a chance to stay in the game, when BU won the rebound battle 33-28.

• Up next: KU returns to Allen Fieldhouse for an 11 a.m. Saturday tip versus surging Texas Tech. A win in that one would assure the Jayhawks of at least a share of their 12th consecutive Big 12 regular-season title. 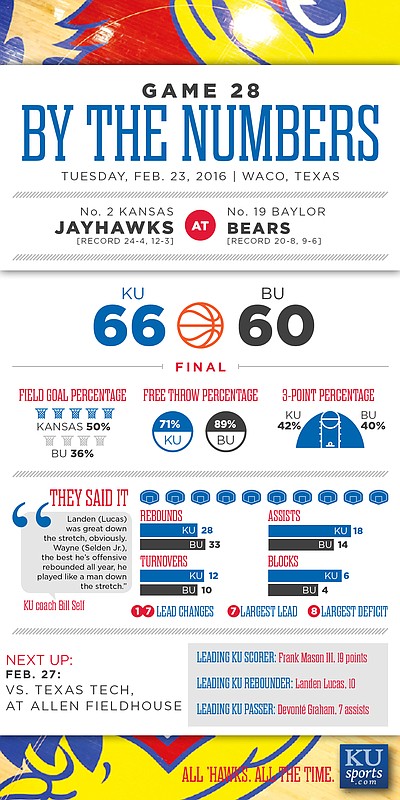 And by the way, the throwback blues KU wore tonight are several levels above the nuclear yellow BU wore.

I'm not one to count my chickens before they hatch BUT get ready for ring #12! Coach Self, sorry I doubted you!

If I'm not mistaken, this game makes 8 in a row. Four of those have been on the road and four of them have been against ranked opponents.

Kansas is as legitimate a title contender you will find in college basketball this year.

The only frustrating thing for me is when Lucas gets the ball in the paint the defender immediately sags off of him and plays the passing lane, which tells me they have 0 respect for Lucas as a scorer

For all the good that Landon has done, it is incredibly evident that he is more likely to get a TO than points if he tries anything more than a pass from greater than 3 feet away from the hoop. Fortunately, he generally knows it, which is the really important thing. If other teams do - okay, we have enough offensive players around him that we can survive just fine.

Is it sacrilegious to call him the low-post version of Doug Gottlieb?

Lucas isn't likely to steal credit cards from other students, so yes, it's sacrilege.

Lucas seems only comfortable taking shots when he's already at the rim. There were several times he got the ball just a dribble or two away from the rim and looked to pass when he was wide open. Obviously he's not comfortable with that shot. If Ellis had the ball in that spot he'd have a double team, and still likely score. Landon would be a much more valuable player if he could shoot from 6 feet. This is where Bragg has a distinct advantage.

What people who understand basketball realize is that offense is created in many ways. Lucas sets excellent screens and his offensive rebounds create extra possessions. Would it be nice if he was a better finisher? Yes. He's improving. There's only one ball anyway...

Foe what it's worth, his offense is far better than Brannen Greene's defense and his defense is better than Greene's offense. Yes, they play different positions. The point. Both ends of the floor count.

Most of Landen's contributions may not always show up in the box score, but he has had a double-double, so he is capable of achieving at both ends. However, as long as he gets rebounds, sets good screens, makes good passes, and plays solid defense, he will be invaluable to the team, even if it is not noticed by some. The coaches see it, and that is all that matters.