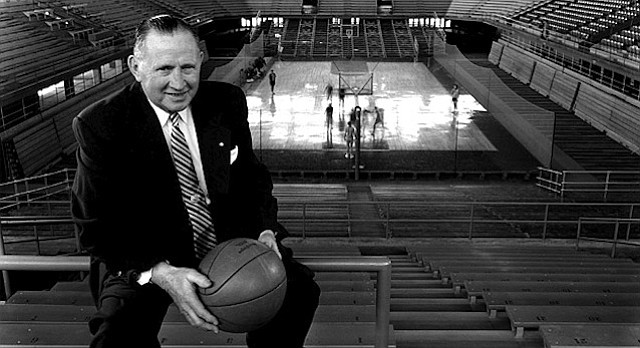 The legendary KU coach Phog Allen in the 1950s.

KU Libraries has launched a crowdsourcing campaign entitled, “Cordially yours, Forrest Allen: Preserving the legacy of the Phog.”

The campaign, according to a university news release, is “an effort to remedy deterioration through the preservation and digitization of more than 66,000 Phog Allen documents.”

Documents currently housed at the University Archives at KU Libraries (in the Kenneth Spencer Research Library) include “blueprints of an experimental backboard, scripts of Allen’s radio program, and his correspondence featuring a set of letters between Allen and a very young Bob Dole.”

To help digitize and preserve such documents, KU fans can make donations online.

“Housing paper records in the University Archives does not, unfortunately, ensure that the paper they are printed on will be available forever. Paper deteriorates,”  Becky Schulte, university archivist for KU Libraries, said in the release. “Creating a digital archive is state-of-the-art in today’s environment, guaranteeing the best means to make materials available for future generations."

To thank donors for their participation, incentives are provided at varying donation levels and include a chance to win KU basketball tickets, an invitation to a private event and more.

The link to the donation page is broke... It has an extra http://, a space, and you forgot the : after the https

The technology now available makes the cost for projects like this very cost effective. The George C Marshall Foundation (marshall foundation.org) has been digitizing all his papers rot about a dozen years. The Washington Papers have commenced a similar project.

If you have interest in the 20th century history, it is very easy to query the database.

That's why i'm wondering why they need donations, you'd think this venture would be a cheap in house project the university would pay for. Like half of 1 kids tuition for a semester.

A few months ago, I had contacted a LJW staff writer about some correspondence between Phog Allen and Harry S Truman, who were boyhood friends growing up in Independence, MO. In fact, the two lived a block and a half from each other. Harry was never an athlete, but Phog coached Harry's wife Bess in basketball before the two were married. Their friendship remained close through the years, and the two even wrote with regard to Phog Allen's son who was stationed in Korea during the Cold War (if you know anything about the Truman Doctrine, you'll understand that Phog had an avenue straight to the source with regard to the welfare of his son). Truman also congratulated Phog on his accomplishments at the University of Kansas, and could be considered a fan by virtue of his close friendship with Allen. Many of these documents are on record at the Presidential Library in Independence, MO. I had hoped to hear of progress on this story by this point, but I am waiting patiently as I was told that occasionally a feature story is done of that nature. What a great time it would be to bring this to light, with the recent displaying of the tradition of Kansas basketball with Naismith. This kind of information seems right in that vein, only through the life of Phog Allen.

Harry Truman was an amazing person. It seems everyone in KC during his era had some kind of uniquely personal relationship with him. So many were with him in France and later Marshal's for him when he severed as Jackson County Judge, through his presidency. I'll never forget the scolding we received for missing the Truman wake at the Truman library so we could attend the KU Christmas Big 12 basketball game.

On one of my many trips to the Truman Library, I was elated to learn of his relationship to Allen (http://jchs.org/blog/2014/3/7/did-you-know-phog-allen-grew-up-in-independence).