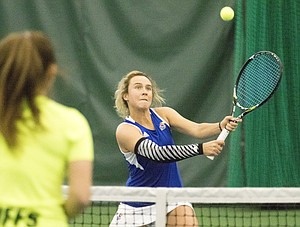 Kansas freshman Janet Koch hits a return volley during her number one doubles match against Colorado Sunday afternoon at the Jayhawk Tennis Center.

“It was very competitive. There was a huge swing from the doubles to the singles,” Kansas coach Todd Chapman said. “The doubles teams from Colorado did a great job responding and came out and really competed and made some things difficult on us. Every time we’ve been pushed as a team this season, they’ve found a way to win.”

KU’s Nina Khmelnitckaia and Janet Koch claimed a 6-2 victory at No. 1 doubles, and teammates Smith Hinton and Anastasiya Rychagova rolled to a 6-0 victory at No. 3 to clinch the doubles point. 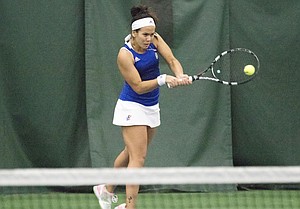