Freshman forward Mitch Lightfoot in position to be a factor

Kansas forward Mitch Lightfoot celebrates a bucket by teammate Frank Mason III during the second half of the Champions Classic on Tuesday, Nov. 15, 2016 at Madison Square Garden in New York.

Everybody knows that the Kansas men’s basketball team has the guards necessary to win the Big 12 Conference for a record-tying 13th consecutive season.

But whether the third-ranked Jayhawks actually get it done could come down to the play of their big men.

KU perimeter players Frank Mason III, Devonte’ Graham and Josh Jackson all rank in the Top 15 in the Big 12 in scoring — Mason and Jackson in the Top 6 — and the KU offense ranks first in the conference in three-point percentage (.413), second in field goal percentage (.517) and third in scoring (86.6 points per game) and assists (18.1 per game).

Add to those numbers the fact that KU’s elite backcourt trio has been supported by strong play from part-time starters Sviatoslav Mykhailiuk and Lagerald Vick and it’s easy to see that KU coach Bill Self has plenty of depth, flexibility and flat-out talent to do whatever he chooses with his backcourt.

Up front, it’s a bit of a different story.

With the recent injury to six-game starter Udoka Azubuike undercutting KU’s front court depth, the Jayhawks (11-1) find themselves in the position of needing freshman forward Mitch Lightfoot to step up in his absence.

Although Lightfoot weighs in 70 pounds lighter and four inches shorter than Azubuike, a good chunk of KU’s big-man minutes the rest of the way could fall on his slightly narrower shoulders.

“Definitely,” said Graham when asked if it was important for the Jayhawks to get Lightfoot going in the wake of Azubuike’s injury. “With all the bigs, we told them everybody’s gotta step up their game even more now that Udoka’s out. We’ve just always been trying to push that confidence in ’em, even when Udoka was here.”

As an athlete, Lightfoot never has been one to lack confidence. He carries himself like a player who believes he belongs, plays, for the most part, within himself and to his strengths, and already has experienced some pretty important minutes during the first 12 games of his college career.

He has played in 11 of the Jayhawks’ first 12 games — scored in six of them — and found himself on the floor during some key moments in early-season games against Indiana and Duke.

“I hate to say this, because it sounds like you’re taking away a guy’s game, but just don’t screw up,” began Self when asked about the primary focus for Lightfoot 12 games into the season. “Defend and run and jump and rebound and play hard and make easy plays. Those are the things I think he can do and then when he does those things he’ll get more freedom to expand his game a little bit offensively.”

Even though his minutes have been limited, Graham said he thought Lightfoot had done “a good job,” thus far and praised him for his defensive presence and intensity.

“He goes after every ball,” Graham said. “He’s starting to talk a lot better and, switching four, he can do that, switch onto a guard (in) late-game situations.”

Lightfoot certainly is not the only KU big man being asked to bring a presence to this year’s team. But the Jayhawks already have a pretty good idea of what they’ll get from Landen Lucas and they’re not exactly sure what they can count on getting from Carlton Bragg Jr. Those facts make the development of Lightfoot not only important but also an interesting mystery.

“He needs reps, he needs game time, he needs to be able to play through mistakes, which we haven’t given him a lot of opportunities to do that,” Self said. “(We just need him to) play to his athletic ability.”

Lightfoot and the Jayhawks will open Big 12 play at 8 p.m. Friday against TCU in Fort Worth, Texas.

Lightfoot is likely to have an interesting journey at Kansas. Over the next 97 odd days he'll be asked to be a legit college 4, big, post or Power Forward. He'll surprise many I hope.

Suddenly his world could pivot sharply. The frontcourt for next fall looks like this: Azubuike, Maxwell, Coleby, Preston, very possibly Bragg and Lightfoot. A lot of players with size and talent for 80 minutes...

The Backcourt is more difficult to project. Newman, Vick, Garrett and hopefully Svi and Graham. Almost certainly not Jackson. Unless Kevin Knox or Brian Bowen switch course, or a grad transfer arrives, a hole at the 3 is very possible. Can Lightfoot play the 3? He's got more of the skill package than Ellis did. It would certainly give Lightfoot more appeal as a pro. His next 8-9 months could be crazy.

Pretty enlightening, Jay. Hadn't thought about Mitch at the "3", but perhaps so.

I really like Mitch for the attitude and character that he appears to have. I think that he can be a rather quick learner, and I hope he has a marvelous career at KU and beyond.

For this year, ML's job, as coach indicated, is to not screw up. Steal minutes for the other bigs, get a rebound, minimize needless fouls, set picks, role to the basket, make your guy have to work for his points, run the floor. Do that with consistency and this year, you'll get minutes. I think Carlton has to return to this mindset also. It was one Carlton had last year and it really helped that team. This year, it is stardom, draft status, off court (sorry about pun) issues, which seem to have him trying to play outside of himSelf (whoops, another one). And with that, you have a nice room in Coach's doghouse. Back to the basics, Carlton, and ironically, you may find the elusive stardom you dream of achieving. LL, ML, CB, Jr. playing within themselves doing the basic stuff allows for the talented group of guards and The Thing (JJ) to take care of our business.

I think any 5-star HS player dreams of stardom. They'd be kind of oblivious if they didn't.

But, just curious . . . how do you know that Carlton's focus on stardom and draft status has become a priority over team victories this year? Maybe I'm oblivious, but I don't really see that.

You are absolutely right, RJ. I don't know. Too strong of a word/phrase. How about it "would appear to me," or "in my opinion," or something like that? With that clarification, I am sticking with "what I think I see."

does anyone know how Carltons numbers this year compare to last? I know a lot of variables have changed, but I'm curious if his stats per minute are worse.

Not much different if you look at the fact he is playing twice as much. His per 40 is almost identical.

Thanks Marius. I still believe in him. If anything, it may mean we get to keep him at KU 3-4 years as opposed to him having a breakout NBA type year. Either way, we win!

I haven't seen much difference in Bragg from last year to this year. I thought last year that playing behind Ellis would give him the opportunity to get some quality minutes behind a four-year starter. The growth one usually sees between a players first and 2nd year hasn't shown itself as of now.

Mindset is just about impossible to read. It's just too vague a concept to measure. Not saying you are wrong or right. Bragg may very well be looking at next year's NBA draft but as of now, he isn't in the first or 2nd round.

Overall, I agree that getting back to the basics is what will help Bragg the most. Everything else will fall in place.

Side note, if Villanova loses at Creighton this week and KU beats TCU, then Kansas will be #1 in next week's rankings

TCU may be legit this year. Good coach who looks like he stresses D. Their only loss was an away against SMU by 14 where they were outscored by 16 at the line, wow! Won last two games against mediocre teams, Bradley and Tx Southern by 37 and 31. You can bet it will be rockin in the Metroplex.

Definitely, it won't be an easy win, Dixon is a really good coach and he would love a statement win vs KU

That moment when you knew Mitch was going to be a special player... 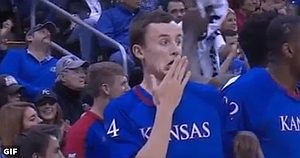 Great, Ryan! Was this a reaction to a JJ dunk? It's priceless, and it got some announcer coverage during the game I think.

Turned away from the UCLA-Oregon game last night when UCLA got a pretty good lead with a few minutes to go. Therefore, I missed the winning 3 pointer just before the buzzer by Brooks of Oregon. That should teach me to remember "it ain't over until it's over."

You're right, Kent. We better not look past TCU.

When I click on the Dixon Lunch Break article it tells me it's unavailable. Bad url, kusports?

ML is an exciting teammate from the bench I am wishing him well and we do need him to contribute, but...... to me he appears to have a long way to go. Not making mistakes will help.

It's interesting that nobody is talking about Colby. I realize that he's barely played, but I thought he looked good the one time I saw him play. Is he just hopelessly out of the mix?

Last game he went in late in the first half, 2 fouls in less than a minute and was never seen again.

We really need Dwight to step up a little. He has experience that could be very useful as a sub for Landen and Carlton. If he doesn't, those minutes will definitely go to Mitch, which in the long run would be a good thing.

The key is for Landen and Carlton is to stay out of foul trouble as much as possible without losing some aggressiveness. Carlton hasn't shown a lot of aggressiveness thus far, but he still tends to get into foul trouble. Therefore, the pressure will always be on Landen, but given his experience and intelligence, I'm confident that he will come through.

As adjustments may have to be made, Coach Self has always shown that he a master tactician. Last year, the turning point was when he went to the team to get their perspective on who should be in the "5" spot. They chose Landen and were rewarded handsomely.