When his girlfriend accused him of cheating on her and began to get physically violent, University of Kansas basketball player Carlton Bragg Jr. stood against a wall with his head down and his hands in his pockets, according to a newly released arrest affidavit in the case.

Initially Bragg was arrested and charged with battering the 19-year-old woman, Saleeha Soofi. However, the charge against him stemming from the Dec. 9 incident was soon dropped.

A single charge of battery was then filed against Soofi on Dec. 14. 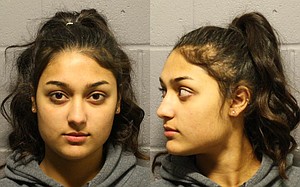 During a Delta Upsilon fraternity party on Dec. 9, Soofi pulled Bragg, 21, into a stairwell and the two argued, according to the arrest affidavit filed in Douglas County District Court. The two were dating, the affidavit says, and "previously agreed they would not date other people," but "Soofi learned Bragg was being unfaithful to her."

An arrest affidavit is a document filed by police explaining the grounds for an arrest. Allegations in an affidavit must be proved in court.

In the stairwell, Soofi told police, "she was swearing and pointing her finger at Bragg and his back was against a wall," the affidavit says; during this time she "felt Bragg was not paying attention to her, so she pushed him in the chest."

Citing the criminal investigation, representatives from both the Lawrence Police Department and the Douglas County District Attorney's Office denied the Journal-World's request for the video footage.

In the video, police noted two "individuals believed to be Bragg and Soofi" enter the stairwell, while Soofi slammed the door shut and engaged in "what appeared to be an animated encounter with Bragg," the affidavit says.

"During much of the encounter, Bragg stands against the wall with his head down and his hands in his jacket pockets," the affidavit says.

During the argument, Soofi shoved Bragg in the chest several times and twice she placed her left hand on his neck and pushed him against the wall, the affidavit says.

After some time "being punched or shoved by Soofi," Bragg removed his hands from his pockets and shoved her, the affidavit says, and she fell backward onto the steps inside the stairwell.

Soofi then walked up the stairs only to return shortly thereafter talking on the telephone, the affidavit says. The footage did not record sound.

As Soofi left the stairwell she slapped Bragg's shoulder, the affidavit says.

Initially Soofi told police that Bragg punched her in the face, but later she noted he might have only pushed her, the affidavit says. Officers noticed a "raised bruise" on her right elbow.

Bragg was arrested that morning and released later that afternoon after posting a $500 bond. He was temporarily suspended from the basketball team, but after the criminal charge against him was dropped the suspension was lifted.

Soofi is scheduled to appear in court on Jan. 25, when she will be formally charged.

Soofi and Hillary can be cellmates!

Maybe captain bone spur will provide clemency. Or maybe he can just grab her by the ...... because he's about as tough as you are.

This used to be a sports site, until you and Suzi - or whatever his name is - decided that it needed to be your personal political playground because you have no self-control, no discipline, no courage and no common sense.

Just another tough-talkin' p-grabber who has never done a tough thing in his life, unless you count getting out of your lazy-boy to grab a wine cooler.

There's no chance of bringing your emotional incontinence under control, is there?

BMcCabe has become the new jaybate

Hardly. jaybate was a force on the comment section. You might not agree with him but he had a strong command of the facts and his writing skills were unsurpassed by all except maybe HEM.

Yeah, Brett because you didn't insert your personal politics on the cheerleader KKK thing, did you? Don't be a hypocrite. Everyone can read your posts, and you did exactly what you claim to be pissed off at right now.

Brett would be taking huge personal steps forward beyond total cluelessness and massive emotional incontinence to be merely hypocritical.

That's hysterical, Jay -- almost as hysterical as the idea that Orange Jesus won't be the most incompetent, ignorant and amoral person to ever occupy the White House (and that's saying something).

Thanks Lenny. It's reality challenged snowflakes with that kind of anger that ensured his election and are helping ensure his reelection...

Jay, your comment is totally hyperbolic and way out line! Soofi committed a low level offense worthy of some kind of community service. Hillary committed major felonies that should result in an extended stay in Leavenworth with likely hardened fellow criminals like the IRS people, i.e.. Lois Lerner and John Koskinen....or the Deputy Director of the FBI’s and his wife, Andrew & Jill McCabe, who recieved almost $700,000 in campaign funds before the senior FBI official, who was supervising Clinton’s investigation, lobbied against charging her criminally.

An entire wing at GITMO is more suited for Hillary and that lot.

Hillary should die in federal prison.

You are seriously effed up Jay. Talk about emotional incontinence.

The media will still say she is the "victim"

No matter what the final outcome is. She's put a dent into his image.

If there weren't video, i'd totally agree with that...but video is powerful stuff.

Three mentions of video in the article...

2) "Citing the criminal investigation, representatives from both the Lawrence Police Department and the Douglas County District Attorney's Office denied the Journal-World's request for the VIDEO footage."

3) "In the VIDEO, police noted two "individuals believed to be Bragg and Soofi" enter the stairwell, while Soofi slammed the door shut and engaged in "what appeared to be an animated encounter with Bragg," the affidavit says."

No wonder you're so relentlessly clueless. You can't read! That might be your most moronic comment of the whole year! Not the most immature, deranged or pathetic, just the most moronic.

Security video from the stairwell Brett.

that video {see above}

Wow. What a turn of events. No dent to Carlton's image in my book. I guess the old song is right, "Breaking up is hard to do" especially for someone who probably thought she had her "meal ticket" for life.

I don't really care who you backed in the election. Keep your politics out of my enjoying the best college basketball program ever!!

Am I confused? I thought this was a University of Kansas Sports Site-not a Political Site! I'm sure there are plenty of places you can go, to talk Politics!