An old one-liner among those in the coaching profession goes: The best thing about freshmen is they become sophomores.

While the idea of first-year players making significant jumps in their impact and productivity is a popular one with the Kansas football program, too, head coach David Beaty and his staff enjoyed watching some freshmen perform ahead of schedule in 2016.

First-year safety Mike Lee played so well in the final weeks of the season, college football publications around the nation continue to award him for his body of work, which included a critical overtime interception in the Jayhawks’ lone conference victory, against Texas.

Athlon Sports named Lee, a true freshman from New Orleans, and Hakeem Adeniji, another true freshman, from Garland, Texas, to its Big 12 All-Freshman Team. Lee, a 5-foot-11, 176-pound defensive back who finished second on KU with 77 total tackles (trailing only senior safety Fish Smithton’s 93), and Adeniji, who started all 12 games on the offensive line, made Athlon’s first team.

Redshirt freshman Mesa Ribordy, from Louisburg, who started all 11 games in which he played on the O-line, made Athlon’s All-Big 12 Freshman second team.

Lee, who didn’t become a starter until the fifth game of his freshman year, also received a second-team spot on Athlon’s nationwide College Football All-Freshman Team.

Meanwhile, ESPN.com ranked the top true freshmen in the Big 12, and Lee came in at No. 4, behind Oklahoma State running back Justice Hill, Texas quarterback Shane Buechele and Longhorns linebacker Malcolm Roach.

Athlon’s recognition for KU’s most impressive players carried over to the sophomore class, too. The publication named consensus All-Big 12 defensive end Dorance Armstrong Jr. the league’s Breakout Player of the Year. 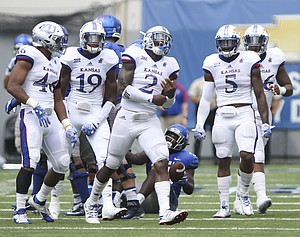 Likewise, ESPN ranked Armstrong among the Big 12’s top 25 players, placing the 6-foot-4, 246-pound lineman from Houston the 20th-best performer in the conference in 2016.

“An All-Big 12 selection, Armstrong finished with 20 tackles for the loss, the fourth-most in a season in Kansas history and the most by a Jayhawk since 2005,” Trotter wrote. “Armstrong was second in the Big 12 with 10 sacks, as well.”

One member of KU’s 2017 recruiting class recently picked up some significant recognition, too. Running back Dominic Williams, a commit expected to sign with Kansas, was named to the Texas Class 5A All-State first team by the Associated Press Sports Editors. In his senior season at Independence High, in Frisco, Texas, the 5-foot-9 Williams tallied 184 carries for 1,922 yards and 28 touchdowns. 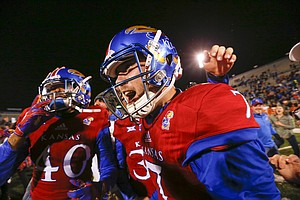 “The past few years since TCU joined the Big 12, the Horned Frogs have gotten into some unexpected struggles whenever they have played lowly Kansas,” Bryan Fischer wrote. “That was the case once again in 2016 as the Jayhawks led 23-14 at home in the fourth quarter and appeared to be on the doorstep of their first conference win in ages. TCU came storming back though with two late scoring drives, including one where QB Kenny Hill picked up his own fumble and ran 34 yards to set up a touchdown pass two plays later. KU unfortunately missed two field goal attempts in the final frame that could have won the game, but instead it was TCU’s Brandon Hatfield doing honors on a 34-yarder with less than 90 seconds remaining.”

KU’s 24-21 overtime victory in its home finale, on Nov. 19, turned out far more memorable for Beaty, who picked up his first Big 12 victory as a head coach against Texas. The highlight of the Jayhawks’ season made it the No. 1 Big 12 game, according to Athlon.

“[OK], maybe not the most well-played game in the Big 12 this season but it was one of the most interesting upsets in a variety of ways,” Fischer wrote. “Matthew Wyman kicked a late field goal to tie it and another to win it in overtime to snap a 19-game losing streak in conference play by the Jayhawks and all but assuredly end the Charlie Strong era at Texas at the same time. It was KU’s first victory over UT since 1938 (!) and came as the result of a ton of missed chances down the stretch for both teams, including a late fumble, fourth-down try and interception in overtime by the Longhorns. And to think it made D’Onta Foreman’s 250 yards on 51 (!) carries just an entry in the box score.”

It was clear that once Lee started playing that he has the best chance of any Jayhawk to one day play on Sunday's. The most impressive aspect of his game is not the number of tackles, but the way he tackles. He made many important one-on-one open field tackles against much bigger running backs and recievers and the kid pound for pound hits as hard as any player I can remember. Football is obviously a physical game and his all out hits can make a reciever think twice when extending for a ball. He clearly will need to get bigger without losing a step and learn to read defenses better, but Lee has natural instincts for the game. The way KU can be competitive and hopefully relevant again in football is to fill the roster with talented players (who are also good citizens), like Lee and Armstrong. Here is hoping that an enthusiastic Beaty and his staff can convince these types of players that they can impact a program such as KU without sitting out for years waiting their turn at the Alabamas and the Oklahomas of the world. Beaty will only be successful if he and his staff can recruit, recruit, recruit.

All of the receivers in Mike Lee's high-school conference should get together and send a thank you note to David Beaty. The guy absolutely brings the pain.

How on earth did Buechele get rated ahead of Mike Lee? Did anyone else watch the Texas QB play this year (and not just the game against us) and say: that's UT's QB of the future? Hmmmmmmm.

There are flicker's of light in the effort to rebuild the Kansas football program. Because of the sheer numbers required, there is a very long way to go. But there things in place to build off of for the future. I admire the man who chooses to do it. I wouldn't want it on my shoulders.

If they get another blueshirt class like the last one, we are only a year or 2 away from being rebuilt. Granted, it would likely still be a young roster -see 2016 OL with 2 freshmen, but there is a very realistic chance of being very competitive in 2 - 3 years. Maybe that is a "long" way, but it would mean we're about half way there now; 2 years into the rebuild.

The scary thing about Lee is that he should have been a senior in high school so basically he was playing as a senior in high school against guys who were playing in the Big 12 for 2 3 4 or 5 years. These other players had that much time to develop in game experience, weight room development Training Table food and diet coaching staff tutoring, Mike Lee came in with three years of high school experience and he still held his own and hit like a hammer. Just think if he played all 12 games and didn't start after the fifth game.

Wait till he gets bigger, learns technique, learns to play 12 coverages, defensive schemes, this kid's going to be scary by the time he is a 4th or 5th Year senior, if he doesn't declare for the draft before that.

If KU can get the other DB out of Louisiana who I believe is a four or five-star recruit Kansas might actually have something going on. Smithson is not only a big loss in terms of role model and experience but he was a senior and leader on the team Mike Lee is a good start to filling his shoes.

Losing Fish (not to mention the other 4 Sr DB's) could be huge, huge, huge beyond the obviously positional loss. He was so good with Mike. Directing him. Teaching him throughout the games. It was really cool to watch that mentoring.

It will be great to have him (hopefully) for a full year, tho I can see his performance impacting our D success being more a function of Coach Bowen's ability to fill the personnel void around him. There are a couple JC commits that should help a lot to compliment Armstrong & Wise + on the DL. Getting Dineen back in the middle will help, but we'll need more there as well. There's lots of rebuilding this off season on D, but great to have the young cornerstones on D in particular.

By the way, the one thing we have going for us is some variety and style in our uniforms. Look at the picture of Mike Lee with the Texas players in the background. Those are some ugly uniforms they have been wearing for 75 years. Texas and other teams are so steeped in tradition they choose not to break out with the different looks. I don't know if that is what a high end recruit would make a decision one way or the other. But dang, I'm glad we have a little style and some hot looks. It can't hurt anything.

Lmao if a recruit bases his decision on uniform looks who needs him anyway you're going to tell me that Texas has ugly uniforms you must be blind but they still managed to get top 20 recruits or have top 10 or top 20 classes. Tradition sells. l dont see Oklahoma changing their uniforms anytime soon and they stomp us every time we play them We have no tradition football wise, hey kiddies look at our brand-new shiney locker room that didn't help us win one game and ugly new uniforms that come in different color combinations I couldn't care less what uniforms we wear ugly,traditional, whatever Kansas needs players that can play that's all they should be worried about what uniform looks good on what Saturday? Really?

There is hope. There is light. The road to respectability is long but the journey has begun. RCJH

Glad to see some love for the big uglies up front. That's the majority of the OL that were red/blueshirts (Gibson now a junior?), and really young. As much talk as there was about the OL being a weakness and needing to improve, it is great to realize how young they are, and the development that should be ahead as they spend more time with Coach Jackson. Hopefully our JC/'Bama transfer lives up to billing as well. I think we're just needing to replace one spot, so we should see a big jump there next year.

The middle of the conference is so even, we could jump a long way in the standings if we can get the next step in improvement to being competitive. At this point though, there is still a big gap from the bottom to the middle of the pack.