Jayhawks need Bragg to focus on presence inside

Asked how much the 6-foot-10, 240-pound forward’s role might change with 7-foot freshman and six-game starting center Udoka Azubuike out for the season because of a wrist injury, Self flat-out said it would not.

Despite the way he has played thus far, and regardless of where he seems to look and feel most comfortable on the floor, Bragg is a big man. And, provided he performs well enough for Self to trust him the rest of the season, he’s going to have to get comfortable playing the bulk of his minutes as the Jayhawks’ lone forward on the floor alongside a four-guard lineup that has been wildly successful and productive during the first 12 games of the season.

“He’s not gonna play the 4 much,” said Self of the position where Bragg began the season, starting next to senior Landen Lucas in the Jayhawks’ front court. “He can’t. We don’t have enough depth to do that. He might if there’s no foul trouble the second half, but I don’t think it’s gonna change much.

“Carlton needs to settle in on being a defender and a rebounder and getting some easy baskets. When the face-up jumper’s there, take it; but that’s not something we can play to, face-up jumpers, when you don’t have another big guy in the game.” 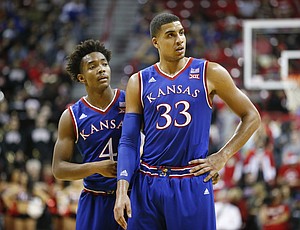 Kansas guard Devonte' Graham (4) and Kansas forward Landen Lucas (33) turn to the bench during the second half, Thursday, Dec. 22, 2016 at Thomas & Mack Center in Las Vegas.

Averaging 7.2 points and 5.6 rebounds in 16.1 minutes per game, Bragg continues to be a wildcard for this Kansas team, which ran through non-conference play with an 11-1 record and enters the Big 12 Conference portion of its schedule — 8 p.m. Friday at TCU — ranked third in the nation.

Moments of growth and progress too often have been interrupted by long stretches of silly fouls and sub-par decision making which have made Bragg more difficult to count on during the biggest moments of games. Beyond that, the player who many believed was in line to make the biggest jump of any Jayhawk — from solid reserve as a freshman to big-time starter capable of stepping into Perry Ellis' shoes this season — often has looked to be pressing and frustrated by his inability to find a rhythm and deliver.

With Azubuike out and freshman Mitch Lightfoot and junior transfer Dwight Coleby the only other big men options behind Lucas, the desire now seems to be for Bragg to become more solid than sensational.

“It wasn’t a problem (against UNLV) because Landen didn’t pick up his second foul until the second half,” said Self of dividing up the big man minutes. “But Carlton got two (fouls) early, in six minutes, which, to me, is inexcusable, and then I put Mitch and Dwight in the game. Mitch did fine. Dwight fouls twice, one 94 feet from the basket at the end of the half. So we’ve gotta tighten up things from an intellect standpoint and hopefully play a little smarter.”

Lucas, who recently has shown signs of life after a similarly frustrating start to his own season, played big against the Runnin’ Rebels and — 12 rebounds in 27 minutes — and said he believed KU’s bigs were prepared to proceed without Azubuike.

“I think we did a pretty good job of staying out of foul trouble early on. So we haven’t really been tested yet,” he began. “But the guys gotta be ready to come in and play. They’ll get their mind right and understand that even if you’re in for a minute or 30 seconds at the end of the half, whatever it may be, that could be a big momentum change in the game. They’ll figure it out.”

Without going into detail about substitution patterns or how he planned to divvy up the minutes, Self more clearly spelled out the pecking order of the Jayhawks’ four remaining front court players, with Lucas and Bragg being the first two options.

This could be a blessing for Carlton, long term. Right now, he just doesn't seem to like or relish contact around the basket. The face up jumper will continue to be there, and hopefully, he finds the touch on it again soon. I've never seen him shoot a jump hook from in close, but his length and build appear to be made for the shot. I assume he has never developed the jump hook as a part his package. To translate to the next level, you better like contact and be able to score around the basket, AND develop the ability to step out to the arc with accuracy. Carlton is at a crossroads in his development and success would mean big things for KU basketball, and for Carlton.

The long term blessing should also go to Azubuike. Since the injury occurred to his left wrist, he can work on this FTs everyday. The way his shoots his FTs, it can be like a TO every time he touches the ball when going against teams that have some big depth. Shooting FTs at 3X% clip in the spells certain disaster.

As great as Jackson has been, he's got to get his FT percentage up a lot by March. ESPN reports scouts are dropping Jackson's draft stock because of his FT and 3pt shooting difficulties.

good points Humpy. I will say that Carlton just does not look 6'10" 240. He probably is, but he just does not bang inside like someone with that size usually does. I like him and think he will come on, we need him no doubt.

Coach Self is toying with the fans and media. Match ups will dictate that Bragg play the 4 at times.

There will absolutely be times when we need both Lucas and Bragg to play at the same time. I don't see how we beat Kentucky without having both players out there at times.

The biggest thing we lose with Bragg and Lucas will be on the offense. Bragg hasn't been able to use his length and speed to help get the ball up quickly and when not out on a break, the scoring options are much more limited.

Merry Christmas Jay and everyone else on the board.

I felt that Carlton gave a lot of effort against UNLV. He was moving quickly on defense. He still seems to want to stop and think before making an offensive move. It seems, and same with Mitch, he isn't ready for any physical contact and gets pushed under the basket where he cannot get a board or when he does can't score.

The problems definitely occur more often on the offensive side. When Bragg and Lucas both have their heads in the game, they play solid defense most of the time.

Bragg is a huge disappointment so far. He is constantly out of position and looks goofy and awkward at times. It just seems to be his nature.

Bragg has a lot of talent and is an intelligent guy. He'll figure it out. He just needs to get his confidence up and learn the nuances of his new role. He'll get there and his early missteps will just be a side note on the season.

I second your astute comments Humpy.

The only thing I am sure of is that Coach Self and his staff will handle this in as effective a way as they can. Circumstances have forced him to "ration" the bigs if foul trouble occurs.

At UNLV, Carlton and Landen did play together a little, but that was because Landen stayed out of foul trouble against a fairly weak team. When we have to go against our primary competition in the Big 12, playing them both at the same time will likely be problematic.

The good thing is that, because Josh and Svi show considerable versatility and Frank & Devonte do their share of rebounding as well, KU will continue to be an excellent team.

At UNLV, it looked to me like they were trying harder to push the ball up the court faster to try to penalize teams that crash the boards to take advantage of what they see as a weakness in KU's rebounding with a smaller lineup. Will be interesting to see how that materializes.

Duke beat UNLV by 50 points at a neutral site. If we played both halves with the same intensity as we did in the first, we would have been pretty close to that number.

This isn't really meant to be a comparison as we beat Duke but Kansas seems to trend one really good half and one not so good. Yes, this was the last game before Christmas but as I said, Kansas loses focus if they played a really good first half or after a lackadaisical first half, they come out and take care of business.

That isn't a formula for winning #13. No doubt we are favored and should be but I would like to see more consistency. What a shame it would be to blow the opportunity to tie UCLA's accomplishment back in the 70s.

Bragg is going to have to pick up minutes from the 5 or 4 spot. Despite Self's "coach speak" what alternative do we have?

When we go 'big', Bragg will be at the 4. When Lucas is in foul trouble -- and let's be honest, when wont he be ? -- Bragg will be there, with some Colby and Lightfoot.

The game will grind a bit more during conference season with the familiarity of the teams. The fouls will also likely kick up as well. Bragg has to be as good as he was last season, if not better in order to help this team out.

Coleby has scored 12 points in 9 games so far. Against UNLV, in barely over one minute had 2 personal fouls. Time for him to step up and play like a third-year player. If ever he had a chance to prove that he is worth his spot, this is it.