With his left wrist in a soft cast and a sad stare on his face, Kansas freshman Udoka Azubuike watched Thursday’s 71-53 Kansas victory over UNLV in street clothes from the end of the KU bench.

It was a much different position than the one the KU big man had enjoyed during the six previous games, when he became a starter on the No. 3-ranked team in the nation and seemed to take one step after another in his development as a college basketball player.

Injured Tuesday during KU’s final practice before leaving town, the 7-foot freshman will miss the rest of the season with damaged ligaments in his injured wrist.

“No. Not at all,” said KU coach Bill Self after Thursday’s game when asked if he knew that at the time of the injury that Azubuike’s season could be in jeopardy. “We just knew he hurt his wrist. He finished practice. And then after practice (associate director of sports medicine) Bill (Cowgill) said we needed to get it looked at.... It’s in a bad spot and the MRI confirmed it was torn.” 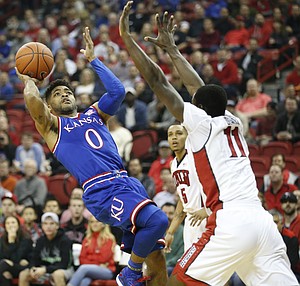 Asked how the injury happened, Self called it “kind of a freak deal.”

“It wasn’t a play,” he said. “I think he was just banging on somebody and got his hand kind of caught in a shirt and somebody hit his hand in an awkward position.”

“We miss his presence,” freshman Josh Jackson said of Azubuike. “It’s sad that we don’t have him, but the next guy’s gotta step up and guys have to help fill that big hole.”

Added junior guard Sviatoslav Mykhailiuk: “We just all have to step up and get together and be us.”

Although there were more UNLV fans at Thomas and Mack Center than Kansas fans, the visiting team had a pretty loud and proud backing from a number of Jayhawk fans who made the trip to KU’s final non-conference game of the season.

“By now, I’m used to it,” Lucas said with a smile. “It seems like the farther we go we have a bigger crowd. It was awesome to see all those KU fans. We really do appreciate it and it helps us get the wins in tough situations.”

Although it likely will not fly as a good excuse with the KU coaching staff, a couple of Kansas players said Thursday’s sluggish second half may have been the product of guys thinking about getting home for the holidays.

Because so many Kansas players were hustling out of the Thomas and Mack Center to catch flights home immediately after the game, that 22-point halftime lead might have been a trigger to start vacation early.

“One hundred percent,” Lucas said. “We’ve got guys thinking about flights, thinking about being home with family, which is OK, but you want to push that off until after the game. This game could be kind of a trap game, going home for Christmas and stuff and we knew we needed to come out here and handle business and we did that in the first half.”

The Jayhawks, who entered Thursday’s game shooting 60 percent from the free throw line, knocked that number back into the 50s with an 8-of-17 showing (47.1 percent) from the charity stripe in the win over UNLV.

Had the Jayhawks connected on more free throws, UNLV never would have been able to climb as close as a dozen in the second half. But it did not seem to matter who was at the line, the Jayhawks missed the second half of several trips to the free throw line throughout the game, causing Self to throw his hands up and his head back on the bench, much the way he has done throughout the season.

Josh Jackson (2-of-5) and Frank Mason (4-of-10) accounted for all of KU’s misses from the free throw line on Thursday. Lucas, the only other KU player who attempted a free throw, made both of his foul shots.

Kansas remained perfect all-time against UNLV and extended its lead in the series to 6-0... Thursday marked the Jayhawks’ first win over the Runnin’ Rebels in Vegas... Josh Jackson’s 21-point showing was one away from tying his career-high... Sviatoslav Mykhailiuk’s 20-point night put him three points shy of tying his career-high... KU’s 11 consecutive victories marks the 12th time in the Self era that KU has enjoyed a winning streak of 11 wins or more... Kansas is now 5-1 in games played outside of Allen Fieldhouse this season. 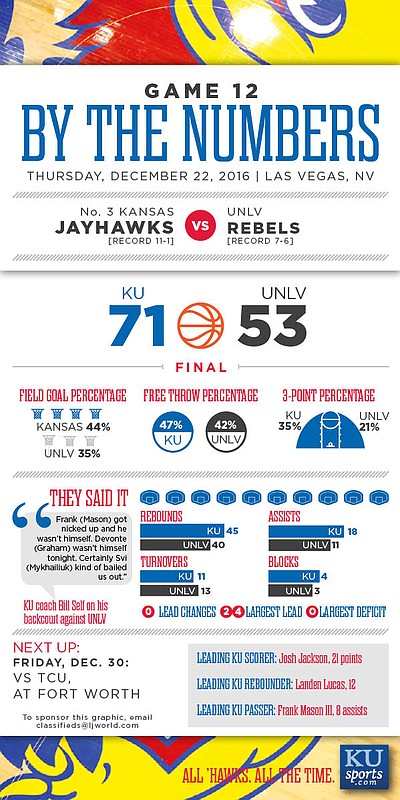 So it was Hudy's fault!

Keith Gellar is never going to live down his moronic comment about the injury being Hudy's fault, no matter what else he posts.

Was it really more moronic than the idea that Perry Ellis has the same skills, position and NBA potential as Harrison Barnes...

The last "FREAK" injury I recall hurt us as well...one Mr. Wayne Simeon when he went up to block a shot and got into the net/rim and injured his shoulder...(if I recall correctly)... Keys now: 15 points per game from the bigs (combined) AND MAKE OUR DAMN FREE THROWS!!....RCJH!!

15 points (combined) could be a real stretch for our bigs.

I have never seen such stellar defense by both teams defending the free throw line. In the first half KU somehow held UNLV to 5-17 at the charity strip while UNLV force KU into shooting 5-10. KU fans at the game lamented the poor free throw shooting, but the UNLV fans in my section were even more frustrated. I will say that the UNLV students behind the one goal do create some distractions with their twirling signs, but KU shot even worse at the end with no fan distractions (rows of press).

Does Dok's family still live in Nigeria? Feeling bad that the young 17-year-old is hurt and maybe on his own over the break. What about Svi? And Dwight? Do they all stay in Lawrence? Maybe Cindy will host a slumber party with some home cooking.

Really disappointing to see such a bad night from Frank. It must have been Hudy's fault, because he was equally bad from the field.

It was great to see Svi and Josh step up from the field and have big games when the rest of the team wasn't.

Really looking forward to the trip to Sac in a year or so. Hopefully have a chance to get reasonable seats/$. Was just commenting to friends that while it is always nice to hear The Chant, it is even better to hear it on the road.

It sounds great in MSG whenever The Champions Classic plays there. Even better this year since they won the game.