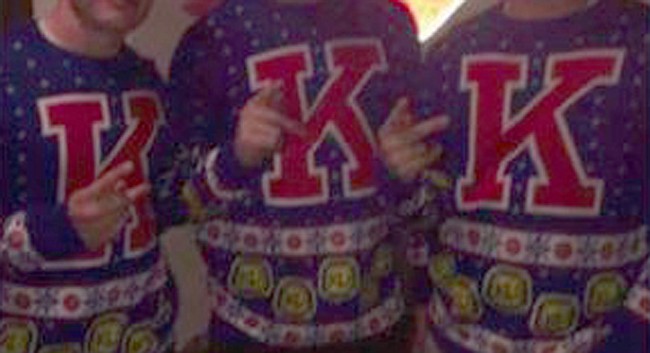 This screenshot shows a message sent out on the Snapchat account of a University of Kansas cheerleader. KU officials have suspended that cheerleader, a female student, as well as the three men in the photo, who are also cheerleaders. This screenshot has been brightened to show additional detail.

Four University of Kansas cheerleaders linked to a Snapchat post bearing the message “Kkk go trump” are no longer on the squad.

KU’s semester ended Friday, and one of the three male cheerleaders in the photo graduated, said Jim Marchiony, KU associate athletic director for public affairs. The other two men and the female cheerleader on whose Snapchat account the image appeared chose to resign from the squad, Marchiony said.

The cheerleaders had been suspended from performing since a few days before Thanksgiving. 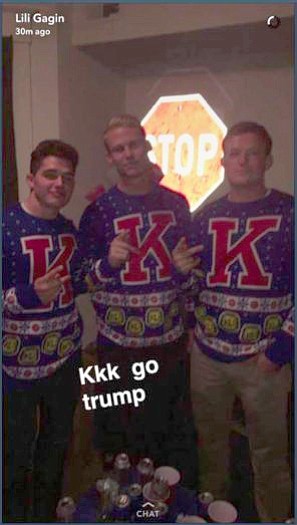 This screenshot shows a message sent out on the Snapchat account of a University of Kansas cheerleader. KU officials have suspended that cheerleader, a female student, as well as the three men in the photo, who are also cheerleaders. This screenshot has been brightened to show additional detail.

The photo shows three white men standing side-by-side in sweaters with the letter “K” for Kansas on the front; the so-called KU ugly holiday sweaters featuring Jayhawks on the arms and championship rings around the middle were sold en masse in the KU Bookstore in December 2015. The photo was posted with the text “Kkk go trump” on the Snapchat account of Lili Gagin, a white woman who was listed on the KU Spirit Squads roster as a sophomore from Grayslake, Ill.

The photo was shared widely online, where some social media users said they interpreted it as racist speech indicating support for the Ku Klux Klan, while others said it looked like a political joke against President-elect Donald Trump.

KU Athletics learned of the photo via social media during the Nov. 21 KU men’s basketball game and quickly suspended Gagin (who was not cheering at that game) pending further investigation. The three men were suspended the next day.

Gagin told KU Athletics someone else took her unlocked phone at a party a few days earlier and posted the image on her Snapchat profile. Gagin also posted on her own Twitter account: “I'm appalled that a snapchat was put out on my snapchat and posted on my account. I would never of done that & I apologize that it happened.”

It’s unclear whether the incident led to any discipline of the students at the university level.

Marchiony did not share more details about the cheerleaders’ resignations, and KU spokeswoman Erinn Barcomb-Peterson has declined to share any information on the university’s investigation of the incident. Gagin has not responded to emails from the Journal-World, including one sent Thursday. 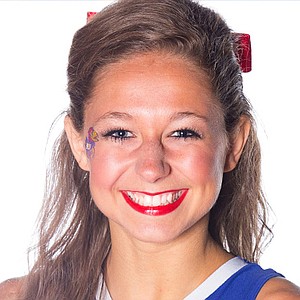 KU has not formally released any of the cheerleaders’ names. Gagin’s name is on the Snapchat account and was included in a Twitter post by another user that KU Athletics and KU both shared the night she was suspended.

KU Athletics tweeted, “Unacceptable. She is suspended from cheering pending formal investigation. This behavior won’t be tolerated. Will be dealt w/ appropriately.” KU retweeted that post, adding, “There is no place for this in our community. These types of messages are unacceptable.”

KU Athletics and KU both deleted those tweets the following day.

Way to go Merica, opened the door to more of this crap. More "deplorables" just left the building!

I'm so tired of the GOP being referred to so derogatorily. Most of my friends are conservative and I have only a handful that I have ever heard say anything but things to defend those of other races. I'm not sure why I'm even wasting my time trying to explain this to a person who thinks this way. I'll go ahead and stay a deplorable. Thanks. I'm also a proud KU grad.

I want to know what the three guys did wrong, i.e., besides posing for the picture. Article makes no mention if they did or did not know.about the post.

Do you see the picture? Are you that friggin' stupid?

Brett, I'm going to give you a mulligan, then I'm going to get irate. The article makes no mention of what the three yell leaders were thinking at the time, or what led to them off the squad. Maybe they confessed to doing it on purpose, or maybe Lili saw an opportunity to do this and did it. I don't buy that someone swiped her phone and did that...that's not believable. But it is totally believable that three people wearing the same sweater might pose for a picture. And it does not look like they are pointing, just making a hand gesture. I have a photograph from 25 years ago at the Aloha Bowl w/one of the KU players making a similar gesture in a similar pose.

My point is that the article seems incomplete. Doesn't even say that the Athletic Department wouldn't comment on the resignation of the two yell leaders.

I really hope you can get past your desire to get angry and see that I asked an honest question. If the photo and post was purposeful among the four, then fine. If not, that's a different story.

We don't know, Joe. It could have been purposeful on the part of the three or not. We have no evidence either way.

Stupid is as stupid does. Good riddance dipsh*ts.

It's a little surprising and amazing that, with so much information easily available to anyone with a computer, that three stupid, cowardly d-bags can't even be bothered to do a little historical research. My recommendation? Head over to Troost with your sweaters and your hand gestures and take the photo on a corner there. I'd like to see how funny that would be! Hilarious! Tough guy racists are always half-that, just racists. The tough-guy part always escapes them.

Since you are too friggin' stupid to manage a google search on your own, here's a link for you: http://eji.org/national-lynching-memorial.

Some more liberal "tolerance" and "inclusion"....

Are you seriously upset about 4 cheerleaders getting removed from the squad for a racist snapchat? Further, what does being anti-KKK have to do with being liberal? I would imagine that most conservatives don't support the KKK either.

At the very least this was poor judgment and people lose their jobs/privileges every day for poor judgment. The people involved in this incident are no different and they learned a valuable lesson. As far as tolerance and inclusion, none of the four students were kicked out of the university which seems pretty tolerant and inclusive to me.

These fool kids were reported to be mocking Trump and his supporters, or so they thought.... They were just doing what the liberal media teaches them every day. "Trump is KKK"... "Trump is a NAZI".....

The good news for these kids is that they've learned about liberal hypocrisy and dishonesty a bit younger than many of their college pals. They can go forward and succeed in life without leftist lies and stupidity cluttering their minds.

Where did you get that information? Did you speak with these kids directly? The only statement I have seen from Lili Gagin herself is only that she claims that she did not post this message. There is no mention of this being a political joke or satire. Had she made that claim and stated that there was a misunderstanding with the meaning behind her words then I would be right there with you. However, that does not appear to be the case. All I see is denial from those involved.

Your theory is that actual KKK members sign up to be college basketball cheerleaders?

Gonna stick with that? Really?

No kidding Jay. They would have known if these guys were racists a lot sooner than this. KU athletics department acted like PC cowards.

They were not removed from the squad. KU administrators acted like cowards over the whole issue and did not even do an investigation.

This is such a sad deal. I feel bad for everyone involved. I'm old and I did all kinds of things when I was young. Sadly, a bunch of it much worse than this. Much of it didn't reflect my overall character, just that I could be stupid at times around friends and drink. Thank goodness we didn't have social media back in the day or I can assure you I wouldn't be in my current station in life. This isn't about left or right, red or blue, this is about young kids doing what young kids often do, which is they do dumb stuff at times because they are kids. Adults do dumb stuff every day. Repentance, forgiveness and "do overs" seem to be in short supply these day. We are all fast to ask for forgiveness for ourselves and fast to condemn others. OK. Whatever. I guess it is on with Christmas.

I agree. I am not judging those involved, I too am no saint and made some pretty dumb decisions when I was younger and I am sure I will make more mistakes throughout my life. The thing is, there were always consequences for my mistakes, and this just happens to be a consequence of theirs. They are off the team, but still allowed to attend school. They didn't get expelled and they will learn a lesson about being more careful with their words and representation on social media. No one was put in jail, no one was expelled, they just learned a lesson the hard way and lost the privilege to be on the cheer squad. Their lives are not over.

Jay Scott, I'm not sure where you made that leap in logic. I did not make the accusation that any of the individuals involved were members of the KKK. I said that posting a racist Snapchat has consequences. They may have meant it as a joke or as satire, but that is not what they claimed, they just denied having anything to do with it.

I'll try to be more clear. The post was racist, it is unclear whether those involved are. As such, they lost a privilege to be on the cheer squad and learned a valuable lesson about social media. Their lives aren't ruined, no fines, no jail time, no one expelled.

In any case, I don't suppose I will be changing your mind so there isn't any use in continuing this conversation. You are a Jayhawk fan and that is good enough for me, but we will have to agree to disagree on this subject.

Posting from my phone. Sorry this isn't a direct reply.

You're arguing with yourself bro. Of course it was inappropriate and stupid.

The more obvious reality is the 99% probability that it was inspired by bigoted left wing media. These kids are far more likely to be hypocrite liberals than racists.

Stephen, you are spot on. The post was just dumb. She probably didn't intend to be racist, but in this context it doesn't matter. The role of the three guys is not clear.

If they only had burnt down minority owned businesses and looted they would have still been on the squad.

Fine fine, I get the message, Liberals are self-righteous, crybaby, godless sodomites and Conservatives are ignorant, racist, bigoted a-holes.

Can I get back to my Christmas Eve now?

Something that is entirely possible is that the two yell leaders who resigned did it because they felt the Athletic Department didn't have their back for whatever reason. There's a whole slew of information and facts we don't have from this exceptionally poorly written and researched article. And here we are arguing about facts we don't have.