While en route to Las Vegas for tonight’s first true road game of the 2016-17 season — 8 p.m. vs. UNLV at Thomas and Mack Center — Kansas men’s basketball coach Bill Self on Wednesday was nominated for inclusion in the Naismith Memorial Basketball Hall of Fame.

“I consider this an honor to be nominated,” said Self said via press release after hearing the news. “I certainly didn't expect this. I’m proud, mainly because of the teams’ successes we’ve had in the various stops that put me in a position to be considered.”

The nomination came on the 125th anniversary of the invention of the game by James Naismith, who brought basketball to Lawrence from Springfield, Massachusetts, site of the Naismith Hall of Fame. The game’s handwritten rules, penned by Naismith, who went on to become the first coach at KU, currently reside in the DeBruce Center adjacent to Allen Fieldhouse on KU’s campus. 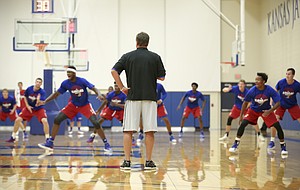 Kansas head coach Bill Self watches as the players rapidly shuffle across the court during Boot Camp in the practice gym on Friday, Sept. 23, 2016 just after 6 a.m.

In 24 seasons as a head coach at Oral Roberts, Tulsa, Illinois and the last 14 at Kansas, Self has recorded 602 victories against just 189 losses.

That includes a 395-84 mark at Kansas, where Self famously has won more conference titles (12) than he has lost home games (9).

His .825 winning percentage ranks first all-time among the eight coaches who have led the Kansas basketball program and he has earned four national coach of the year honors and six Big 12 coach of the year honors while leading the Jayhawks to 12 consecutive Big 12 regular season titles, a streak that remains in tact and is on one away from tying UCLA’s all-time record of 13 straight from 1967-79 under two different coaches.

While Self will have to wait until April 3 to find out of he will be enshrined as a part of the 2017 class — finalists will be announced Feb. 18 — many who have worked with him or marveled at his success inducted him into their own personal Hall of Fame long ago.

“Coach Self is one of the elite coaches in the nation,” KU athletic director Sheahon Zenger told the Journal-World. “He has been a winner everywhere he’s been and his record and conference championships while leading the tradition-rich Kansas basketball program speak for themselves. He certainly is deserving of the highest accolades and honors.” 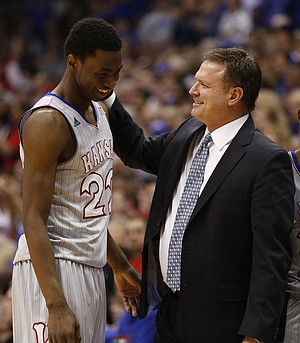 Self’s 18 tourney appearances have produced one national title (2008), two Final Fours (2008 and 2012), eight trips to the Elite Eight and 11 Sweet 16 appearances. He also has guided his teams to eight conference tournament championships, including seven as the leader of the Jayhawks.

“We are very fortunate to have him as our coach,” Zenger said of Self. “And even more fortunate to work with someone so down to earth and personable every day.”

I've never agreed with this philosophy for any form of honor. No need to wait until everyone is old and retired before recognizing a career's worth of excellence.

Couldn't agree more Brett. If it's deserving, give whomever their just do. Self is more than deserving.

8 Elite Eights with only 2 Final Fours as a result.

Not that Self isn't a deserved HOF coach, but that is a super ugly stat compared to other elite current coaches.

still ...8 Elite Eights is pretty damm good. I wonder how many coach K and Cal have?

Agree Suzie, it is damn good. I always wonder when people make comments like Daniel, what the magic number is that makes it worthy or less ugly, Is it 8 and 4? 8 and 6? In a crap shoot one and done tournament, I'm not so sure 8 and 2 and 1 isn't too shabby. To each his own I suppose.

Way too soon but cool stuff

What makes it not too soon Michael?

I was kinda hoping this would come next year in San Antonio when the team celebrates and defends the '08 title.

Well deserved honor for a great coach and leader of young men.

In Self We Trust... Coach Self deserves to be in the HOF. In my humble opinion, he is the 3rd best Coach of all time, eclipsed by only Coach Naismith and Coach Allen.

I'm going off topic here: According to ESPN, Udoka Azubuike tore some ligaments in his left wrist during Tuesday's practice and is out for the rest of the season. It is time for the bench to step up their play.

Very nice this has happened with his son on the team who seems to enjoy the time around his dad. It's his time. Congratulations, Coach.

The usual "lump of coal" and "weaned on a pickle" awards for Michael. Too soon? Give me a break.