Kansas forward Landen Lucas (33) gets tangled up between Davidson forward Will Magarity (22) and Davidson guard Jack Gibbs (12) going for a loose ball during the first half, Saturday, Dec. 17, 2016 at Sprint Center.

While Davidson’s hot outside shooting propelled the Wildcats to a one-point halftime lead, the No. 3-ranked Jayhawks refocused late with the help of a senior and a freshman.

Veteran Frank Mason III and first-year star Josh Jackson carried the offense in the second half and KU rolled to an 89-71 victory. 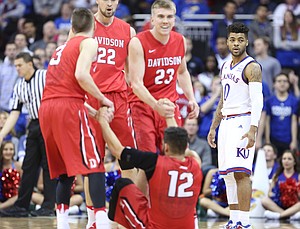 The Mason-Jackson one-two punch accounted for 21 of KU’s final 47 points as Kansas improved to 10-1 on the year. They both scored 18 points to lead the Jayhawks in front of a KU-friendly crowd.

• The game turned when: Jackson got to stay on the court in the second half and the Jayhawks finally made a shot from beyond the three-point arc.

Davidson made its big first-half run after Jackson’s second foul kept him on the bench, next to Bill Self and the rest of KU’s coaches. Jackson only played 11 first-half minutes and in the meantime the Jayhawks couldn’t figure out a way to slow down Davidson’s hot three-point shooting.

The Wildcats thrived from long distance throughout the first half, hitting seven of 16 before intermission — led by Peyton Aldridge’s 3-for-5 accuracy — to take a 43-42 lead into halftime.

That display gave Davidson plenty of confidence to continue firing in the second half — at least early. Both Aldridge and Will McGarity connected from deep to open the second half, quickly extending the Wildcats’ lead to five.

But Jackson’s presence made a significant difference for Kansas on both ends of the floor over the course of the decisive closing stretch. The Jayhawks even ended their 0-for-the night 3-point shooting when the 6-foot-8 freshman from Detroit drilled a trey with 17:09 left in the game.

Jackson scored 18 points in the victory, while KU sank six of 13 from long range during the second half, far better than its 0-for-8 first half that even included a Mason air ball.

• Offensive highlight: Davidson had issues with Jackson all night and that proved to be the case on a second-half possession when the freshman saw a chance to drive from the perimeter. Jackson crossed over hard, sending his man to the floor in a heap, before dishing to Lucas for an easy two-handed jam.

KU’s next bucket came on a Lucas slam dunk, too, with Devonte’ Graham setting him up for an easy lob that broke a 58-all tie.

KU’s ability to score inside proved crucial throughout, too. At one juncture in the first half, 26 of the Jayhawks’ 29 points had come on baskets in the paint. Kansas outscored the Wildcats 32-16 inside in the first half and 48-22 in the game.

Jackson hit Davidson with another crossover from the left wing later in the second half, gliding effortlessly in for a layup that marked a 70-62 advantage for Kansas.

Although Gibbs made the game’s first three-pointer of the night in the opening minute, Mason and Graham contested nearly every other look he got from that point on. KU’s guards harassed Davidson’s go-to guy into a 3-for-14 shooting night overall. Gibbs went on to score four of his 12 points at the free-throw line.

• Key stat: Three-point shooting. Kansas couldn’t get a perimeter shot to drop in the first half, and at times it seemed Davidson couldn’t miss.

The script flipped in the second half, though, as Kansas knocked down six of 13 from deep. The Wildcats couldn’t keep pace without the power of the three-ball. Davidson only shot 3-for-11 from downtown down the stretch in the loss.

• Up next: The Jayhawks head west for their first true road game of the season, Thursday night at UNLV. 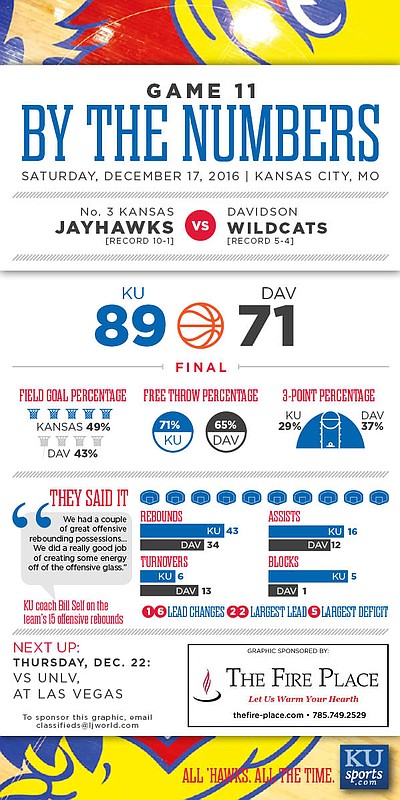