No, the season didn’t go as well for Kansas football as Dorance Armstrong Jr. would’ve hoped. However, the sophomore defensive end entered the winter offseason encouraged.

“Last year my numbers weren’t even close to what they were this year,” Armstrong said following the Jayhawks’ season-ending loss at Kansas State, “and me getting injured in (preseason) camp, to come back and put up those numbers, it kind of shocked me. But I’m very proud of how I played, how our defense played and all of that.”

The numbers the 6-foot-4, 246-pound lineman referenced got his name associated with other conference stars, such as offensive player of the year Dede Westbrook (Oklahoma) and fellow first-teamers D’Onta Foreman (Texas) and Baker Mayfield (Oklahoma). Armstrong led the Big 12 with 20.0 tackles for loss and ranked second in sacks, with 10.0 — trailing only defensive player of the year Jordan Willis (11.5), of Kansas State.

As the 2016 season neared it completion and Armstrong kept terrorizing opposing offensive lines, those working at Anderson Family Football Complex began wondering whether the young end might nab the award for top defender himself.

“Statistically, and really just as you watch his play throughout the year, I don’t know how you leave him out of that talk,” Kansas head coach David Beaty said late in the season, asked about Armstrong making a run at the Big 12’s defensive player of the year award. “He’s easily one of the best players in this conference, if not the best player on the defensive side. Whether it comes to what team you’re playin’ on or not, that’s not for me to say. But I know this: I’ve seen some really, really good football teams — good football players on great teams. And I’ve also seen some really good ones on teams that weren’t so good. It comes down to production. We’re still playin’ against the same guys they’re playin’ against.”

Though the award ultimately went to senior Wildcats end Willis, Armstrong all but cemented his first-team spot during KU’s upset victory over Texas, in the Jayhawks’ home finale. Not only did he record three tackles for loss, two sacks and force a fumble, Armstrong racked up 11 tackles, a rare feat for a lineman.

“I feel like it all came from how much pressure the coach put on the D-line,” Armstrong said of his best overall performance. “They talked about how good Texas O-line was and the game was gonna be mainly on us. As a group, all week, we have to go out there and grind all week.”

Kansas defensive coordinator Clint Bowen reached a point this season where he expected Armstrong to produce as one of the league’s elite defensive players on a weekly basis.

“Dorance is a legitimate, pass-rushing, every-down defensive end,” Bowen said. “He has a great skill set. You don’t have to take him out and hide him in run situations. He can anchor in. He’s what everyone wants and he’s playing at a high level.” 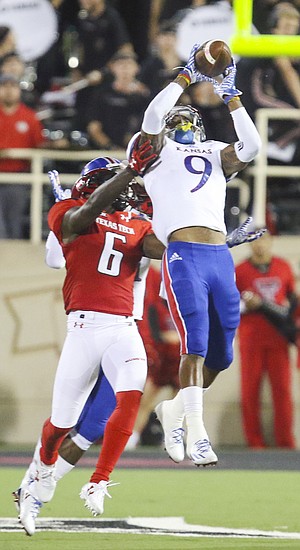 While Armstrong proved to be the only representative form KU (2-10 overall, 1-8 Big 12) on the AP’s first team, two other Jayhawks earned all-league distinctions, as well. The interior strength of sophomore defensive tackle Daniel Wise and the range and play-making in the secondary from senior safety Fish Smithson landed both Jayhawks second-team spots.

From constantly applying pressure on offensive linemen, to producing 10.0 tackles for loss in a season during which he made 38 total stops and even blocked two kicks, Wise, who also produced three sacks, became a lineman offensive coordinators and quarterbacks couldn’t ignore. The 6-3, 285-pound tackle from Lewisville, Texas, even returned a fumble and broke up a pass while doing the dirty work at the line of scrimmage.

As a team captain operating at the back end of the KU defense, Smithson did a bit of everything. Same as the year before, the safety led the Jayhawks in tackles, this time coming through with 93 stops — 70 solos. The 5-11, 190-pound team leader from Baltimore took away a team-best four interceptions in his final season and broke up seven other pass attempts. On the year, Smithson forced two fumbles, recovered one, made 2.5 tackles for loss and had a sack, as well.

While Armstrong made the All-Big 12 first team released Tuesday by ESPN.com, too, he wasn’t a lone Jayhawk on that list. Wise played well enough to join his fellow sophomore lineman as a first-team selection. 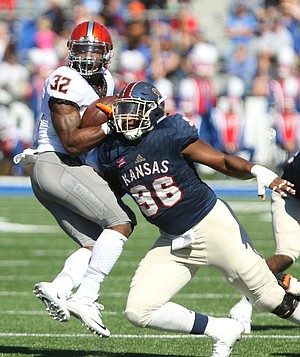 Any discussion on whether Armstrong will leave for the NFL after next season?

Been wondering the same. It would be a good news, bad news scenario. I'm assuming that Beaty is thinking about this, too. It might explain the Keyshaun Simmons signing, to provide depth the following year at the position.

Dallas Morning News reports, 12/7, that Baylor has only one 2017 commitment and only 70 scholarship players following a 6-6 season.

BU is down because all but 1 or 2 from the last class defected. They currently have enough studs leftover that they got by for a while but they will feel our pain in a year or so when they have 0 depth and few upperclassmen. PSU and USC had enough tradition that they could withstand the lost scholarship players but I think BU will find out otherwise. Hopefully it brings the good folks in Waco to repentance.