Threes by example: Graham’s big first half sets tone for Jayhawks in 89-74 win

Kansas guard Devonte' Graham (4) and Kansas guard Frank Mason III (0) celebrate Graham's fifth three-pointer of the half during the first half on Saturday, Dec. 3, 2016 at Allen Fieldhouse.

More content to set up teammates than score so far this season, Kansas junior Devonte’ Graham could not help himself Saturday afternoon during No. 4 KU’s 89-74 victory over Stanford at Allen Fieldhouse.

In a game his team controlled pretty much from start to finish, Graham staked the Jayhawks (7-1) to an eight-point halftime lead behind 5-of-8 shooting from three-point range while playing all 20 minutes of the first half.

All of Graham’s first-half treys were well timed, either giving KU a shot of emotion or valuable separation. And all of them came in rhythm, with Graham drilling three out of transition and two more from out-of-bounds plays.

“I think (KU sophomore) Lagerald (Vick) let me borrow his basket in the first half,” joked Graham, referencing his teammate’s perfect shooting night last Tuesday in a win over Long Beach State.

After the game, KU coach Bill Self said Graham was “the reason we had the lead” at halftime. But it was his teammates who salted this one away.

After the red-hot first half, Graham did not score a single point in the second half, finishing with 15 points, four assists, two rebounds and two steals in 38 minutes.

“I think that’s just how it flowed,” a completely content Graham said after the game. “My trainer was giving me a little bit of stuff for not scoring in the second half but I told ’em I just didn’t need to because everybody else was making shots.” 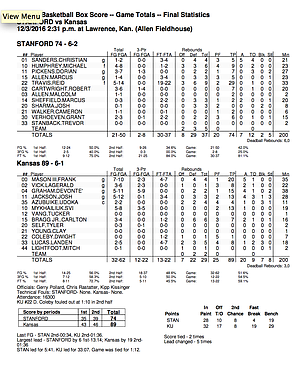 Frank Mason III scored 12 of his team-high 20 after the break, Sviatoslav Mykhailiuk scored all 13 of his points in the final 20 minutes and Kansas, as a team, shot 54.5 percent from three-point range on the day, connecting on 12 of 22 long-range shots.

While others heated up, Graham returned to his early-season form in the second half, looking more often to pass than to score. That worked, too.

Never better than with just under 10 minutes to play when Graham broke down his man at the top of the key, got into the paint and floated a soft and sweet early Christmas present to Josh Jackson, who said thank you in the form of a rim-rattling, one-handed dunk that gave Kansas a 68-54 lead.

A little later, after grabbing an easy rebound on one end, Graham hit Mykhailiuk with a perfectly placed alley-oop from mid-court that pushed KU’s lead back to a comfortable margin of 15.

Asked which assist would be more likely to wind up on his highlight reel, Graham was honest.

“The floater,” he said of the pass to Jackson, who finished with 13 points, four assists and three steals in 28 minutes. “Because Josh dunked it.”

After an 89-74 victory against Stanford on Saturday, Kansas basketball coach Bill Self met with the media to discuss Frank Mason III's strong performance, the disappointment with his team's defense guarding Reid Travis and much more.

In the middle of it all, Graham still found time to teach. There were moments when he helped teammates find their man, other times when he directed the action on both offense and defense and even one dead ball when he stood nose-to-chest with freshman big man Udoka Azubuike and emphatically explained how to execute what the Jayhawks were running.

Younger, less polished players might have been feeling themselves a little too much after finding the hot hand the way Graham did in the first half. But the junior guard’s performance against the Cardinal on a Saturday afternoon in December demonstrated perfectly where Graham’s mind is at heading into the second month of the season.

“I just enjoy winning,” Graham said. “Whatever it is that I’ve gotta do for us to win, if it’s passing, if it’s scoring, whatever it is, I just try to do it.”

Stanford (6-3) never truly went away in this one, which made plenty of sense given the mentality of their head coach, Jerod Haase, who once made a name for himself scrapping and clawing on the Allen Fieldhouse floor as a Jayhawk.

Although he plays a different position than his head coach once did, Stanford junior Reid Travis carried several Haase traits onto the floor with him on Saturday. Toughness, no frills, lots of hustle and more than a little fight all helped Travis record a career- and game-high 29 points to go along with nine rebounds and an opponent-record 22 trips to the free throw line.

“We didn’t do anything with him,” Self said when asked how his team defended Travis. “That was a total beat-down by him on our big guys. Whenever one guy can set the all-time record for free throws shot and free throws made against Kansas in the history of the school means that we didn’t guard.”

Travis did exactly that, eclipsing marks previously held by Rayford Young (18 makes for Texas Tech in 1999) and Craig Brackins (21 attempts for Iowa State in 2009), but Stanford had just one Reid Travis. And even though the Jayhawks only had one Devonte’ Graham and one Frank Mason and one Josh Jackson, each found his moment to shine and made life miserable for the visitors, an approach that already has become this team’s identity one month into the 2016-17 season.

“They’re a good team for a reason,” Haase said of the Jayhawks. “Because they’re not one dimensional. They have the ability to get to the paint, they have bigs that can score on dump-downs and post-ups and they have perimeter players who can light it up.”

Presented a little differently, Graham expressed similar thoughts about the Jayhawks’ balanced attack being such an advantage for this year’s team.

“It’s just hard to guard, you know,” he said. “If they pack the lane we’ve got guys that can make open jumpers and if they close out we’ve got guys on the perimeter who can make plays for others. It’s just good for us to have all those threats, and it’s kind of like a nightmare for other teams.”

Baseline View: Kansas takes over to bring down Stanford 89-74 by KUsports.com

More news and notes from Kansas vs. Stanford

another great win. man, their big destroyed all of ours. would like to see our FT % improve, still way too low.

When that "big" is allowed by the refs to bull his way through to the basket, even with three players guarding him, he's gonna shoot a lot of free throws. Travis is a hoss and will get his points. Kansas only needed to keep the rest of the Cardinal players in check. Mission accomplished.

The difference between Travis vs our bigs is he knows how to secure the ball in his hand, establish position and goes up hard closer to the rim.
Our bigs can compensate their weakness around the rim by catching those lobs and learn how to dunk hard from Udoka. Our guards are capable of throwing lobs anywhere anytime, theirs doesn't really have a chance.. our bigs are so capable of pick-n-rolling.. so, with our guards' strengths, we can really make our bigs shine.

Funny, because I thought, despite Mr. Travis doing everything for the Cardinal, Landen and Carlton played better today and were much more active. Not saying it was great by any stretch, but I thought it was better than I've seen any other game this year, other than the game Dwight had in KC. I even thought the game had some confidence building moments for Landen, and he sure acts like he needs that.

Where is the box score?

If you can't find it in one of the articles, you can always find it by going to "Schedule" above and then scrolling down to the game you're looking for. It's listed to the right of each game.

Midway through the second half, I was thinking about how quiet Svi had been, and then he went off for about 3-5 minutes! Wow!!!

The thing that has been impressive to me is how well they switch and help on D. It helps to have wings that are 6-5 to 6-8, but it is surprising how well the new guys have learned so far. Bragg and Lucas seem to be settling in nicely also. Still lots more room for improvement, but at least it is giving Coleby and Boo a chance to get some minutes. Dwight in particular is night and day from his first game. He seemed sooooo tentative that game.

I had the same thought. I even said "Svi's been quiet tonight" and then he went off and did a little of everything over the next 5 minutes.

I am actually encouraged by the play of the bigs in this game. Perfect? no, but improving. RCJH, and Frank made himself smile.

JW: Your sound is set TOO LOW! My computer is set on max, but I can't hear anything but a murmur. Those who get it anyhow should be allowed to turn their computer down!