Kansas setter Ainise Havili runs down a ball during the Jayhawks' five-set loss to Creighton in the second round of the NCAA Tournament on Friday, Dec. 2, at Horejsi Family Athletics Center.

The closer a team comes to winning only to lose, the tougher it is to digest.

It’s difficult to imagine a team in any sport coming much closer to victory only to fall just short than Kansas did in the second round of the NCAA volleyball tournament Friday in Horejsi Center.

Creighton survived and advanced with a 3-2 victory taken in an extremely suspenseful fifth set that required extra points to decide. The 20-18 score only hints at the competitiveness of it. The schools were tied 15 times in the fifth set alone and Creighton didn’t put Kansas away until its seventh match point. 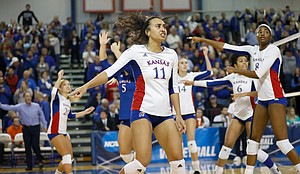 Afterward, Kansas coach Ray Bechard sat at the table for the press conference, flanked by the team’s three seniors.

Cassie Wait, Big 12 libero of the year, had no voice left because she had spent it communicating on the floor. She answered the questions with a scratchy whisper.

Tayler Soucie, who had played such a huge role in willing Kansas to an 8-0 record in fifth sets heading into the night with so many blocks, tried to talk without crying, but failed, so she did both at the same time.

Maggie Anderson, who finished the tournament with four service aces without an error, kept her composure, although Bechard almost lost his talking about how much Kansas volleyball meant to Anderson and how much he’ll miss all three seniors.

The loss ended KU’s dream of returning to the sport’s biggest stage for a second consecutive year three victories and one regional short of the 2015 postseason accomplishment. One year after reaching the Final Four for the first time in school history with an upset vs. No. 1 seed USC, the Jayhawks (27-3) grabbed another first by winning the Big 12 title, finishing a game ahead of Texas.

“I think we were pretty pumped when we saw we were coming to Kansas,” Creighton junior setter Lydia Dimke said. “I know a lot of people could be saying, ‘Oh, Kansas is a hard draw,’ but we were saying, ‘Yeah, we want to come back and beat them and we want to do it in fashion on their home court.’ We were excited and we remembered that. That game (in September) was a tough loss that we’ve remembered all season. We weren’t going to let it happen again.”

“Hats off to them on a phenomenal season,” Bernthal Booth said. “To some degree we’re playing with house money and I think the pressure is tough. They obviously gave us everything we could handle. It was surreal.”

Kansas junior Kelsie Payne, Big 12 player of the year, repeatedly rifled lasers in big situations and finished with a game-high 26 kills and .375 hitting percentage. Classmate Ainise Havili, Big 12 setter of the year, contributed 53 assists and 18 digs on a night she struggled serving (four service errors). Wait had 27 digs, including a couple of fifth-set beauties that thrilled the crowd.

Bernthal Booth and Bechard both felt as if the match featured teams too good to face each other in the second round.

“I think it’s unfortunate we hit so early,” Bernthal Booth said. “Kansas should be moving on and I feel like we’re a team that deserves to move on. We’ve always known Kansas is a team of winners. To go 8-0 in fifth games all season tells you they know how to win. . . . I think at any level in any sport you want to win it rather than have someone lose it and I think that happened tonight.”

Bernthal Booth called it, “the best match I’ve ever been a part of.”

Bechard said it felt more like a regional final than second-round match, “with the energy and the teams playing at a high level.”

Heading into the night, Kansas had a 15-match winning streak and Creighton extended its winning streak to 21 matches, not the sort of streaks that typically collide so early in a tournament.

Creighton advanced to a regional semifinal match next Friday night in Austin against Michigan.

For Anderson, Soucie and Wait, it’s over.

“We gave them a few minutes, but obviously, it was pretty quiet when we got in there,” Bechard said of the post-match locker room scene.

The coach then shared with shaky voice an anecdote about a conversation between Anderson and associate head coach Laura “Bird” Kuhn. Anderson, Bechard said, had just received her "K" ring and instead of engraving it with "MA19," her initials and number as many players do, she chose “MDCT.”

Bechard paused after relating the story and said, “What do you tell a kid who feels that way about your program and your school after a match like that?”

Shades of March Madness: a vastly underrated team keeps it close enough that all the pressure falls on KU at the end, and KU falls just short.

As with the basketball team, it's a lot harder to be favored than to come up and surprise teams like KU did last year. (The 'Hawks were ranked high last year but were still something of an unknown going into the tourney; this year was different.)

Such a shame, but it doesn't take away from a tremendous season, and hopefully there will be a lot more great moments ahead.

UGH! What a way to go out! Awesome season though!

Thanks, Jayhawks, for another fantastic season. And, congratulations to an excellent Creighton team.

Bummer. Great season though. Ray's got a good thing going.

Hell of a season. The first Big XII championship in program history is something no one can ever take away from these athletes and coaches. And they deserved it.

Tough draw with Creighton to be sure. But if you want to be an elite team and an elite program you had better win in the opening rounds of the tournament when playing on your home court.

Hell of a season, Jayhawks. You represented the school with class and dignity.

Hats off to a special Senior class. Will miss watching you play.

Underclassmen, use this painful experience as a motivational tool for next year, when the Final Four is in KC.

It's sad that they lost but very cool that people actually care. Keep moving forward!

You play to win the game. Every game there is a winner and a loser. They played and after two times each team won once. Accept and appreciate the challenge. There will be a chance next season so look for the future.

I love this team, but are we overrated? Ray certainly has them playing well, but I noticed that this came strangely came down to us not having anyone who is a real threat when it matters except for Payne. When she rotated to backline, that is when the final set turned.

Burse phenomenal for a short leaping lizard player, but not dominant. I would venture that we need to recruit another player who physically is bigger, and a real threat, so that we cannot simply be rotated out of a match. Against a lot of teams we are ok, but when we are playing the big teams, and Creighton is a top team, then we need another option to rotate in addition to Payne.

Still I would never try to take anything away from this team. They were sensational, I am just looking more at the future.

Was bummed to see the final score, I see these ladies play, they are tough. Great season ladies, KU's gonna be in the mix from now on.

UGh....Tough loss. Would've loved to face Texas again for a trip to the Final Four! What a great Senior class! They will be missed. Next year the Final Four is at the Sprint Center is KC, so that will be alot of motivation for those returning!!! Especially since it will be Senior Year for a big group of Jayhawks! (Kelsie, Ainise, Madison, Tori, Kayla, and Addi) What a run that would be!! Great season kuvball! RockChalk!!