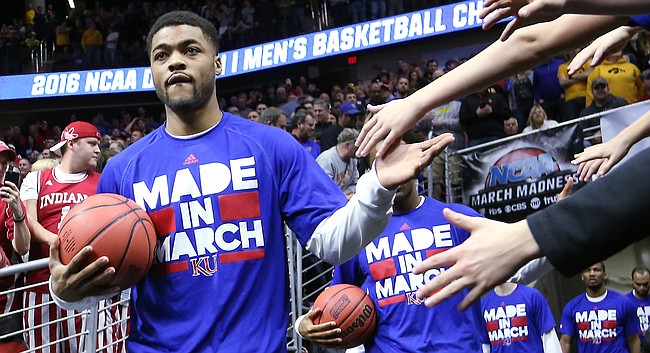 Frank Mason III leads the Jayhawks onto the court for their game against the Connecticut Huskies Saturday, March 19, 2016 in a 2nd round NCAA tournament game at Wells Fargo Arena in Des Moines, IA.

There was a lot of hype and, yes, even a few nerves in the hours leading up to Kansas point guard Frank Mason III throwing out the first pitch at Kauffman Stadium before Sunday’s game between the Kansas City Royals and Minnesota Twins.

But when all was said and done, the KU senior from Petersburg, Va., survived. Barely.

Standing tall on top of the mound during KU Day at The K, Mason, decked out in KU basketball shorts, a white Kansas basketball T-shirt and a Jayhawk-themed Royals hat, loosened his shoulders, cranked his neck a couple of times and fired his pitch. With five of his teammates standing on the infield grass behind him and backcourt mate Devonte’ Graham waiting at home plate, 60 feet, 6 inches away from where Mason let ’er rip, the KU guard certainly pulled off the look of a veteran pitcher, even if the pitch wasn’t exactly a strike. As Graham tracked Mason’s fastball from the mound, the pitch tailed off to the left batter’s box and bounced as it reached the plate, sending Graham spiraling out of the way and the ball bouncing to the backstop.

“Didn’t even make it to the plate,” Mason later Tweeted, lamenting the big moment before adding, “Thanks for having me and the guys @Royals.”

It was appropriate that Mason, set to start at Kansas for the third consecutive season, was positioned in one of the most important defensive spots at The K on Sunday. After all, Mason has become one of the toughest defenders in the Big 12 Conference and often has made slowing down opponents his No. 1 priority.

“It’s very important,” Mason told Royals reporter Joel Goldberg of his defense during an interview on the Royals’ pregame television show. “I take a lot of pride in playing defense. I hate when someone scores on me, kind of take it personal. You just have a lot more fun out there if you can stop the other team from scoring.”

As for how Mason was feeling in the moments just before taking center stage on Sunday, the guard who has led the Jayhawks in assists during each of the last two seasons, admitted to pre-game jitters.

“A little nervous right now,” Mason told Goldberg. “But when I first got to KU I thought I was gonna be nervous for my first game, but I wasn’t.”

In that game, an 80-63 home victory over Louisiana Monroe which Mason started, the true freshman finished with three points and five assists in 18 minutes. He now sits 82 days from playing in the final season opener of his KU career.

KU coach Bill Self said Saturday that his team was expected to arrive back from summer break in its entirety sometime late Sunday afternoon. From there, the Jayhawks will have a team meeting today before getting started with the limited practice time available to players and coaches until the season begins. According to NCAA rules, college coaches are allowed to have two hours of contact with their student-athletes per week out of season.

The Jayhawks will get going for real in October. NCAA rules stipulate that official practices can begin 42 days before a team’s regular-season opener, with 12 days off during that time.

Self said the Jayhawks would forfeit their chance to practice on Sept. 30 and would open the season with Late Night in the Phog on Oct. 1. From there, KU will wait until Wednesday, Oct. 5 to practice again.

“That’ll give us Friday off, Sunday off, Monday off, Tuesday off,” Self said. “So that way we’ve already taken four days off. Last year, it got to the point where we had to take a day off every two days to make sure we got our 12 in. So we’re gonna back it up a bit and maybe not start quite as early.”

Frank Mason's first pitch: "He bounced it, but look at the velo on that one!" @KUHoops #Royals pic.twitter.com/VKVxUfWhJP

https://twitter.com/FSKansasCity/stat... has video of the pitch

The throw wasn't THAT bad. Blame goes to the catcher on that one too...

That wasn't bad. A decent catcher could have caught it.

Sh** happens. I've seen athletes, rappers/musicians, actors, Presidents etc. make the worst throw in their lives when standing on the mound to throw out the first pitch in front of thousands of fans.