Kansas sophomore Kelsie Payne (8) goes up to spike the ball while being challenged by Baylor's Adrien Richburg (20) and Andie Malloy (8) their volleyball match Saturday afternoon at the Horejsi Center.

Texas is ranked No. 2 in the nation in women’s volleyball, Kansas No. 5.

Two of KU’s three losses during a 30-3, 2015 season came to Texas, the national runner-up, the third loss to Nebraska, the national champion.

Both Texas and Kansas are coming off of Final Four appearances and interest in KU’s volleyball team has outgrown the 1,300-capacity Horejsi Center.

Now, close your eyes and picture 16,300 packing Allen Fieldhouse to cheer for the Jayhawks and boo the Longhorns.

Athletic department bean counters would love that, but they would not be the only ones with that sentiment.

“Texas would love to play us at Allen Fieldhouse,” Kansas head coach Ray Bechard said. “They would love that, even if there were 15, 16 thousand because they would say, ‘This is new to us and it’s new to them, even though there are more fans cheering for Kansas.’”

Drawing such a crowd would count as another big moment for volleyball in the middle of the country. Remember, every Final Four contestant, including Minnesota, came from the Central time zone.

“Yes, one of our secondary goals is growing the sport in the region, but obviously one of our primary goals is giving our team the best chance to be competitive at the national level,” Bechard said.

Losing a match at Allen that might have been won at Horejsi would be detrimental to KU’s national ranking, which stands at No. 5, here in the preseason.

At some point, though, playing a big match in the fieldhouse does have a certain appeal to it.

“I would love to play in Allen just to see how much we could fill it up and just to be playing on that floor would be awesome,” All-American junior setter Ainise Havili said. “But I love this gym. It’s really intimate. It gets really loud, throws a lot of people off. And it’s just what we’re used to. There are pros and cons to both.”

Madison Rigdon, who hit the winning shot against USC, called the fans who pack Horejsi “incredible, so nice.”

Senior Tayler Soucie, a first-team All-Big 12 selection last season, played in the fieldhouse in the NCAA tournament as a freshman.

“It’s not going to get as loud as it does in here,” Soucie said. “You’re not going to hear the band as loud in there like you would here. The fans aren’t going to be as close. The closeness and the intimacy that you feel in here, you probably would not feel in Allen Fieldhouse.”

Not everyone who wanted to purchase a season ticket was able to and every seat for every match is sold out. Talk about a tough ticket.

Jim Marchiony, the athletic department supervisor for volleyball, said “very preliminary discussions,” have taken place about the feasibility of expanding Horejsi, but he also pointed out that the minimum capacity to become eligible to serve as host school for an NCAA Regional is 3,000.

It would require a new building and if you’re going to build one that seats 3,000, why not kick it all the way to 4,500? Make it the home court for both volleyball and a women’s basketball team that now plays in front of crowds so small that they give Allen Fieldhouse a cavernous feel. 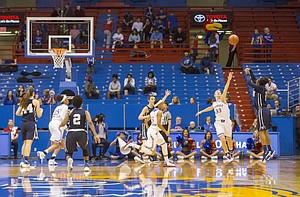 Oral Roberts' Bria Pitts, right, launches a three point try over Kansas freshman guard Kylee Kopatich (33) and the rest of the Jayhawks' defense during their game Tuesday evening at Allen Fieldhouse. Despite taking an eight point lead into the locker room at halftime, the Jayhawks lost their second game in a row, falling to the Golden Eagles, 70-63. The loss drops Kansas' record to 5-6 on the season.

Upon hearing my suggestion, Marchiony’s face took on a look that suggested he just had chugged a quarter of used motor oil.

“I don’t know if you ask the women not to play in Allen Fieldhouse,” Marchiony said.

A more intimate building would make for a better environment.

Marchiony came to Kansas from UConn, a women’s basketball powerhouse that averaged 12,859 for its games in 2002-03, Marchiony’s last year at the school. The Huskies drew an average of 8,920 fans last season.

Still, the fieldhouse was only slightly more than one-third full, not as appealing as a 4,500-building with no empty seats.

If the women’s team does develop into a winner and generates a buzz, Allen Fieldhouse could always remain an option for big games.

At the moment, there are no plans finding a bigger home for volleyball/smaller home for women’s hoops, but I do like the idea.

Allen Fieldhouse is a recruiting tool. Brandon unlike the 2 before him is smart enough to use it.

Tom, fortunately you aren't a facilities planner - just someone trying to create news where there is none....

I think this idea has a ton of merit, personally. Horesj is nothing more than a nice high school gym and the volleyball team deserves something better, regardless of what the women's basketball team does.

I will say that Marchiony is not wrong. When KU made the NIT final a few years ago, the Fieldhouse was full and that was one raucous, fun environment for that team. Bummer they lost the game.

Finish Memorial Stadium first! I understand that volleyball is doing well right now, but they are not a revenue sport and will play next to no role in any future conference realignment talks.

Exactly, this is extremely premature.

when I was at KU late night was at midnight of course and before the basketball stuff at 10 they had a volleyball match each time and admission was can goods. why not do it again. 7pm Match, 830/845 Late night until 11pm bam

Late Night would be fine if the schedule works but don't steal the revenue. Offer tickets to the volleyball match - lower level for Horesji tickets and open seating above. You can stay after for LN or take your chances and come later with the traditional can.

Part of the difference is also the size of the courts. Stands at the edge for BB are not intimate for VB. Could Allen accommodate a VB court sideways? If so you could hang a curtain across behind the scoreboard and get 8,000 seats but guessing there's not enough room.

Either way a 6,000 seat arena sounds pretty good for both. With adjustable seating it could probably even adapt well to both.

A lot of good points have been made. One more thing I would add is that as great as the volleyball team was last year, they haven't had a long history of success. Let's see if they can do it consistently for a little while before we talk about expanding the size of the arena.