Set to enter his 14th season at Kansas, Self still hungry for more

Kansas coach Bill Self yells in the second-half of the Jayhawks 79-63 win over the Maryland Terrapins Thursday, March 24, 2016 in an NCAA Sweet Sixteen matchup at KFC YUM! Center in Louisville, KY.

Asked recently about what drives him after winning a national title in 2008 and 12 consecutive Big 12 regular season titles heading into the 2016-17 season, Kansas coach Bill Self didn’t bat an eye.

“There’s a ton left to play for,” Self said during a recent appearance on KLWN’s Rock Chalk Sports Talk. “I’ve always felt this way. When you are successful or teams are successful, the tendency is you can relax. But in our situation, certainly the more you get, the more you want.”

That blanket statement can cover just about every aspect of Kansas basketball entering Self’s 14th season in charge of the program.

For what it’s worth, given its long-standing relationship with him, KU appears to be in good shape in its pursuit of 7-foot center DeAndre Ayton, ranked by Rivals.com as the top player in the 2017 class.

Regardless of whether you emphasize recruiting, winning or the facilities arms race, KU continues to be ahead of the game in all three realms and actually may be improving in all of them.

“We’re excited where we’re at,” Self said. “We think our facilities are the best that they’ve ever been. They’ve basically become second to no one. And we have a chance to recruit to that now. We haven’t up until this point, so I’m really excited about us hopefully even drawing as good of or a better athlete to help us realize that dream of trying to cut down nets again.”

The Jayhawks are expected to enter the upcoming season ranked in the Top 5 in the preseason polls. With a good mix of returning talent, fresh faces and veteran leaders, reaching that goal certainly figures to be a possibility once again.

“We wanted that national championship very badly in ’08,” Self recalled. “But all that did was make us want another one even more. I hope we’re in the position to play for the highest stakes again, and I hope it’s sooner rather than later.”

Former Jayhawk Xavier Henry, the No. 12 pick in the 2010 NBA Draft who has suffered a number of significant injuries during his short NBA career, was back at it this week, attempting a comeback.

Working at a free agent minicamp in Los Angeles, Henry, 25, talked about his down-and-out journey — an ACL tear, a ruptured Achilles tendon, an injured wrist — that brought him onto the court at the Los Angeles Lakers practice facility looking for another chance.

“It was unbelievably tough,” Henry told NBA.com’s Joey Ramirez. “For two years. It’s depressing. You go through so many emotions. So many: ‘Do I quit? Is it over?’”

Henry answered that question during the past year, first by earning a training camp invite from the Golden State Warriors and then by rehabbing with the Warriors D-League affiliate. Now, he’s looking for more, and Lakers GM Mitch Kupchak believes the former Laker, who averaged 10 points a game in 43 contests in L.A. in 2013-14, can get there.

“We know the kid and we know what kind of heart he has,” Kupchak told NBA.com. “He’s still young enough to make a run at the NBA, so we wish him the best.”

As for Henry, he’s just happy for the opportunity.

“I’m feeling blessed that I can even play basketball again,” he said. “I’m back to where I need to be. I’m just trying to show everybody else that I’m back.”

According to college recruiting blogger Zach Smart, it’s Florida that is the clear front runner for four-star Class of 2018 guard Luguentz Dort.

But the Jayhawks are making a run.

Dort’s prep coach, Shaun Wiseman, recently told Smart that the Kansas basketball coaching staff has stepped up its interest in the shooting guard from Arlington, Florida.

At 6-foot-4, 190 pounds, Dort’s game is all about power. Wiseman calls him “bullish” and added that the development of his jump shot this summer should go a long way toward making him a complete player capable of competing at college basketball’s highest level.

“He’s so strong,” Wiseman told Smart. “He gets to the rim whenever he wants. He gets to the free throw line. He’s just able to manufacture points.”

As of today, Oklahoma, Baylor, Louisville and Oregon appear to be the stiffest competition for the Gators and Jayhawks in pursuit of Dort.

“Every day or two it seems like somebody else is saying, ‘Hey, this the type of kid we want to recruit. This is the caliber of kid we want offer,’” Wiseman said.

You can just tell by the way Self talks in interviews, especially regarding jumping to the NBA, that he feels like he has unfinished business here at KU. And that unfinished business is another NCAA title. Not a Big 12 Championship, but a National Championship. We've had some missed opportunities since 08' most notably in 11' with the twins. Winning championships is hard and the NCAA is a crapshoot most years and I get that. But we're Kansas and we expect Final Fours. Under Self we've been to only two. I'm not saying I want to get rid of him by any means, but I think another Final Four appearance and a National Championship, will cement his legacy in the Hall of Fame.

I agree. With the exception of 2012 I feel like our postseasons have mostly been disappointments since 2008. Especially 2011 when we lost to a team that lost to Butler who played a horrible game in the title game against a UConn team that also played pretty terrible game.

I think this last year we had a good chance although I do think Villanova was a good team and eventually deserving of their title (I just wish we had played them in the championship game or even F4 instead of E8 so we could at least have had another F4 run under our belt).

2014 was also a disappointment. We shouldn't have lost to Stanford even without Embiid and if we could have gotten Embiid back in the S16 (like he later claimed he would have) I think we would have been a contender for sure.

He's a great coach. He competes with Duke, Kentucky and North Carolina, year end and year out without have 200 McDonald's All-Americans on his roster. He's made players like Whithey, the Morris twins, and others. I know he would love to be like Steve Kerr or Brad Stevenson and coach all that talent. I think we have him for at least another 4-5 years and we should get another banner or two

I view Trae Young as a long shot to come to Kansas ......but what i find interesting is he plans to make some visits during football season.......hopefully if he were to visit KU it would be during Midnight at the Phog......the atmosphere and Kansas tradition would be more evident ....not to slight the football program....i would think that Coach Self would love for him to experience that special night....

If and when HCBS wins his second national title and he will, I'll be the first in line to petition the university to modify the name of our historic field house to Allen-Self field house.That would be most appropriate.

I'm guessing that coach Self would be first in line to stop such an idea....

The thing about coaching KU, no arena name, it is the Phog, and your name will not be on the court, something about the name of the inventor of basketball.
You have to settle(?) for filling the trophy case.

How about a bronze statue sitting on the end of the bench from Naismith outside of the Debruce center? Or better yet another bench directly across from the Naismith one would be cool as well. I personally think Self would have to win the next two Big XII titles to surpass the UCLA conference title streak AND win another National Championship before he leaves to have such an honor, but maybe he's already there. 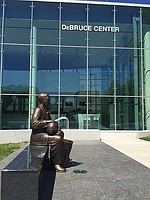 You're probably right Jay and Mallory, he seems self effacing, if that is possible with all the success he has enjoyed, but I would give him the chance to say no.

If/when Self wins his second National Championship, the University will need to find some special way to honor Self. Perhaps Allen-Self Field House would be a good option. Naismith Court will never change. The dorm and major annexes are taken by donors.

I"ve been wondering is a walkway, called The Self Way, from the dorm to the south entrance into AFH might be an option. Perhaps with a Bill Self statue in front of the South Entrance, similar to the Allen East Entrance.

Great coach but I know he wants at least one more NCAA Championship. I'd like to see him on the Olympic coaching staff.

Preferably as the HC.

What a great sentiment, Mick. However, it will always be Phog Allen Field House and James Naismith Court, and I am sure that Coach Self wholeheartedly agrees.

Maybe if he keeps winning consecutive conference championships and another National Championship or two, we can call it the Bill Self Trophy Case. In any event, when he ultimately enters the Hall of Fame, he will have his own legacy that will follow him throughout his life. I'm just proud to call him Coach!

First, I hate negative postings so if this is one, sorry. As a KU grad I will say, we will have another National Championship with Self coming for sure.

When the San Antonio Spurs coach goes, Popovich, Bill is gone to the Spurs! I live in Austin, it is widely known that Bill is very close to their GM.

Prepare youreselves! No way Self finishes his career at Kansas. I offer Jay Wright, Danny Manning or Mark Turgeon as candidates.

I would hate to see him make that choice. He would likely diminish his rep in the NBA.

Manning and Turgeon are good coaches but many better choices exist. It would be interesting to watch. It's been a long time since an elite program hired while at the top.

I'm with Brett McCabe that Aaron Miles will be the choice....OK, no, I'm not.

Jeff, I have no problem with your analysis. You absolutely could be right. Thanks for keeping us in the potential reality.