Each player and coach within the Kansas football program goes to work every day with the common endeavor of leading the Jayhawks out of an era defined by overmatched rosters and losing seasons.

As second-year head coach David Beaty keeps chipping away at that daunting venture, he and his staff try to help players identify optimal plans of attack. Few occurrences on the football field can help accelerate an overhaul more than big plays, and unless you’re talking touchdowns, nothing swings a result quite like a turnover.

So as the Jayhawks plug away through August practices and video reviews, refining plays and trying to jell, they often hear reminders on the importance of protecting the football on offense and creating takeaways on defense.

A year ago, when KU finished 0-12, joining Central Florida as the only Division I program to do so in 2015, the Jayhawks finished tied for 105th nationally in turnover margin — minus-seven on the season. 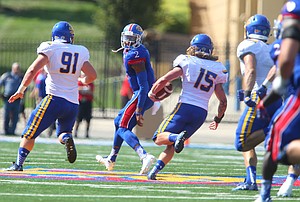 As a way to overcome that deficit and produce more desirable results this fall, Beaty implemented a daily takeaway competition at preseason practices. It’s offense versus defense, and the defenders begin at a disadvantage, with Beaty and his offense at plus-two on the scoreboard when the turnover contest begins. Every time the defense comes up with a fumble recovery or interception, the offense loses a point. KU’s defensive players attempt to put their counterparts in a deficit before the end of practice and the losing side has to run gassers — sprints across the width of the field and back.

“We just have drills at practice where we practice taking the ball away,” Stewart said. “We just do a little circuit and by the time we get on the team event then we’re (prepared).”

On Friday, Beaty pointed out the defense has won the takeaway battle most of the time. Stewart added the secondary is doing its share to make that happen.

“We’ve been getting some interceptions, you know, forcing some fumbles,” the corner said. “I feel like we’re doing pretty well. But you can never have too many. We can always have more.”

According to Kansas sophomore quarterback Ryan Willis, the turnover contest hasn’t been one-sided. 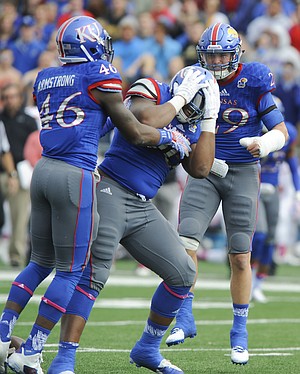 “It switches off daily. It depends on what we’re working on, different installs for the day. I mean, Coach Beaty has really stressed to our team that he wants to win the turnover battle,” Willis said. “He’s just been really hard on us about that, and if we throw a pick or something we’ve got penalties after practice, which aren’t too fun. But he just wants ball security.”

Last season quarterback Montell Cozart threw one interception in his 105 attempts during an injury-shortened campaign. Opposing defenses picked off Willis 10 times out of his 315 passes, the bulk of which came against Big 12 defenses.

Cozart said the takeaway battle has helped both sides during KU practices and the defenders do a nice job of competing for balls in the air.

So far at practices, when Cozart drops back to pass he said the last guys he wants to see breaking toward a ball are Stewart, Smithson and senior corner Marnez Ogletree.

Before every snap, Cozart said Smithson lurks in the secondary, reading the quarterbacks’ eyes.

“You can kind of see it before you take the snap. Fish and I just kind of play cat and mouse games. It’s just great learning from those guys,” Cozart said. “And I feel like our offense is putting great stress on the defense to where they’re getting ready. We run the same type of offense as a whole bunch of teams in the Big 12, so I know our defense is looking forward to it.”

The defense better show some progress this year, or Beaty will be looking for another DC.

In this league an offense that scores 15 ppg. cannot expect much out of its defense when they spend the entire game on the field due to an inept offense. The greatest problem we have at KU is being able to score with the same frequency as our opponents. When we don't our fans want Bowen to shut the other team out so we can be competitive. Give me a break, Doug. You have been on Bowen relentlessly. He is a very good DC and we will make a mistake if we replace him.

Jim is right. Not only was our offense putting the D on the field too much, it was gassing a defense that was (and still is to a lesser extent) severely lacking in depth, both talent-wise and overall numbers. That compounds the problem immensely and means any DC would struggle to do well. I think Bowen is a good, but not great DC, he just needs more bodies to show what he can really do.

No other B12 School was ranked in the Top 50 (for the 2015 season). I'm not saying that the Jayhawks Defense doesn't need to improve. I'm just stating that the League is an Offensive based league (not defensive).

The SEC Conference has 4 schools that ranked in the Top 10 overall. And, Missouri was ranked at #6. So perhaps, you need to lay off of the constant criticism of Coach Bowen. After all, he's stuck with the program longer through thick and thin. He's truly bleeds Crimson & Blue more than a lot of people do.

Do I think that he should be granted lifetime immunity? No, I don't.

But, has he had Top Rate 4 & 5 Star Talent in all of his years of coaching Defensive backfields in his coaching tenure? No, he hasn't.

And, Coach Bowen has been on the coaching staff that has produced players who are currently still playing in the NFL.

I'm sure those guys are not just in the NFL based soley on their athletic abilities (and didn't learn a damn thing while they donned uniforms for the Jayhawks Football Program).

By the way, Texas Tech ranked #126 and K-State ranked #105. Are the Cat-Backers calling for their Defensive Coordinator's head over in Manhattan (as well)?

Getting turnovers would help our chances to win!And not turning the ball over would also help!

The question is how do we improve on our defense from last year!

I agree 100 plus 100 % Jim. -- I don't give a tinkers dam, if you have an offense if that's what you wanna call what we put on the field last year, if that's the best we got - - -then I don't care how good your defense is - -your gonna wear down. Spending 3 out of 4 quarters on the filed isn't cutting it. You got to be able to move the ball and score - -way to many 2 yds and a cloud of dust -- -to many 3 and outs. We just have to get better O-Line play to be able to protect Our QB's to have time to move the ball, you can't expect a lot when the QB is spending 3/4 of his time running for his life.

Which in turn falls on what Doug calls our pathetic Defense - -pathetic offense leads to pathetic defense . Agree Bowen if a good DC hey can't control the offensive side of the ball. - - I don't care who's defense you have Flordia st, Oklahoma, Ohio State - -if your offense isn't squat - - good luck with the defense. the answer IS NOT replacing Bowen -- the answer is having better OFFENSIVE ball control, scoring output. - - ROCK CHALK ALL DAY LONG BABY

Wrong again! Defense can't tackle, can't cover, and the Defensive Plan is so bad an intelligent fifth grader could beat it.

Example: Our terrific LB a couple of years ago , being our last chance, was picking himself up off the field, while the TCU runner was celebrating in the end Zone. He threw his body at the runners feet and didn't make the tackle. If any of you pay attention, the odds are you will lose out on the tackle 2 times out of three, varying up as low as one out of three. If you know how to tackle, you will win 9 times out of 10. So one of the rules about tackling is "Don't EVER throw your body at his feet"! You have to watch his belt buckle, it will tell you where the runner will be in 2-3 steps. Hesitate and adjust your route so you will be in his place when he gets there. Hit him in the legs, hard, and 'wrap him up', meaning you lock your hands behind him, either locking hands or clasping your own wrists, and squeeze like hell! At that point the runner isn't going anywhere!

If you ever watch the pro's you will find very few of the players are taught to tackle!

There is nothing wrong if your defense spends 90% of its time on the field PROVIDED they are taught enough about DEFENSE to put their offense on the bench again with 3 and out! We haven't played defense for 5 YEARS! The other point should be that the DEFENSE scores more points than their offense. On that point Beaty is on the right track.

A lot of you guys are proud of your years as KU fans. Many 60 or more years. Did you learn anything about the game? 71 years ago I enrolled as a KU freshman. Didn't learn any all at once, but if you pay any attention it will come to you. Many are asking us to buy tickets. Went to Weis first 4 games. He didn't understand Defense, and he knew NOTHING about teaching 18-20 year olds how to play the game. After those 4 games, there was really nothing to watch on TV. To win a few fans back, get a DC, probably from Ore, Mich St, Oh St. It would be fun to watch improvement in Defense! After all, it's Defense that wins games!