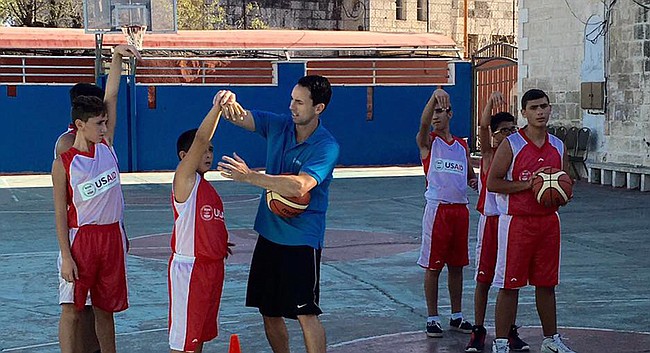 Former Kansas Guard Brett Ballard, center, instructs young players in late July as part of the PeacePlayers International initiative in Israel. Ballard, who is an assistant coach at Wake Forest, spent a week helping at coaching clinics in the region.

The lives of college basketball coaches are often intense but can become downright crazy when their chosen profession takes them halfway around the globe.

That was the story for former Kansas guard Brett Ballard during the final week of July.

Ballard, a third-year assistant coach for Danny Manning at Wake Forest, recently returned from a six-day trip to Israel, where he soaked up the local culture and delivered some of the finer points of American basketball to young Israelis and their coaches.

Ballard, who played at KU from 2001-02 and also spent time working on Bill Self’s coaching staff as video coordinator and director of operations, went as part of the PeacePlayers International initiative, which lists its mission as “uniting communities in conflict through sport.”

San Antonio Spurs general manager — and friend of the Kansas basketball program — R.C. Buford has been heavily involved with the organization, and it was that connection, along with Ballard’s impact on a former Israeli athlete whom he coached while leading the Baker University hoops program, that led to Ballard packing his bags and heading overseas.

With the ongoing conflict in Israel, Ballard said the goal of the organization was to take Jewish Israeli athletes and pair them with Muslim Arab athletes on the same teams.

“Obviously it’s not easy to make that happen,” Ballard said. “But they do it to try to promote peace. It’s really pretty cool what they do.”

Ballard’s specific role during his week in the region was to speak at three different coaching clinics, one in the Palestinian territories and two more in Tel Aviv. As is the case in many other cultures, the athletes and coaches there went nuts for everything Ballard taught them about the game and how it is played, coached and even celebrated in the United States.

“Truly the most memorable thing was how the coaches, after each of the clinics, were just so appreciative of me coming over there and teaching them a little about what American basketball’s all about,” said Ballard, who noted that the locals went wild any time he referenced NBA stars Steph Curry or LeBron James. “It was very obvious that American basketball over there really can have an impact.”

While at Baker, Ballard coached Samer Jassar, of Jatt, Israel. Ballard said that experience and his time walking the streets and working in the gyms in Jassar’s native land made it clear that the game invented by James Naismith truly has become a global phenomenon. Ballard also noted that the success enjoyed by former Cleveland Cavaliers coach David Blatt, who lived and coached in Israel, brought an even stronger NBA connection to the area.

Outside of basketball, Ballard said touring the Old City and seeing various sites throughout Jerusalem and Palestine was unlike anything he had ever experienced.

I'm sure bouncing a ball is all it will take to stop Muslims from fulfilling the mandate of their political system that those in disagreement with it be killed....

Two issues that may be a problem for Brett to overcome with these guys: Alternate possession time/shot clock violation/"over and back" violation. Flagrant fouls.

Hey! It is good to see one of our people is helping out. Congrats and best wishes to him. It is kind of a shame we couldn't help out many years ago -- when maybe it might have been easier to get every one on the same page.

Jimmy Carter, Anwar Sadat and Menachem Begin. And now Brett Ballard! Maybe they need to go down into one of the tunnels that were built to launch sneak attacks on Israel to practice basketball.

Like 1400 years ago? When Umar and Muhammad came up with their sceme to justify killing, looting and taking sex slaves? How many millions of lives would that have saved?

Josh Selby, Julian Wright and Keith Langford have all played pro ball in Israel. None of them are there currently, but I hope the Jayhawk isn't totally foreign to the folks of that land.