First, they broke it down by conference, seeking initially to identify the toughest arena in each of the top 10 conferences.

To no one’s surprise, Kansas’ Allen Fieldhouse ran away with the Big 12 crown, earning 50 percent of the vote, the highest percentage of any of the winners.

Now it’s on to the next round, where ESPN is asking the nation to decide which of those 10 arenas is the toughest.

No timeline was given for the poll, which is currently live on ESPN’s college basketball page.

The second leg of the SEC-Big 12 Challenge that will pit blueblood powerhouses Kansas and Kentucky against each other for the second consecutive season officially has a time and a network.

Kansas, which knocked off Kentucky in overtime at Allen Fieldhouse in the challenge last season, will travel to Lexington, Kentucky, for a 5 p.m. tipoff, Jan. 28 in the Wildcats’ home gym. The game will be televised by ESPN.

Other match-ups in this year’s SEC-Big 12 challenge include: West Virginia vs. Texas A&M, Oklahoma vs. Florida, Kansas State vs. Tennessee, Texas Tech vs. LSU, Iowa State at Vanderbilt, Oklahoma State vs. Arkansas, Baylor at Mississippi and TCU vs. Auburn.

The Big 12 owns a 20-10 advantage in the head-to-head challenge with the SEC and has won the showdown in each of the first three years.

What date is the KU-UK game?

What time is the KU-UK game?

Mizzoo, MSU, USC, 'Bama are the SEC non-participants. So we're 2-1 winners, and they sit out their worst teams, or has 'Bama become respectable in BB? You'd think they'd have some $ to throw that way.

Missouri is the only garbage team sitting out. The ither 3 were mid pack I believe. SoCar was one of the last 4 out last year I think.

Did they do an additional write-up on AFH? The Big12 specific question was so obvious they almost brushed it aside. Sort of like the second half of our FB games against BU or a few of the others when the announcers start talking about the weather, their favorite sitcom, or something else completely unrelated.

Been to both AFH and Cameron. Granted the game at Duke (2015 Championship team) was a non-conference game and a match up between highly-ranked Duke and Carolina teams would undoubtedly rival any venue in America, but the overall atmosphere between the two is incomparable. I've been to dozens of KU home non-con games and it still gets electric when the team gets on a roll. It's hard to tell on TV just how small their gym is, too. I tried with the panoramic picture that I took from our seats below. The skinny hallways in Cameron makes it seem as if you are in a crowded school building during a class change and the concession lines stretch the width of the corridors. The students are loud and I like the concept of having them along the baselines and running the length of the floor, but it's nothing compared to the excitement that you get night in and night out in Allen. If you're ever on Tobacco Road I would recommend attempting to get a ticket to a Duke game (good luck) or even a game at the Dean Dome, but I promise you will leave there happy that you are a KU fan and get to experience truly the greatest home court advantage there is in Lawrence. 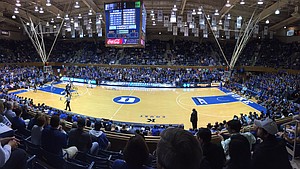 Agreed, Mick. He certainly didn't vote like a "homer".