Like many others, Self eager to see Svi take next step 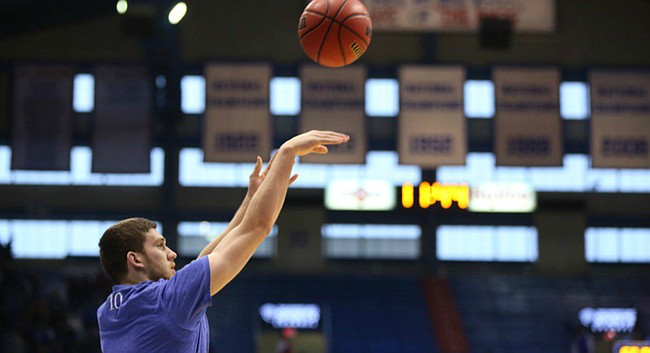 A year ago, most members of the Kansas men’s basketball team had an opportunity to get a jump on the 2015-16 season by competing internationally, in the World University Games in South Korea.

This summer, one of the players who was forced to stay home got his turn.

Junior-to-be Sviatoslav Mykhailiuk spent a good chunk of this summer away from his Kansas teammates preparing for and playing with his countrymen in the Under 20 European Championships in Finland.

Mykhailiuk, who led his Ukrainian team with a 14.9-point average in seven games — and also averaged 5.6 rebounds, 2.7 assists, 2.1 steals and 4.7 turnovers — remains one of the most intriguing returning players on KU’s roster despite his somewhat limited participation during his first two seasons in Lawrence. During his freshman and sophomore seasons, Svi played in 61 of a possible 74 contests and averaged 12.1 minutes per game.

KU coach Bill Self said last week on Rock Chalk Sports Talk that Svi was expected to return to campus in late August (likely the 18th or 19th) and, like many fans, the KU coach admitted he was curious to see if this would be a breakthrough season for the still-young Ukrainian.

“I’d love to see if Svi can play to what so many people thought of him when he came in here,” Self said.

As for how the summer went for the Jayhawks who remained stateside, Self seemed pleased with the way his veteran group carried its momentum from a strong finish in 2015-16 into June and July.

“It’s been a pretty non-eventful summer, which those are the best kind,” Self said. “It’s been good. I think we’ve gotten better, I think our guys have gotten stronger. ... I do think our guys like each other. Of course, it’s early, so everybody probably likes each other in the summer time. But they’ve had a good summer and we got quite a bit accomplished and I think they’re excited to really get to work when school rolls around.”

Sexton receives top honor: Rivals.com on Wednesday released its all-summer team and KU target Collin Sexton, a five-star, 6-foot-1 combo guard from Mableton, Georgia, earned Rivals’ Player of the Summer honor. Sexton, who last month trimmed his final 10 to Alabama, Arizona, Florida, Georgia Tech, Iowa State, Kansas, North Carolina, N.C. State, Oklahoma State and Villanova, is ranked as the No. 12 player in the 2017 class and has plans to cut that list in half this month. In fact, he told Rivals.com’s Eric Bossi that he hopes to make a decision before the start of his senior season at Pebblebrook High.

Weatherspoon Tweet: Earlier this week, four-star shooting guard Nick Weatherspoon, of Camden, Mississippi, announced via Twitter that he had received an offer from Kansas. Weatherspoon, who also landed on Rivals.com’s all-summer team, is a 6-1 guard from Velma Jackson High and is ranked 32nd in the 2017 class. KU targets DeAndre Ayton (No. 1) and Trae Young (14) joined Sexton and Weatherspoon on the all-summer squad.

Svi has the potential to be one of KU's biggest factors this year given his size, maturity, and ability to play multiple positions. Hope he has a breakout year, even if that means he leaves after his junior season.

His age and experience might catch up to his ability this year. RCJH