“If you want to get on the varsity, the best way to make that happen is by playing defense,” Watts told him.

It worked, and Garrett quickly found himself playing with the top team at Dallas’ Skyline High. Fast-forward three years and the 6-foot-5 versatile guard, who orally committed to Kansas on Monday night, is still in that same gym, digging his feet in, dropping his butt and staring opponents straight in the face. 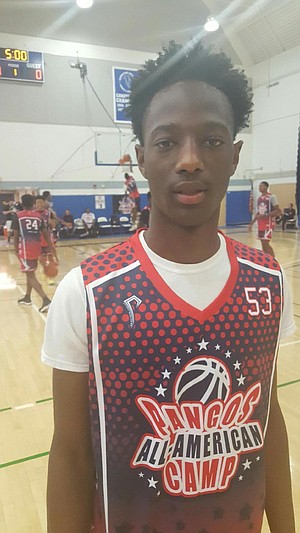 According to Watts, who called his nephew “a bulldog on defense,” that willingness to give up the limelight in order to play elite-level defense has long been a staple of Garrett’s game.

“That’s always separated him,” Watts said. “It’s very rare in this day and age, when kids are getting so much exposure off of how many points they score. You very seldom see young men want to take that challenge of guarding and risk getting embarrassed by these talented offensive players.”

Not Garrett. Night in and night out, no matter who was wearing the opposing team’s jersey, the 44th-ranked player in the Class of 2017 according to Rivals.com has known two things. One, he was going to guard the other team’s top player. And, two, he was going to do it well.

“Playing hard, defending and being a good teammate, being unselfish,” said Garrett when asked what was most important to him on the basketball court. “But I had already taken pride in defense since I was younger. He just told me that freshmen were going to have to do more to make the varsity so I did what he said — play D and pass to the open man.”

According to Watts, who said doctors told the family that Garrett could top out as tall as 6-8, the mature qualities that accompany Garrett’s game were what first put him on the radar of so many college coaches.

“For him, it’s always been about the team,” Watts said. “It’s never been about him. He doesn’t want the spotlight. He’s a pretty quiet kid for the most part.”

Officially, Garrett picked Kansas over offers from Baylor, Connecticut, Iowa State, K-State, Oklahoma State and Texas, among others. But, in reality, there really was not much of a decision to make. For starters, Watts and Garrett both believed that KU coach Bill Self’s system — three guards on the floor at all times — would be a terrific fit. And beyond that, their familiarity with Kansas — “We’re in that market where Kansas is always on TV,” Watts said. — brought a certain level of comfort to the whole process.

Monday night, 4-star Dallas guard Marcus Garrett, of Skyline High, became the first player in the Class of 2017 to orally commit to the Kansas basketball program. The 6-foot-5 Garrett is ranked 44th in the country, according to Rivals.com.

“I just wanted to pick a school that I knew I could fit in with,” Garrett said. “At first, I was gonna cut it to five. But then I just decided, if I already knew where I wanted to go, why not just commit?”

Given the bloodlines they share, Watts said Garrett’s commitment was one of the more enjoyable he could remember celebrating.

“It’s extra special,” Watts said. “I just remember seeing him as a young boy growing up, always dribbling the ball wherever we went. ... It was a process. And I think the best thing about it is, a lot of kids don’t fall in love with the process of growing. They want it right off the bat. But it wasn’t that way for Marcus. And I thought he handled the whole thing excellent.”

Gak down to five: Four-star power forward Deng Gak, a 6-foot-9, 210-pound senior at Blair Academy in Blairstown, N.J., recently narrowed his list down to five schools, with Kansas making the cut. Joining KU on Gak’s final five are: Duke, Indiana, Florida and Miami. Gak is ranked as the No. 78 prospect in the Class of 2017 according to Rivals.com.

Visits coming: Troy Brown, the 10th ranked player in the Class of 2017, recently narrowed his list to eight. But that list is going to have to shrink by at least a few more in the near future and Brown knows it. According to Eric Bossi of Rivals.com, Brown is in the process of determining which five schools he will officially visit. Brown, a five-star, 6-foot-6, 195-pound guard from Las Vegas’ Centennial High, trimmed his list to Alabama, Arizona, Cal, Georgetown, Kansas, Oregon, Ohio State and UNLV. He already has confirmed to Rivals that he will attend KU’s Late Night in the Phog on Oct. 1.

New name for Kemper Arena: Mosaic Arena will be the new name of Kansas City’s Kemper Arena, site of the 1988 Final Four where Danny Manning and the Jayhawks hoisted the trophy on KU’s first national title since 1952. The new name, announced Tuesday in a news release, is part of an agreement with Foutch Brothers, the development company that plans to turn the arena in the West Bottoms into a regional amateur sports venue. The deal, with Mosaic Life Care, makes Mosaic the naming rights sponsor for the arena.

Mosaic Life Care is a health care company based in St. Joseph, Mo., that is expanding its services into the Kansas City metro area. CEO Mark Laney said in a release that he believed taking over the naming rights for Kemper Arena would help the company expand its brand. But for fans of KU basketball the move likely will be remembered as little more than the reason that one of the most important venues not named Allen Fieldhouse in Kansas basketball history now goes by a new name.

Since I know nothing about Garrett, it's great to hear about his commitment to play defense and team ball. However, after watching couple of clips posted by Keegan, it appeared to me he still has a lot of work to do with his defensive skills before he can expect to start for Bill Self. I suppose you can say that about any HS player but he seemed to have had some difficulties keeping TJ Starks and Andrew Jones in front of him.

He does has nice offensive skills, being able to get to the rim and finish as well as the ability to hit deep balls.

The differences are yet to be seen except for the obvious one, one is listed as a shooting guard, one as a point guard, but size and devotion to defense seem to be the same. Travis Releford was only the #70 recruit in the nation, but had a solid career at KU. Travis was listed by Rivals at 6'5" and 190 coming out of HS, 10 lbs. heavier but the same height. Travis was lost on the court as a freshman, a leader as a 5th year senior. RCJH

Just got back from two weeks in Hawaii and I am trying to catch up.

Is it safe to assume that, based on conference graduations, NBA exits and returning letter men, KU's trip to #13 could be the easiest in years while, subsequently,the trip to a NCAA record #14, could be one of the hardest?

Losing Mason, Lucas, Self, Jackson, Svi, Graham, Bragg, that's two thirds of your nine man rotation plus a fifth year senior.Certainly Newman and Garret will help but #14 looks like a big challenge with a bunch of freshmen seeing big time PT.

How many times has Coach Self replaced most of the relevant parts and still won?

It will be a challenge, rivaling the 2008-09 team. After the NC tons were lost, but the Coach Self/KU train rolled on.

I don't think Svi leaves early. He really underwhelmed at the Euro U20's this summer and hasn't developed as expected at KU.

There seems to be a lot of variation on where he is listed. Some have him listed in the first round as you imply and others have him waiting until 2018 and still being late in the second round.

Like the post-2008 reference by Steve. Our lead returners for 2009 were Sherron Collins and Cole Aldrich, and Aldrich didn't have a great freshman year until his breakout game against UNC in the national semi-finals. His work on Tyler Hansbrough was outstanding. Then, of course, he blossomed in 2009.

Coach Self and his staff may have done their best job that year even though we ended up with a #3 seed in the NCAA and lost to Michigan State in the Sweet 16 in a game that we easily could, or should, have won.

Anyway, like Steve and Jay, I really appreciate the way that KU keeps winning no matter how many parts have to be replaced from year to year. We are indeed blessed to have such a quality program.