Kansas junior Marcus Wheeler reacts as he heads back to the dugout after striking out during the National College Baseball Hall of Fame Game against Nebraska Wednesday evening at Kauffman Stadium, in Kansas City, Mo. The Jayhawks fell to the Cornhuskers, 3-1.

Kansas City, Mo. — Chants of “Goooo Biggg Redddd” filled Kauffman Stadium on Wednesday night, marking the first time in five years the Kansas University baseball team had been forced to deal with the famous rallying cry of the Nebraska Cornhuskers.

Renewing their former Big 12 rivalry for one night at the home of the world champion Kansas City Royals, the Jayhawks and Huskers waged a defensive showdown in front of a crowd of 2,368 fans and combined for just 11 hits in a 3-1 Nebraska victory. 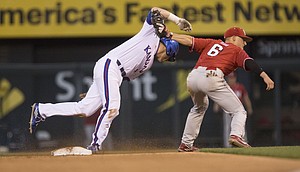 It would have, and certainly could have, been much worse for the Jayhawks had they not showed up defensively.

Nebraska left 11 runners on base — KU stranded five — and nearly blew the game open in the top of the second when shortstop Steven Reveles smacked a ball up the middle to the second-base side of the bag. There to field it was KU senior Colby Wright, who finished 1-for-3 at the plate and turned in a pair of web gems, including the huge stop in the second inning on Reveles’ ground ball.

After smothering the ball with his glove, Wright did not have time to make the exchange to his throwing hand and instead flipped the ball from the glove to shortstop Matt McLaughlin, who bare-handed the flip out of mid-air and fired to first to complete the double play.

“The double play with the bases loaded was one of the most spectacular double plays of the year,” KU coach Ritch Price said. “It saved two runs and, who knows, they might’ve scored five, and that would’ve opened up the game. That’s one of the best double plays you’re ever gonna see turned, even in the big leagues. We played really well defensively tonight. To hold ’em to three runs is as good as we could’ve hoped for.”

Starting pitcher Hayden Edwards was responsible for at least part of that. And the Kansas City native, who was drafted by the Royals out of high school, said getting the start at The K was a dream come true.

Edwards found out he would start Wednesday’s game a little less than 24 hours before the first pitch. He said he had an inkling that things were headed that way but did not know for sure until Tuesday.

That, he said, allowed him to keep his nerves in check, and he responded by striking out the side in the first inning.

“I couldn’t ask for better than that,” Edwards said. “There’s nothing really (better) than getting to pitch at one of the nicest ballparks in America for the team you grew up watching.”

Price, 4-1 all-time as the KU head coach at Kauffman Stadium, said he handed the ball to Edwards hoping to tap into some success from the past.

“That’s the reason he got (the start),” Price joked. “We were 4-0 against Missouri here, and all four times we started a Kansas City guy. It worked before, but it didn’t work tonight.”

In the standings, the loss really meant nothing. KU, which remains in a fight for its life in the Big 12, will return home for a weekend series with Oklahoma, and Nebraska, now in the Big Ten, will move on to play Rutgers.

That fact made it even easier for the Jayhawks to fully soak up the experience and enjoy everything the day had to offer, which started with lunch and a tour of the facilities and included a pregame visit from Royals general manager Dayton Moore.

“I’ve always been a big fan of the big stage, lights on, everyone’s in the crowd. I was fired up to play,” said McLaughlin, who led KU with a 2-for-4 showing at the plate.

Added Wright: “Any time you get to play in a major-league stadium, it’s a blessing, and you just gotta be thankful you were able to do it. But especially now that they’re defending champs and you get to go around the bases and see the bases that say World Series champs and get to see a couple of the rings. It was a really fun experience and a great day.”

For all of the players in a Kansas uniform, Wednesday night marked the first time experiencing something like this. That was what made it special for Price. But even he could not hide his excitement over returning to the big stage.