Kansas head football coach David Beaty and Je'Ney Jackson, director of strength and conditioning have a laugh as the team waits under the Memorial Stadium stands as a lightning storm passes during spring practice on Tuesday, March 24, 2015.

One of the most popular statements uttered by Kansas University fans during the past several struggle-filled football seasons sounds something like this: Don’t just tell me they’re improving. Tell me how and show me.

Last week, on the heels of his second spring in charge of the program, KU coach David Beaty obliged.

Talking with reporters on the annual post-spring Big 12 football coaches teleconference, Beaty went into great detail about one of the areas he believes his team has improved the most since last season — strength.

“When you have a team like ours that’s a development team, you’ve gotta see development. And some of the numbers our strength staff was able to provide was something you want to see.”

Since his arrival in Lawrence, Beaty has spoken highly of strength-and-conditioning director Je’Ney Jackson, a former KU cornerbacks coach who handled the strength staff for Indiana basketball before returning to Kansas.

Jackson was one of Beaty’s first hires after being named KU’s head coach, and the weight-room results that Jackson and his assistants have pulled out of this young Kansas team are proof of why Beaty moved fast to land him.

But the results go far beyond numbers on a board, stopwatch or scale. In addition to looking and playing faster and stronger, Beaty said his young squad approached the offseason and spring ball with a confidence that was not present during Year One.

“We had none,” Beaty said. “Coming into last year, we had three guys that had started a Big 12 game, and that experience is something that I think has been drawn on. ... You see added depth that you didn’t have before because those guys have developed, and they’ve gotten to a point where they can contribute. You see the value of what experience leads to, just knowing what to do, where to go, how to do it.

“The production in the offseason has been something I’ve been very proud of.”

Combine these new developments with the one element Beaty said he was most proud of last year — attitude — and it’s easy to see why the coaching staff says the difference between this point now versus this point a year ago is “night and day.”

“I think the one thing (we accomplished last season) was just the way they practiced, their attitude and approach every day,” Beaty said. “Regardless of the outcome, those guys came to work.”

Today, the work continues. And, with spring football now behind them and the Sept. 3 season opener 131 days away, the progress the Jayhawks make during summer workouts and preseason camp in August will go a long way toward determining whether it’s improvement or more of the same that lies ahead.

Coach-thank you for taking the time to rebuild this program. Sorry you had to endure a winless season but looking back at what you inherited, its not surprising. As a 32 year alum of the school, its great when the football and basketball programs are running on all cylinders like in the 90's with Roy and Glen and then in the 2000's with Bill and Mark. I for one support your rebuilding from the foundation up as I know this will sustain the program for years rather than throwing money at a quick fix that clearly devastated the program. I will make the trip from Florida to Memphis to watch that game and will bring one of my 3 sons-we went to the Duke game and had a great time even though we witnessed a blow out loss. We all need to support this team and show the players that we care about all their hard work. Coach, I hope to shake your hand at that game in Memphis to show I appreciate all your hard work-RCJH GoKU! 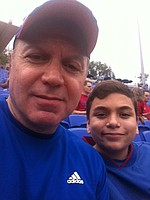 The numbers are impressive, and it appears Jackson is doing what he's been hired to do.

How does this play out on the field? That's anyone's guess but what the numbers do seem to suggest is that we'll have more playable depth this year, which should help competition at practice and gameplay during the season.

If you are a kid who has gone through one of these physical transformations, your confidence has to be sky-high as you enter the summer workouts designed to put that extra layer of strength and agility on before practice starts.

We upgraded our season tickets this year, and I'm really looking forward to a little better view of a better team!

Like the optimism, though it would be wise to temper that with the realization that we'll still have fewer than 70 scholarship players and be young on top of it. We're still likely a year or two away from being respectable, though it is good to see the foundation being built.

Any progress in any area with this team is progress.

No where to go but up!

Hoping for more upgrades little by little by Coach Beaty.Just hang in there things will get better soon!