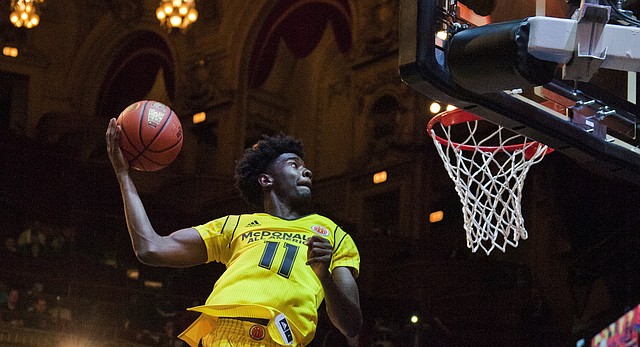 Detroit native Josh Jackson could have asked Prolific Prep founder Jeremy Russotti to take him to see Calistoga’s Old Faithful Geyser, tour a vineyard, go bike-riding on a mountain trail or even walk on the Boardwalk on his first day in Napa, Calif., two summers ago.

Instead, the country’s top-rated high school basketball player, who on Monday committed to play hoops at Kansas University, immediately forgot about entertaining himself and asked if he could join his future teammates in a relief effort in the northern California town.

“I picked him up at the airport, right when the Eagle landed. Literally that same morning we had an earthquake centered in Napa,” Russotti said. “Downtown Napa was in a state of emergency. Our team met at a church that had been turned into an emergency-relief center.

“Josh just got off the plane, just got back into the country after playing for USA Basketball, and our players were helping clean up a house that literally got split in half.

“Josh said, ‘Give me a hardhat. Let’s go help.’ Here you have the No. 1 player in the country spend his first two, three hours in Napa helping clean up a house. There were a lot of important community members saw that and were so impressed,” Russotti added.

Jackson — who had yet to convert his first bucket for Prolific Prep, where he averaged 26.9 points, 13.1 rebounds and 6.3 assists his senior season in solidifying his status as the country’s top recruit — made Russotti smile again a week later.

“One night I kept getting texts (with) people saying, ‘Josh is the greatest kid ever.’ I said, ‘OK,’’’ Russotti said.

“Finally I get a picture texted to me, and it’s the mascot from the football game (at Justin-Siena High, where Jackson and other Prolific Prep players take classes). It was the first game of the school year, and somebody said, ‘Josh is in the (Braves) mascot uniform, and he’s going crazy, high-fiving all the parents and the kids.’ He was the mascot.

“That was his way of fitting in and being a normal kid, showing people, ‘I’m no different than you.’ It was cool for him to own the hearts of families and communities,” Russotti added.

A valuable member of the Napa community, Jackson, of course, will leave known most for his exploits on the court. After helping Prolific Prep to a 30-7 record, he recently earned co-MVP honors at the McDonald’s All-America game, then improved his career record with USA Basketball to 20-0 by playing on the winning U.S. team at the Nike Hoop Summit.

“The thing about basketball I love is winning,” Jackson said on an official Grind Session video released after his commitment to KU. His team competed in several Grind Session tournaments this past season involving the country’s top prep school players. “It’s my favorite thing. I hate to lose. I want to be remembered for winning.

“The second thing I love is just getting better at the game,” Jackson added.

There is just one aspect of Jackson’s game that analysts say he must work on — his jump shot. Jackson’s Prolific Prep coach, Billy McKnight, who praised Jackson’s desire, his lockdown defense, athleticism and ability to take the ball to the basket, addressed the shooting issue.

“He wins a lot of our shooting contests at practice,” McKnight said. “His consistency is something he needs to work on. He has confidence in his shot. He made some big shots for us through the year, including the game winner against Huntington Prep.

“We had to throw a baseball pass (with) 1.2 seconds left, down one or two. Josh caught the ball at the top of the key and hit a shot at the buzzer to win it for us. He is not afraid of taking the big shot.

“People point that out because the rest of his game is so good. They are looking for something he needs to work on. Everybody needs to improve, even Steph Curry, right?” McKnight added with a laugh.

Jackson seems to think so, carrying a strict work ethic to the gym.

“The thing that gets me up all the time even when I am tired is my dream,” Jackson said. “I really want to be one of the best players to ever play.”

McKnight said he has tried and finally come up with a player Jackson just might resemble a bit.

“I was coaching at the University of Oregon. It was when Luke Jackson was a senior and first-team All-American. Andre Iguodala guarded him in Tucson and shut him (Luke Jackson) down,” McKnight said.

“I think of Josh’s body type and ability to do different things and that name comes in my head,” McKnight added of Iguodala. “Andre ... his length, explosiveness, competitiveness, smarts ... Josh has everything Andre has. I think Josh’s goals are to be one of the best players of all time, which would put him ahead of that (Iguodala). That is his baseline, not a bad baseline to have,” McKnight added.

Jackson — it has been well documented — has become so solid in all aspects of his game thanks to his mom, Apples Jones, who played at Allen County CC in Kansas and UTEP and also worked in the Navy. She has monitored his basketball progress closely, while also trusting coaches such as McKnight and others on the AAU circuit.

“The person who inspires me the most is definitely my mom, hands down,” Jackson said. “She is a strong woman, tough, pushes me to be better every day.”

She reportedly wants to be with Jackson when they sign his letter of intent in the near future and ultimately fax it to KU. At that time, KU coach Bill Self will join folks like McKnight in singing Jackson’s praises publicly.

Rest assured, KU is getting a solid person as well as player, his Prolific Prep coach promises.

“He is a great guy off the court. The kids around Lawrence will love meeting him and spending time with him,” McKnight said. “He’s really a well-mannered kid. He signs autographs for an hour after games. He is a baby-magnet, loves to pick up small kids and give ’em a hug. He has a good heart. His mom did a tremendous job raising him.”

His stay in Lawrence will not be long, with the NBA beckoning.

“If I didn’t give him a high recommendation (as NBA talent) I’d have to get my head examined,” McKnight said. “How soon that is ... a lot of factors go into that. He has the ability to play at that level, for sure.”