Kansas linebacker Cameron Rosser (59) chases Rutgers running back Josh Hicks (8), who heads up the sideline for a long gain to set up a touchdown for the Scarlet Knights during the second quarter on Saturday, Sept. 26, 2015 at High Point Solutions Stadium in Piscataway, New Jersey.

“We met our goal for the week,” Wilson said. “Our goal was to win the game.”

Then Wilson stated the obvious: “It wasn’t pretty.”

Neither team played a particularly clean football game, but Rutgers was decidedly better than Kansas in one area: Running the football.

Four different Rutgers running backs averaged 5.4 yards per carry or better and two rushed for more than 100 yards apiece on a day the Scarlet Knights rushed for 312 yards and two touchdowns. 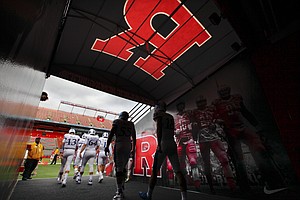 Kansas, which ran the ball well in the first two weeks of the season, with Ke’aun Kinner eclipsing the 100-yard mark in the first two games of his career, had trouble opening holes Saturday. Kinner, who caught three passes for 49 yards, had 23 rushing yards and two touchdowns on 15 carries. De’Andre Mann had a 41-yard run but finished with 40 yards on five carries.

Asked what it meant for him as the running backs coach to amass 312 yards rushing, Wilson answered: “See the fumble, when (Josh) Hicks put the ball on the ground? It’s tough to play in my room.”

The Scarlet Knights stopped the run as well as they used it. 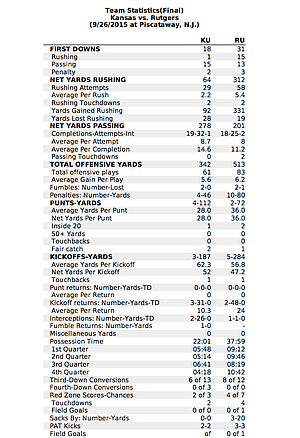 “That’s a good day’s work against anyone,” Wilson said.

Perine from OU is going to go for 500 on KU's defense if he gets to play deep enough into the game.

And Joe Mixon will rack up another 500 yards.