Kansas wide receiver Tre' Parmalee (11) eyes the end zone as he heads in for a touchdown during the second quarter on Saturday, Sept. 5, 2015 at Memorial Stadium.

Saturday’s 41-38 loss by the Kansas University football team to FCS foe South Dakota State left a bitter and disappointed taste in the mouths of the Jayhawks.

But not solely because of the final score.

In addition to being head coach David Beaty’s first game in charge of the Jayhawks and the Kansas debut for 22 players, Saturday’s game also featured the revealing of KU’s new Air Raid offense.

While there were plenty of signs the offense performed well — 576 total yards; most points in a game since October 2011; four scoring drives of four minutes or less — the players and coaches left Memorial Stadium hungry for more.

“We can move faster,” said junior running back Ke’aun Kinner, who ripped off 157 yards and two TDs in his first game as a Jayhawk. “If we do it in practice, we can do it in the game.” 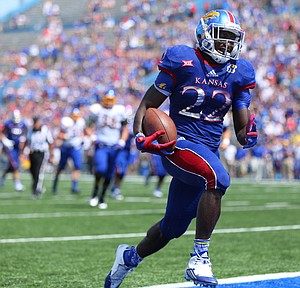 From Day One of spring practices in April, the Jayhawks’ emphasis during the offseason and transition to Beaty — in addition to things like effort, enthusiasm and earning everything they got — was on playing fast.

Offensive coordinator Rob Likens marveled after his first practice with the Jayhawks about the team’s ability to get to 90 snaps in a new system. And Saturday, during Likens’ first game as an OC since 2009, the Jayhawks ran 90 plays — 50 runs and 40 passes.

While the number was good, the efficiency, production and consistency within those 90 plays remained a work in progress.

“Utilizing the tempo is something you gotta do,” Beaty said. “But you’ve gotta use it. If (the defense is) standing up, you need to snap the ball while they’re standing up.”

Added senior Tre’ Parmalee, who impacted Saturday’s game as a receiver, runner and return man: “I think that wears defenses down, and we started to see it. We moved the ball faster, and we saw it in their faces and in their demeanor. They got tired, and we just kept putting the pedal to the metal. That’s when we were at our best.”

Beaty, like many of his players, said he believed the offense would improve in that area as the season moved along. But, for a first game, he seemed pleased with the pace.

“I think they liked that we were aggressive on most downs,” Beaty said of his players. “And (quarterback) Montell (Cozart) did a great job of managing it. I wanted him to be sure about what he was seeing.”

Cozart was. In addition to completing 66 percent of his throws and averaging 5.5 yards per carry as a rusher, the junior QB who now has started games in three consecutive seasons, looked and said he felt more comfortable making decisions, many of which helped KU’s offense operate at a rapid pace.

“Being able to use our tempo against those guys put us in good situations and manageable downs where we could move the ball,” Cozart said. “We scored 21 straight, and that lets you know that we’re deadly. That was a great sign for us.”

KU’s Week Two opponent — the Memphis Tigers, who will visit Lawrence for a 6 p.m. kickoff Saturday at Memorial Stadium — opened as a nine-point favorite over the Jayhawks.

By the end of Sunday, that spread jumped to as high as 11.5 points.

Former KU linebacker Steven Johnson was one of the Denver Broncos’ final cuts this weekend, as NFL teams were forced to finalize their 53-man rosters.

Within hours of being released by the Broncos, Johnson, a four-year pro who mostly has played as a back-up on defense and starter on special teams, was picked up off waivers by the Tennessee Titans.

After the game on Saturday, I now have hope. We have a coach and a staff that will get our Jayhawks turned around. A lot of work remains to be done and this season will be tough, but I am a believer. The team was fun to watch and competed to the bitter end. ROCK CHALK!

Agreed. I believe in these guys and they showed my something to believe in on Saturday. God bless them... Can't wait for the Memphis game. Rock chalk

We still fail to see results from Clint Bowen. I thought our secondary last year showed decent progress, and thats because of Campo.

I've got to think Beaty was handcuffed to Bowen when asked to coach this program. If the defense doesn't make good strides toward improvement throughout the season, it's time to find someone that knows what he's doing.

Likens and Beaty are competent, they have a plan and a vision, and will keep this offense moving. Unfortunately my confidence in our defense making that same kind of progress under Bowen's leadership is not there.

You realize how many players we lost on defense right? I'm not saying Bowen is a great DC, but I'm also not going to put all the blame on him. I would have loved to see more from our defense, but we have to remember what he's working with. I do agree that Beaty getting the job probably had something to do with his agreement to keep Bowen on the staff. Either way it's going to be a long season on offense and defense.

John - I'm not attacking your opinion, but the excuses for Bowen need to end. It's time this program holds his performances accountable. Just because he's a Jayhawk and has been in the program a long time, doesn't give him a free pass to be our defensive coordinator. This program revolves around the concept of "earning it". The same should apply with the coaches as well.

Get your forecasts right, then you can criticize.

I don't feel like I was making excuses. I can see your comprehension skills still haven't developed past the 1st grade level. You're wrong by the way. Can you handle being wrong?

These are excuses plain and simple Fitz.

I hear complaints on here about the recruits we get... and I believe you've been one of those complaining then you come here and say that it isn't a legitimate reason. Not every reason can be an "excuse". If you think we're undermanned then you claim that isn't a reason, what is it that you really believe? What side of the fence will you be on tomorrow?

We did not have good defenses under Campo either.

We have had poor teams in general for 6 years in a row. One of those was MM's last year. Clint Bowen cannot play DT. Anyone who watched this game knows we did not have the horses up front for our secondary and LB's to be able to perform at their max.

It may take a couple of years to get our DL up to speed. DT's are the hardest things to find in the High Schools. Those are the kids we need.

My understanding has been that Memphis doesn't exactly have a great football program either. They may be favored, but I think we stand a better chance against them than the oddsmakers or even some of our own fans give us credit for.

Fitz, learn a little Defense before you criticize some of those that do.