With the game well out of hand Kansas head coach David Beaty looks at the video board during the fourth quarter, Saturday, Oct. 31, 2015 at Memorial Stadium.

Throw Oklahoma coach Bob Stoops into the circle of football minds who both believe in and sympathize with first-year Kansas University football coach David Beaty.

Stoops, speaking after his 14th-ranked Sooners steam-rolled Beaty's Jayhawks 62-7 at Memorial Stadium, had nothing but good things to say about KU's fourth head coach since the start of the 2010 season.

"First, I just want to say I think the world (of) Coach Beaty,” Stoops began. “He's doing all the right things here. It takes time. He came into a tough situation, but, again, I know their guys over there and some of their coaches, they will stay positive and continue to work with these guys.”

One year after watching freshman running back Samaje Perine light up a Kansas defense for an NCAA-record 427 rushing yards, Stoops witnessed another one of his guys turn in a memorable day. 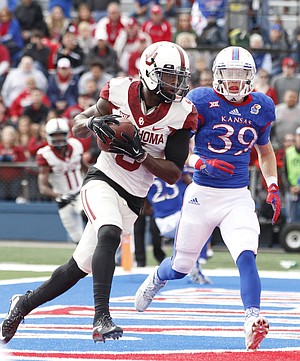 Transfer quarterback Baker Mayfield, who beat out returning starter Trevor Knight for the starting nod, finished with 383 yards on 27 of 32 passing in just over two quarters of play. Mayfield, a junior who sat out the 2014 season after transferring from Texas Tech, showcased the total package in rolling the Jayhawks (0-8 overall, 0-5 Big 12).

“I thought Baker Mayfield again (did a great job with) decision making, handing the ball off, throwing quick options,” Stoops said. “He is really doing a great job with all of that. I thought the execution was excellent.”

After the loss, Beaty said he thought the predictable nature of Kansas paying a little extra attention to Perine this season might have aided the Sooners' passing attack. OU senior Sterling Shepard agreed.

“(We) did a great job running the ball,” said Shepard, who finished with 183 yards on 11 catches as his team improved to 7-1 overall and 4-1 in the Big 12. “So you have no choice but to load the box because you have to stop Perine and Joe Mixon. It definitely helps us wideouts a lot and we have to continue to win one-on-one battles and make competitive catches. I feel like the guys did a great job of that today.

“I feel like we are putting things together. Things are starting to gel and we are just continuing to build each and every week. During practice, guys are focused and that's the main thing I see out of this group of guys. That is something we have to continue to do.”

Obviously lots of people enjoy watching football no matter what so I say enjoy all of the moments and get on with it.

Life is what you make of it on homecoming days and game days in general.

I do believe Coach Stoops means it when he says our coaches are going about it the right way. And I believe it, too. But it is painful living in Oklahoma when you get smiles AND sympathy from the folks down here. They even tell you what any respectable KU fan seems to be thinking this time of year, which is, "wait for basketball." OK! OK! I'm waiting and it can't get here fast enough!

HH, I've always been one of those fans that have never publicly stated to any apposing teams fans; just wait for basketball. It's a low place I choose not to go. So, there's nothing wrong with thinking it or talking to your KU bretheren about it, just don't give the opposition the satisfaction of hearing it. I was there Saturday and stayed to within 12 minutes in the fourth quarter. I (obviously) don't go to see another W because those are not going to happen this year. I do think there is a slight chance with our last two games, but the reality is, we are outmatched in every game. I do go (other than the fact I have season tickets), to see how the foundation of the program is coming. I for one like the pieces we have, and with some upcoming solid recruiting classes, think we'll be fine in Beaty's third year when all these freshman are juniors. I'm confident in this staff, their ability to coach, recruit, and build a solid program. Willis is going to be the man for the next several years if he stays healthy. The receivers are good although too many dropped balls yesterday. We're really young people, but a brighter future is coming. So going back to the beginning, look forward to basketball, just don't use it as a crutch when football season is going on. At least that's my take. Rock Chalk all!!!

My sentiments too. Well expressed.

Willis was good. Even better if our receivers had dropped some easy catches.

Must say our band was great all day!

As a life long OU fan, I am glad to see Coach Stoops trying to give some aid and comfort to his opponents at KU. I remember the days of Bud Wilkenson and more recently Barry Switzer. Football is a religion in Norman, I like to tell folks that there are two religious icons visible when you drive into Norman from the interstate, the bell tower at McFarland Methodist Church and the press box at Owen Stadium.

But there is no such demonstration of support prior to the football season, nothing to indicate that the support of the University is similar to the overwhelming party provided prior to the basketball season.

KU simply has the wrong person in the athletic director office. KU has a basketball coach who has a resume of proven success at his prior jobs. Zenger has never hired a football HC with a proven record of sustained success.

How the hell did they score 123 points in the OSU-TT game? That doesn’t even sound possible. I wonder what was the over/under.

With 4 games to go. I wonder If DB will mix it up and start moving some more players to play. Do we have any walk on or scout team players ready? At this point I don't think we have much to lose (we are already losing by +6 TDs). I realize its a potential waste of an eligibility year. However it would be nice to know if we have an athlete in the shadows who is ready. Do we have an aggressive kids (maybe smart IQ) worth giving a shot? Throw the standard weight/height requirements out the door (because that hasn't produced results). I'm looking more for the heart, aggressiveness, and skills to play. Maybe we have a diamond in the rough and not realize it. For example, it would be great to be surprised by an athlete who's hungry to surprise everyone and step into the LB, O-line, or D-line ranks. It would be great to see more aggressiveness on the field on game day (without penalties). If we have these type players. Put them on the field.

You don't burn redshirts at this point in the season unless there's injuries. KU has gotten 7.5 sacks from freshmen DLinemen this year. I'm sure that's at or near the top of the country in that category so there are already good young players making an impact for KU's defense.

Well said...if the standard is a short-sighted fairy tale with a liberal dose of self-importance.