KU’s 19 players are two more than last year’s previous high of 17 Jayhawks. Kentucky, by the way, opens the 2015-16 season with 21 players on NBA rosters.

Oubre was selected by Atlanta — for the Washington Wizards — with the No. 15 pick in the 2015 NBA Draft. He stole headlines before and after the draft with some brash comments about his own ability.

“I just go hard. I try to go as hard as I can every possession. That’s the way I’m going to succeed in this league — going hard to make a name for myself — so I’m just trying to play with a chip on my shoulder and make sure I’m a good teammate, first and foremost,” Oubre told the Washington Post. 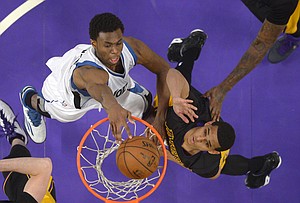 “I’m a rookie and the youngest guy on the team, so there’s a lot of older guys and veterans, guys that have been around,” Oubre told the Post. “They kind of embraced me as their younger brother so I kind of take that role and I just try to learn from them as much as possible.”

Alexander, according to Hoopshype.com, will make $525,093 this season as an undrafted free agent with the Portland Trail Blazers. There’s a team option for $874,636 next season. Alexander made the active roster despite a nasty knee bruise that prevented him from playing in any preseason games.

“He should have been drafted in the first round, if you ask me,” veteran center Chris Kaman, who is entering his 13th NBA season, told the Oregonian. “He is an animal. Getting him as an undrafted player is unbelievable.”

Of playing with James, Kaun told Cleveland.com, “he is one of those players who sees lots of things and makes quick decisions, quick passes.”

Jeff Withey has moved from the New Orleans Pelicans to the Utah Jazz where he is on a one-year deal worth $947,276. Thomas Robinson, who spent the last two years with Portland, now is with the Brooklyn Nets where he’ll earn $981,348 this season and has a player option for $1,050,961 next year.

Several Jayhawks remain on the team they played for a year ago.