Mason all business on court

Mason pinpointed the reason he rarely grins after made baskets or alley oop passes to his teammates for highlight-reel slams.

“I’m just thinking about winning — the final score every game. That’s what goes through my mind,” Mason said. “I want to win every game. No matter what happens or how the game is going, I want to win.”

KU has won 52 games against 19 losses and snared a pair of Big 12 regular-season titles in his first two years at KU. However, the Jayhawks are just 2-2 in the NCAA Tournament in that span, last March suffering a defeat to Wichita State in the third round.

“I think about it all the time,” he said of a 78-65 setback to WSU in Omaha in which he had 16 points, one assist and five turnovers in 29 minutes. “Right now I’m just trying to focus on the season. (But) I definitely have flashbacks of that game. Stuff happens. We weren’t at our best then. They were the better team and got the win.”

Mason had a stellar sophomore season in averaging 12.6 points, second best mark on the team. He also dished 142 assists against 74 tunovers while leading the squad in minutes played (33.2 per contest). For his efforts, he earned second-team all-Big 12 honors.

“Honestly I don’t care about all-Big 12 first-team, second team, honorable mention, none of that. I just want to win every game we play,” Mason said. “We’ll try our hardest to work hard to do whatever coach (Bill Self) wants to give us the best chance to be successful. All that other stuff doesn’t matter to me.”

Mason’s on-court production combined with his focus and intensity make him the obvious choice for team leader again this season.

“You have to have a guy that’s really vocal out there and a great leader to get everyone going, everyone motivated,” said the no-nonsense Mason, who admits his biggest joy is keeping up with his family back home in Virginia.

“My son is doing good,” he said of Amari, who is in pre-kindergarten. “He just started school. We’re pretty excited about that. I definitely do miss home. I miss everyone. I try to look at the bigger picture, stay positive. I’m always thinking about the things I can control. I do Facetime with him, just to see that face and get me in a better mood.”

Recruiting talk: Mitch Lightfoot, a 6-8, 210-pound senior power forward from Gilbert (Arizona) Christian High, will announce his college choice at 3 p.m., Central time, Saturday, at the 2015 Arizona Preps Fall Showcase in Glendale, Arizona. The finalists for Rivals.com’s 117th-rated player nationally are KU, Arizona, St. John’s, Utah and Stanford with many recruiting analysts believing KU will win out over U of A. Lightfoot averaged 17.9 points, 9.7 rebounds and 3.9 blocks a game last year for state champion Gilbert.

“Lightfoot is an attractive recruit not only because he is able to stretch the defense with his ability to hit three-pointers, but because of his toughness and quickness around the rim. He is a strong defender who anticipates well and has a nasty streak that coaches love,” writes Richard Obert of azcentral.com.

Also this weekend, Jarrett Allen, a 6-9 senior forward from St. Stephens Episcopal School in Austin, Texas, who is ranked No. 20 nationally, will make an official visit to KU. He is also considering Notre Dame, Houston, Indiana, Kansas State, Kentucky, North Carolina and Texas.

We have to get Lightfoot. He may not be able to post up, but his songwriting skills cannot be questioned:

Sometimes I think it's a sin

When I feel like I'm winnin' when I'm losin' again

"If I Could Read Your Foot", by Gordon Lightmind?

Love the references to Gordon Lightfoot, one of my all-time favorite folk singers. Mitch would be a good addition and perhaps a four year player with Perry Ellis-like character.

We're continuing to see Frank Mason's growth as a leader.

Had a sundown chick. Never got over her.

That's what we guys do... There is always that one where maybe things worked out differently.

I'm sure some will scoff at Lightfoot's ranking, but I'd also be willing to bet his ranking improves significantly if he ends up inking with Kansas or Arizona.

Lightfoot would be a nice pickup, considering the amount of front-court players (4) Bill Self will be losing after this season. There will still be plenty of room for Self to entice a 5-star, bluechip recruit to come play for a season and fill the immediate need for a post presence.

I do like the idea of moving Mason to the 2 and Selden to the 3 with Devontae at the point, but I really really want to see Svi get his minutes along with Brannen. When they get their opportunity they need to take advantage and nail every 3 pointer they get and force Self to put them on the floor.

Its good we are looking outside the top 100, there are only 25 left in the top 100 and not many are leaning our way.

Top 100 guys do not grow up dreaming about winning the Big 12.

True Rob BUT they do dream about playing for Kansas.

Mason was pretty open and honest during this interview. Tends to make him seem trustworthy. Takes his position and opportunity seriously. Hope he nails it this year.

Lightfoot will be a 4 Star recruit before the final rankings are done. If I had to guess, I would think somewhere in the 80s. Not great but by his 3rd and 4th season, he will be a contributor on the court. These kids sometimes are the glue that spans their careers at KU. I hope we get him as he won't scare away any of the top frontcourt players we are after and it would be nice to finally have one in the books. 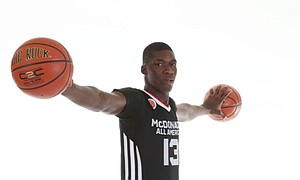