Kansas players, from left, Tiana Dockery, Cassie Wait, Madison Rigdon, Anna Church, Tayler Soucie and Ainise Havili celebrate after scoring a point during their volleyball match against Oklahoma Wednesday evening at the Horejsi Center. The Jayhawks swept the Sooners, 3-0, and improved their record to a perfect 19-0 on the year. On Friday, No. 7 Kansas travels to Austin to take to face the No. 2 Texas Longhorns.

Kansas University’s Cassie Wait and Tiana Dockery chased down the volleyball in the back corner early in the second set Wednesday night against Oklahoma and managed to avoid any carnage, as Wait stole the play away from Dockery, and sent a pass toward the net at Horejsi Family Athletics Center.

A couple of seconds later, KU’s Ainise Havili delivered a set above the net and Tayler Soucie hammered home yet another KU point in a 25-18, 25-22, 25-18 victory.

All Dockery and Wait could do was laugh as they briefly celebrated their lead and Dockery jokingly pushed Wait away.

The No. 7-ranked Jayhawks (19-0 overall, 7-0 Big 12) just don’t have many cares these days, as they find themselves rolling through the regular season. Not only are coach Ray Bechard’s Jayhawks undefeated — joining top-ranked USC as the only teams which can make that claim — but they’re also rarely dropping a set. KU’s most recent win marked its 14th sweep of the season. Going set by set, Kansas has a record of 57-5. 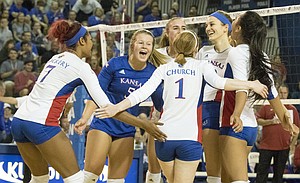 “I’m surprised at our set record,” Bechard admitted, “but I think when you play hard and you play hard for each other, you’ve got an opportunity to do some pretty cool things.”

A senior, Dockery said Bechard has the Jayhawks achieving intense focus each and every set. As a result, they’re routinely beating their opponents to 25 points.

“We talk about it all the time, how crazy it is,” Dockery said of KU’s repeated 3-0 and 3-1 victories in 2015. “But I don’t think it’s really hit us that much yet. We’re just playing right now. But I feel like as we get farther and farther into conference and see how well we do after that, I think that’s when it will.”

KU swept four Big 12 matches in a row before dropping the second set at Baylor on Oct. 14. Crazy as it sounds, Dockery said such hiccups actually jumpstart the Jayhawks.

“But we were like, ‘You know what? It’s OK. Things happen. They’re playing really well. We can play better,’” Payne said.

According to Bechard, KU’s players don’t get angry when they allow another team to win a set. They simply try to play as close to their ceiling as possible and realize doing so will give them a good chance to keep up their spectacular run.