New Kansas University women’s basketball coach Brandon Schneider, while amped up for his first Late Night in the Phog, realized the 12-minute scrimmage his players put on for a packed Allen Fieldhouse wouldn’t exactly give KU fans an accurate preview of what’s to come.

“I think you could see that we really want to spread the floor,” Schneider said of the Jayhawks’ offensive philosophy. “But we’ve really only had two practices. We’ve probably had 15 Late Night practices, so right now we’re a lot better at dancing than we are at executing the offense.” 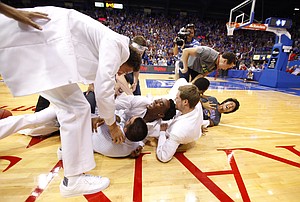 Even though the final score read Blue 11, Crimson 8, the new head coach learned a valuable lesson about what to take away from the scrimmage from assistants Aqua Franklin and Katie O’Connor, who have been through Late Night shenanigans in the past.

“You really just have to get through this weekend, see it for what it is,” Schneider said of their advice. “We’ll really buckle down next week and get to real practices.”

The Jayhawks combined to shoot 8-for-30 from the floor, but their coach wasn’t particularly concerned about that, either, considering they had spent a portion of the night doing dance routines for thousands of fans.

“Just the emotion that goes into all of that, it wouldn’t surprise me if you go out there and shoot a bunch of air balls,” he said.

“I just like being able to show off our personalities a little bit. I think it’s really cool,” Aldridge said of the dance segments, giving credit to junior forward Caelynn Manning-Allen, in particular, for her ability to embrace the spotlight.

“On the court,” Aldridge said, “you only get to see her game face: ‘What do I have to do to win this game?’”

The Jayhawks provided a few basketball highlights, too. Freshman point guard Aisia Robertson passed up an opportunity to score in transition and dished a no-look pass behind her head to sophomore guard Chayla Cheadle, who was trailing the play and scored a layup. Later, Robertson got the crowd going again with a three-pointer.

Aldridge said she couldn’t have done anything like that when she was a freshman because she was too busy just trying to keep her head above water. She was proud to see Robertson, a freshman from San Francisco, embrace the atmosphere and win over the fans.

“You can watch me play in November and realize that I’m not a flashy player,” Aldridge said. “I’m not daring enough to do those things.”