Team USA coach Bill Self congratulates the players on the bench in the closing seconds of the United States' 78-68 semifinal victory over Russia on Sunday, July 12, 2015, at the World University Games in South Korea.

Kansas City, Mo. — Bill Self wore a tuxedo, not a sports coat, when he last entered The Midland Theater in the Power and Light District in downtown KC.

“Last time I was in this venue it cost me quite a bit of money because my daughter Lauren’s wedding reception was here,” Self, KU’s 13th-year basketball coach, said smiling, Tuesday night at the Coaches Vs. Cancer season tipoff event. “It was a great venue for that (Aug. 16, 2014 event). It’s a great venue for a multitude of events, including tonight’s,” Self added.

Self has attended all eight Coaches Vs. Cancer preseason fundraisers — the other locales were the College Basketball Experience next to Sprint Center and Municipal Auditorium. 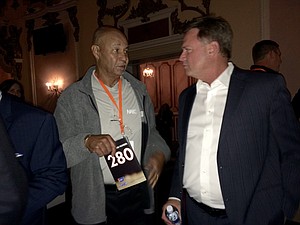 Reggie Minton, left, deputy executive director of the National Association of Basketball coaches, visits with KU men's coach Bill Self prior to a Coaches vs. Cancer event Tuesday night in Kansas City, Missouri.

“I don’t know if anybody looks great (at practice). I’d say Perry (Ellis) has looked the best so far,” Self said of the Wichita senior who Tuesday was named third-team All-America by cbssports.com.

“Frank’s (Mason) been fine; Devonté’s (Graham) been fine. Svi (Mykhailiuk) and Brannen (Greene) have each shown flashes. All the bigs have shown flashes at different times, but nobody’s playing great. It’s hard to tell who is playing well when all you are basically doing is drills and halfcourt and not really playing yet,” Self added.

He reiterated it should be at least a couple weeks before hearing any word on the eligibility of Cheick Diallo, a 6-9 freshman from Mali.

“To say where it is in the legislative process ... I think it’s still in its infant stages,” Self said, noting KU was still gathering academic information, including some from Diallo’s homeland of Mali, to send to the NCAA Eligibility Center.

“If something were to happen and we not get a good outcome, I think we have every right to appeal that,” Self said. “I think they are giving us an opportunity to present before they give an outcome.”

Self was asked if the fact Diallo did well in summer school and is faring well in his first semester classes at KU would help his cause.

“You would think there would be a lot of stuff that could potentially help his case,” Self said. “I don’t know if coursework already done in college has anything to do with initial eligibility. If that does play a factor that will be one of our mitigating factors that would be very beneficial because he’s done quite well. The problem is obviously with the school (Diallo’s Our Savior New American). We don’t know exactly what those problems are. We’re trying to sift through it, get as much information for them to make a determination. They want us to do exactly what we are doing.”

As to how Diallo is playing ... “He and Lagerald (Vick, freshman guard) are probably a little bit further behind than Carlton (Bragg, frosh forward) at this stage. That will all change in a week,” Self said. “He just needs a few reps out there. Everything is so new to him right now that he has no clue on what he’s doing. Give him a couple weeks to figure it out. I think he’ll get caught up fast.”

New digs are open: The Jayhawk players today will move into their new $12 million McCarthy Hall. “It passed inspection today and the guys will be moving in tomorrow. It’s exciting,” Self said. In all, 36 individuals will live in the hall: It breaks down to 16 basketball players and 17 students not affiliated with the hoops program. There’s also beds downstairs for two guests and one for the resident adviser.

No conflict with Royals: Self is pleased the Royals are playing an afternoon playoff game Friday. Late Night in the Phog begins at 6:30 p.m. He’s counting on the usual packed fieldhouse.

“We caught a break,” Self said. “Go to the bar and watch our Royals and then drive on over to see us play,” he added, smiling.

Set Cheick free! I really think this is about these types of schools which he attended, and not as much about this kid. I wish we could get more transparency about these schools, the NCAA, and the issues and the politics behind this. I understand the confidentiality with a specific student. But what are the larger issues? In the meantime, this poor kid from a west African nation gets caught up in this crap. Does the NCAA even care about this kid? At what point is this just old fashioned "tail wagging the dog?" I would love to hear Coach Self uncensored on his true thoughts. He has to be politically correct and careful right now and I get that. But there is just something not right and not fair about all of this.

I'm not a big social science kind of person but our society in general should make a commitment to education our youth. It's hard to believe Diallo;s HS (St. Mary Holy Perpetual Savior or whatever) can not be any worse than many or most of the HS in our large cities.

It is sketchy at best. Which is why most years players have elg. issues coming out of there.

It may be the lack of documentation of it's accreditation, rather than the actual level of coursework. Most of these foreign students are actually better prepared for college courses than American students.

You don't even know what you are talking about.

Lots of students have to go through this, poor, not poor rich whatever that makes no sense. Why is it a question of the NCAA not caring about a student when they are still awaiting from info from KU, Mali? Tail wagging the dog? Why cause a few players eligibility has come into question? It is the every year now review of OSNA schools eligibility of students. This is not new at that school, it is common. Direct your frustration to the right place at least.​

With repeat offenses, how do these sketchy schools even survive?