QB problems: Cozart out indefinitely with shoulder sprain, Ford out for the season 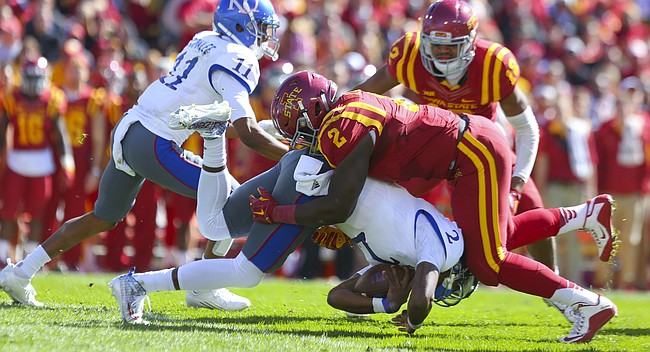 Kansas quarterback Montell Cozart (2) is dropped to the turf underneath Iowa State linebacker Jordan Harris (2) during the second quarter on Saturday, Oct. 3, 2015 at Jack Trice Stadium in Ames, Iowa.

It seemed like this was the next logical step. And it was made official Monday, when Kansas University football officials announced that junior quarterback Montell Cozart was out indefinitely with a shoulder sprain.

It is Ryan Willis time at KU.

Cozart will not play this week vs. Baylor — 11 a.m. Saturday at Memorial Stadium — and will be reevaluated next week.

In addition, junior Deondre Ford, who started KU's loss at Rutgers but was knocked out of that one with a thumb injury, will miss the rest of the year and will have surgery in the near future to repair damaged ligaments in the thumb.

That leaves Willis as the only quarterback on the KU roster with any significant experience and even that is extremely limited.

Willis, who filled in for Cozart during the final few drives of last week's loss at Iowa State, finished 8-of-16 passing for 100 yards and showed some decent flashes during that stretch. Before that, Willis' only game experience came on the third series of the ISU game — a move that KU coach David Beaty said was part of the game plan to get him some work — and two plays during the season opener when Cozart was momentarily knocked out of that game.

Armed with that limited experience, the Bishop Miege High graduate will now be asked to lead the Kansas offense against the No. 3 team in the nation this weekend.

"Obviously, he's the next man up and his turn has come," Beaty said after the Iowa State loss.

The injuries to Cozart and Ford severely change the outlook of KU's depth chart at the QB position.

Willis, with all of his 20 or so snaps, slides into the No. 1 spot and junior T.J. Millweard, who has been off the depth chart most of the season and become known primarily as KU's holder, is listed as the No. 2 quarterback ahead of red-shirt freshman walk-on Keaton Perry, who is listed third.

The absence of true freshman Carter Stanley, who has not suited up for most of KU's games this seasons seems like a clear indication that the Vero Beach, Florida, prospect likely will red-shirt this season.

As for Willis, he connected on a couple of deep balls down the field against Iowa State last weekend and showed the zip on his passes that coaches and teammates have talked about since he arrived on campus. He also showed his inexperience by hanging in the pocket a little long at times, taking a couple of hits both in the pocket and on the run and being a little slow with his reads, which allowed the ISU defense to blow up KU's play call quickly.

All of that, however, is to be expected from a true freshman. And Beaty said both he and Willis were aware of it and already had discussed it.

“You learn the hard way pretty quickly," Beaty said after that loss. "He got hit one good time and he came to the sideline and he said, 'I know. I gotta get down.'”

Well, at least our first significant injuries of the season didn't come at an important position......

First off, I hope that Ford can get a medical redshirt and that Montell recovers quickly. I don't like seeing any Jayhawks in pain, and I wish them both quick recoveries.

Willis is going to need some protection or we're going to run out of guys. I would anticipate some different looks designed to give him an extra blocker, not because he can't run the offense, but because we can't risk losing him.

Things just got a little tougher for this team. They'll need everybody in the stands possible on Saturday to show some support. Get your butts to the game!

This is GREAT news. This season is a wash, and if Cozart is indeed the QB of the future, the future is bleak. Maybe Willis can be something. Stanley redshirting? Hopefully that means Beaty is counting on him being a significant player down the road.

Obviously I don't mean it's great news that guys are injured. Just that it's good some other QB's are getting game experience.

I think everybody understands

I agree that Willis growing into the starting role is probably the best thing we can accomplish this year. But the timing isn't ideal. Going into a game against Shawn Oakman with a struggling offensive line and 2 of the top 3 quarterbacks unavailable? Yikes. Get the ball out quickly, Ryan!

I've been very encouraged by what I've seen this year. Consistency takes time, but you see guys making good tackles, filling holes, improvement in tackling as the season has gone on, you've seen the D-Line get some pressure, you've seen guys get open and QBs find them, you've seen big holes to run through and a nice running game at time, QBs making decent decisions and that have been able to have quite a few drives where they completed a lot of passes. The losses are tough but I'm enjoying watching some of these guys, it just feels like there are finally some guys out there that we'll be able to say 3 years from now, "I remember that kid as a freshman" and look back on it in a positive light. If they can put one penalty free game together this year I think they might surprise one unlucky opponent. That 4th down penalty on the 1st drive just felt like game over Saturday...

Wow, this can get very bad!! Ryan Willis will be good but his time is no where near now now! Yes, he did have a decent game vs Iowa State, but I think Rutger's Fields a better defense than Iowa State, and with the big boys in town, It can get awfully pretty fast!

Being a season ticket holder, I will be in the stands watching. Baylor may throw down a 100 points and I'm not joking or trying to belittle anything that's being done with our program. We are so out manned in numbers, talent and experience that it's sickening. I really feel bad and to a certain extent embarrased for the players. They are working their tails off to get better every week to some degree, but teams like Baylor, TCU, Oklahoma and others are about to go through us like a hot knife through butter. I can only hope they can keep the faith with the foundation that Beaty and crew are laying. Look at the big picture fellas because the view now is painful. RCJH!!

I want to see Ryan get some PT but not this way.

I think Ryan will be fine. He is being thrown into the fire, and he will find his way out. There is no "good time" in conference play. With -45 Vegas points against us, I am just going to hope that this is a great learning experience for everyone, and we don't come out more dinged.

I'll be happy if we can beat the spread.

Since the 2-deep was posted today, I did a little research on the All Conference Depth Chart as posted by Phil Steele before the start of the season. Steele did a 4-deep on All Conference at every position. If you take out specialists, that's 88 players, or 8.8 per Big 12 team.

So, out of 88 potential all-conference spots, we have zero going into the season. For those who want to tell the coaches to Earn It, or to pit offense against defense, etc., etc., this is really all you need to know about the state of KU football. It's not making excuses - it's real.

Going forward, roster management is everything. The fastest way to health for this program is 25 contributors in the next class.

Any way we can bring back Todd Reesing?

@Bryce Yeah there's a way, build a time machine than go back in time, and your chances of doing that is good as Kansas chances of not allowing a Big12 team to hang 100 points on them this season.