KU brings out best in Cyclones

Ames, Iowa — Kansas University’s football losing streak away from Lawrence grew to 35 games Saturday in a 38-13 loss to Iowa State.

And the opponents’ post-game notes had a familiar ring to them, packed with words such as “first” and “since.” KU brings out the best in their hosts. 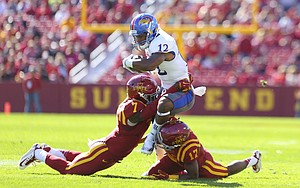 Cyclones running back Mike Warren set a school freshman record with 175 yards, the most rushing yards by an ISU player since Nov. 18, 2006 (Ryan Kock, 179 vs. Missouri). A 6-foot-1, 200-pound red-shirt freshman from Lawton, Oklahoma, Warren became the only Iowa State frosh to rush for 100 yards in back-to-back games. He gained 126 yards in a loss at Toledo. 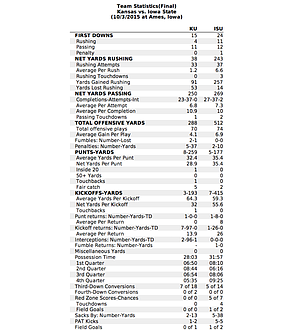 Last season, Duke freshman Shaun Wilson did one better than that in a 41-3 thrashing of Kansas. He rushed for a school record 245 yards.

Iowa State’s blockers became the latest to dominate the undersized front of the Kansas defense.

“I give credit to the line,” Warren said. “...They moved people off the ball when I was there.”

This disaster isn't even about the players or coaches. We've made every quarterback and running back that we've faced for about the past 4 years look like an All-American. This is about a lack of leadership at the top, namely Zenger.

Going back to 1901 (couldn't find the seasonal records for all of the years prior to that) this will be the worst four year stretch of football in Kansas history. What can we truly expect from this team of 62 scholarship players and a new head coach? This should be year 4 of a rapidly improving program. Instead we're at the bottom of the bottom.

The Weis hire completely killed KU football. If conference re-alignment surfaces again in the next year or two I'm not sure we'll be able to hold a spot in the Big 12. The establishment of four 16 team super conferences is going to happen since there seems to be such a craze for a football playoff similar to basketball. There's no sign of KU becoming a team worthy of saying they're a top 64 team any time soon.

Zenger should be fired, or at least his salary should be cut in half. Allowing any individual to make a mistake of that magnitude and not being held accountable is an injustice to the donors to the WEF and every KU fan.

You got it right. After that hire one of the very few who understand Defense.