Kansas University freshman cross country runner Sharon Lokedi made an immediate impact in her first collegiate race, as she won the Rim Rock Classic and helped the Jayhawks to a women’s team title.

“I knew there was a girl from Rice, and what I heard from my teammates, they said she was good, and it (Rice) was a good team,” Lokedi said. “I didn’t want to put down my team, and I said from the beginning to the end, I’m going to fight for it, and I’m going for it.”

The KU freshman from Eldoret, Kenya, led a large pack of Jayhawks up front and made a move at the three-mile mark to surge into the lead. Her teammates remained tightly packed together throughout, as juniors Malika Baker, Courtney Coppinger, Jennifer Angles and Nashia Baker and senior Kelli McKenna placed fifth through ninth, respectively, to give Kansas a winning team total of 23 points. 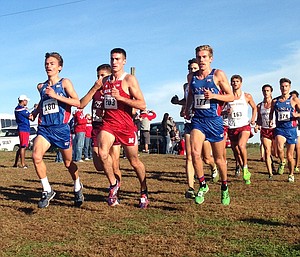 “It’s always good to see KU up front,” KU coach Stanley Redwine said, “but I think the main thing is that it shows you that the ladies have been training really well.”

After missing the 2014 cross country season due to a sacral stress reaction, Landes showed no signs of rust on his way to a winning time of 23:55.6.

“It’s my senior year, so I just kind of decided to not worry about all of the tertiary stuff and just focus on training and racing, basically,” Landes said. “I felt great throughout. Obviously the last two miles really hurt making a big surge there. It’s great to be out here.”

Landes was joined by Morgan and Southern Illinois’ Oscar Medina in the top three through three miles, but found an extra burst in the final two miles to beat out Morgan by 14 seconds.

“The big move we planned on making was after cemetery hill, trying to stretch it out after that and kind of make some people hurt a little bit,” Landes said of his and Morgan’s race strategy. “That worked out well. We ended up doing that and then just go for it the last mile and each man for himself really then.”

A 29-second gap between Morgan and KU’s No. 3 runner, Dylan Hodgson, allowed Iowa State to pack up and claim the team championship with 35 points. The Cyclones clipped the second-place Jayhawks by 12 points, but Landes was encouraged by the performances of KU’s younger runners.

“I’ve been really impressed with that freshmen class — Dylan Hodgson, Michael Melgares — those guys are really crushing it right now, doing things that none of us were doing as freshmen,” Landes said.

Saturday’s performances from the Kansas men and women gave Redwine a lot of confidence going forward into the team’s next race, Oct. 17 at Pre-Nationals in Louisville, Kentucky. The Jayhawks could add some more experience in their lead pack on the women’s side in two weeks, as they were without junior Hannah Richardson and sophomore Lydia Saggau on Saturday.

“(Richardson) is continuing to train and get better, same with Lydia,” Redwine said. “I think once we get those two back running with the team, we should be really deep.”