The terrain of the course has a symbolic meaning for two Jayhawk cross country runners, who are closing in on their return to KU’s home course Saturday for the Rim Rock Classic after sitting out the 2014 season due to nagging injuries.

Junior Hannah Richardson and senior Evan Landes earned all-region and All-Big 12 honors in 2013 before being sidelined, respectively, with mononucleosis and a sacral stress reaction for the 2014 season.

While Richardson and Landes nursed their injuries last season, many of their Jayhawk teammates experienced growing pains as the KU men’s and women’s teams were both among the youngest in the conference.

The two Jayhawk upperclassmen were healthy scratches along with other top runners from each team for KU’s season-opening meet, the Bob Timmons Classic at Rim Rock on Sept. 1, but seeing an improved Kansas team has Landes eager to return.

“I was excited about (the Bob Timmons Classic),” Landes said. “I feel like we have a lot more depth than we’ve had in the past couple of years. It’s great to see some of the younger guys out here holding down the fort.”

After seeing teammate Reid Buchanan earn an automatic individual-qualifying spot to the NCAA meet in 2013 with a 10,000-meter time of 30:43.5 at the Midwest regional, Landes knew that he could achieve the same feat in 2014. Landes finished just five places and eight seconds behind Buchanan at the 2013 regional and then turned in a strong track season by finishing fifth in the 10,000 at the Big 12 Outdoor Championships. 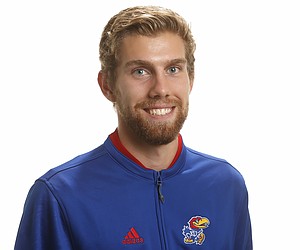 Landes returned in 2014 expecting to go out with a bang with what he thought he would his senior cross country season, but something didn’t quite feel right. The stress reaction in his sacrum, which is located in the lower back, had surfaced.

“It was about this time last year that I was diagnosed with it, and I really didn’t start running again until about November,” Landes said. “It was kind of slow racing-wise, like the whole spring wasn’t going that great, so we just decided to kind of step back, get back to training and get back to being fit again.”

One person who has helped Landes get back into top shape has been first-year strength coach John Baumann, who joined the Jayhawks from Oklahoma State.

“Just taking it from a different perspective, the athletes are getting stronger, and they seem to have liked him more,” KU head cross country and track coach Stanley Redwine said. “We’re excited about him and what he’s going to do for our cross country teams.”

As Landes was on his road to recovery last year, his new teammate Jacob Morgan, who transferred in from Colorado State, broke on to the scene to lead the Jayhawk distance squad in cross country and track. The Topeka native was the lone Jayhawk to qualify for the NCAA cross country meet. He placed 91st overall with a 10,000-meter time of 31:29.

“Being more or less the front guy at the majority of the meets was frightening at first, but I got used to it,” Morgan said. “Now I’m (trying) to keep up there and working with Evan and trying to make sure that we’re both up there at the front being low sticks for the team, being positive role models for them.”

Not being able to run alongside Morgan last year added to Landes’ frustration of being injured, but the Mulvane native put things into perspective and believes that last year has only helped make him stronger.

“Right now, I think that was a great decision (to red-shirt) because I’m pretty much in the best shape that I have been in at this point,” Landes said.

While Landes was forced to miss all of track season as well as cross country, Richardson was able to compete in the spring, but her recovery from mononucleosis was not easy.

Richardson began to show symptoms of mono as the 2014 outdoor track season was winding down and eventually had to shut down training for the remainder of the calendar year. 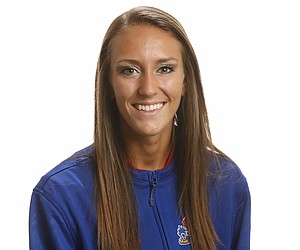 “It was really hard. When I started running again, I was going like eight-minute (per mile) pace,” Richardson said. “My runs were slow, and then he (Redwine) threw me into a couple of workouts and just told me to take it easy for a little bit. I did, but then all of a sudden we started hitting those workouts hard. Just trying to do the races and the workouts like a normal person was kind of rough because I didn’t have a lot of training under my belt.”

The fourth-year junior said she slept a lot from May to January. One of the main symptoms of mono is fatigue. Richardson felt rough while getting back into shape during indoor track season, but then went on to reach four personal bests in outdoor last spring. The Glendale, Missouri, native earned a trip to the NCAA Outdoor in the 1,500, and clocked a time of 4:29.75 to take 22nd place in the semifinal heat.

Despite running to All-Big 12 and all-region honors as a sophomore during the 2013 cross country season, Richardson indicated that she will need to help of her teammates to excel this fall.

“I have to work a lot harder to be good at cross,” Richardson said. “I’m naturally a mid-distance runner.”

Richardson will be joined by six true juniors and two Lawrence-area products, sophomore Grace Morgan from Lawrence High and senior Rachael Schaffer of Free State, and Redwine is looking forward to having an experienced women’s squad.

“We have seven juniors, who I believe will be fighting to be in our top seven, along with we have some newcomers that I believe will be fighting as well. Honestly, I think we’ll be better both men and women,” Redwine said. “The thing we’re excited about is that in order for us to make it to the NCAA, we have to do well at home. We are hosting the regional meet this year — one of nine in the U.S.”

Richardson and Landes shared Redwine’s excitement over KU hosting the NCAA Midwest Regional Championships at Rim Rock on Nov. 17. But instead of earning individual accolades at the regional meet like they did two years ago, Richardson and Landes are eyeing top-two team finishes to lock up automatic bids to the NCAA Championships, which would serve as the ultimate finish line to their recoveries.

“We’re excited about hosting regionals,” Landes said. “We hope to really show up on our home course and make a push for nationals this year.”