Kansas University basketball media day, 2014: The youngest college basketball player in the nation sat on his assigned chair — eyes a little wide, expression on the reserved side — doing his best to answer the questions sent his way. 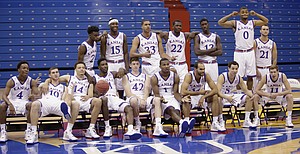 Sviatoslav Mykhailiuk looked 17, which he was. And his vibe was that of the new kid dropped in the middle of a grade-school classroom in mid-year, surrounded by students who all knew each other, spoke with the same accent, rooted for the same baseball team, knew where to find the best hot dog in town.

He was a boy in a strange land surrounded by strangers.

The man seated courtside Thursday afternoon bore little resemblance to the boy from a year ago. He’s at home in Lawrence now.

He turned the clock back a year and opened a window into what the 17-year-old boy was feeling.

“I’m not American,” he said. “It was new country for me. New language. New team. New system. New coach. It was not like for American guys who have been here all their life, playing AAU, high school, watching NCAA basketball, so they kind of know what to expect.”

Freshmen of all backgrounds tend to compile poor shooting statistics for a variety of reasons. Mykhailiuk was no exception. He appeared in 26 games, averaged 11 minutes and shot .306 from the field, .288 from three. He showed his soft touch at the free-throw line (.833) and in warmups. Getting accustomed to the speed of the game, knowing a good shot from a bad one, and generally feeling more comfortable, all should make for a better shooting year for the sophomore from Ukraine.

“I’ve been here for a year,” Svi said. “I feel more confident. I think my shot’s going to be good this year. We’ll see.”

He has added 17 pounds of muscle, which ought to help him maintain balance when being shoved cutting or driving to the hoop.

“I think it will help me on defense, too,” he said. “I can be more physical, stronger. On offense, I go inside more and make shots with contact.”

Naturally, he shoots a way higher percentage than that when spot-shooting, being fed the ball by a rebounder and moving from spot to spot along the three-point semicircle.

“Working out with him this summer, getting in the gym shooting with him, he shoots the ball like crazy,” Devonté Graham said. “He was making, like, 49 threes in a row, crazy stuff like that.”

That was such a crazy number, I had to seek confirmation.

Forty-nine in a row?

A personal record, a crazy number. Do not challenge him to a game of kihb unless you enjoy losing.

Svi will compete for a chunk of the 120 perimeter minutes with small guards Frank Mason and Graham and wings Wayne Selden Jr., Brannen Greene and LaGerald Vick.

“We’ve kind of got a crowded house back there,” Kansas coach Bill Self said. “We’ve got some good players. But Svi potentially, I think from what NBA people think, they think he’s probably as good a prospect as we have in the backcourt, and I do think he can be that, too. He’s so much stronger. He’s a different guy from a maturity and from a confidence standpoint, so I expect him … it’s hard to say you expect certain guys to do certain things if, in fact, they may not be starters, but I expect Svi to challenge for a starting position and be, without question, if he doesn’t start, be as good as any reserve in the country.”

Those are tall words, but not too tall for the 6-foot-8 Mykhailiuk to reach.

Mykailiuk's growth combined with the performance over the summer of our Big 3, Diallo's very apparent drive to excel, Self's big expectations for Graham, and a very skilled Bragg seem to be our core nucleus rotation. Self obviously has high expectations for everyone, notably Ellis, who he would like to see play at All-American levels the entire season, however for him to continue to say we'll play two little guys a majority of the time speaks volumes for his belief in Graham.

Loving the matured confidence level of this team, best since '12. Speaking to the 120 mpg Keegan refers to, if Mykailiuk can know down close to 40% of his 3s, he'll surely be a starter or surely get 25 mpg. Every knows Mason will have at-least 32 (25+32=57). Selden probably in the 30 range (57+30=87). Graham will probably get at-least 25 (87+25=112). That leaves 8 minutes for Greene and Vick. Barring injuries or some other mishap, somebody will need to red-shirt. Greene surely must be well back of the pack mainly due to his surgery and always bad defense would be my early, uninformed choice for a red-shirt.

If Self thinks the perimeter is crowded, what is his opinion about the bigs with only 80 mpg. Self (and it seems Ellis himself) is going to push the heck out of Ellis to play like that pre-injury Ellis, which will account for 34 mpg. Bragg will grab all the remaining minutes at the 4, be it 6 mpg or whatever. That leaves 40 minutes at the 5 for Diallo/Traylor/Mickelson/Lucas. Diallo is the lone red-shirt candidate, which is not going to happen if he passes the Eligibility ordeal.

This team is loaded, and Self's challenge will be selecting the best mix of talent - probably much harder than it sounds.

I'm with you on Greene. I think that Self made a comment, early after the surgery, that he wasn't red-shirting Greene (Coach-speak, I believe) but it's difficult to see a better path. How fast can you go from 80% to 100% to beating out the guys that have been getting all the game minutes?

I could imagine a scenario during the grind of January and February where a fresh Greene could definitely provide a spark, but if Svi and Devonte make Sophomore jumps, it's going to be tough for Brannen to get out of his warmups.

My preferred way of spreading the minutes would be to consistently put the opponents out of their misery with about 10-minutes to play so that the guys on the bench can get some floor time!

Is it just me or does Svi look lean and mean? He's lost the boyish look from last year. If that translates into meeting his high expectations, then "Katie bar the door"!