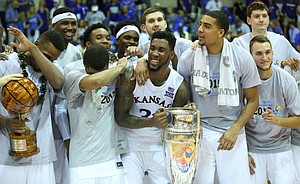 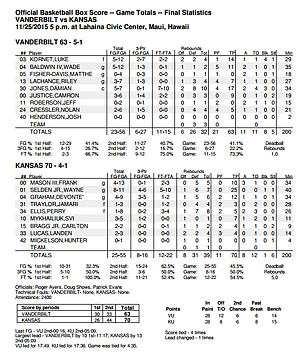 Good news to finally hear Diallo is free but he is not the only one with no idea why he was suspended 5 games. I know they dont have to provide explanations to the media or public, and I'm sure they let KU know what the problem was, but the fact that the actual student athlete is left out of the loop is disappointing. Maybe Diallo's lawyer will make it clear what he did. Bottom line is we got better today.

$165 in impermissible benefits is official reason why he's suspended 5 games. The real reason is probably because they could.

So can't we, Cheick. I feel sorry that this 'complicated' process (like the way Greg Anthony said it) will come to an end.- yes, folks, NCAA said the investigation is still ongoing. $$$ thrown for an absolutely ridiculous matter. Apparently, Cheick's nanny did his homework while he's out playing soccer!

How does Cheick say it?

OK. This name thing has to be cleared up. I am big on names and having a name someone mispronounces all the time (my mother-in-law, sadly, is one of those), I think it is important we learn to pronounce his name correctly. I appreciate our announcers and commentators who work on learning Svi's name. I can't say it right, so I stick with Svi. I agree with Kurt here. Would someone on the LJW staff please ask Cheick the correct pronunciation of both of his names? Let's get everything off to a good start!

So happy for this young man and of course for Kansas basketball! I do think it's ridiculous that he got 5 games because someone probably bought him a cheeseburger. But it's totally fine for a university to spend $100K for him proving that he's eligible...

I’m Thankful that he is now on board! Unfortunately most fans won’t be able to see his first game via the Jayhawk Network. He was freed, now it’s time to free Jayhawk fans less fortunate who cannot attend games or see them on TV for the “lesser” games. KU needs to do away with their exclusivity deal with Time Warner/Comcast. It’s shameful that any taxpayer whose tax payments contribute to and support the university whether they like it or not cannot see some games while others can.

Take the City of Olathe, for example. It is one of five cities in the state with a six figure population, but Time Warner doesn’t provide services there. And if you’ve lived there long you’d likely be of the opinion that the service would have to be free before you’d do business with Comcast. Query such an Internet search and you’d find many references reporting that combined the two are perennial bottom dwellers in customer satisfaction. At this link is just one, but mild as far as criticism compared to other sites: http://www.consumerreports.org/cro/news/2015/05/cable-tv-customer-dissatisfaction/index.htm

I pondered whether I should post my opinion, but I decided that the administration chose to challenge the NCAA for obvious wrong doings, so no reason one shouldn’t call-out KU for this TV issue. KU enjoys top dollar from the national broadcast deals. They don't need to squeeze every last dime from the locals. I’m just sayin’!!

Motor-on, Mr. Diallo, and have some real fun! RCJH!

I presume that $100,000 was paid by KU Athletics, the independent corporation and not the University of Kansas with state funds obviously.

Now that the 6+ month ordeal is over for both Cheick Diallo and KU, the NCAA should adopt a “Fair Warning Policy (FWP)" for all top-100 recruited student-athletes applying for admission to NCAA Division I universities. This policy would immediately trigger a determination by the NCAA Eligibility Center regarding the student-athlete’s qualification to participate in intercollegiate athletics. Ideally, such an investigation would be completed and the results reported to the university(s) to which the student-athlete has applied before any Letter of Intent or Grant In Aid is issued to the applicant. As a result, any student-athlete who fails to meet the NCAA eligibility standard would be disclosed to school(s) considering admission of the recruited student-athlete. Feasible?

Cheick, take out all those frustrations on Loyola. Can't wait to see you play!!