And though he was thankful the 6-foot-9 freshman forward from Mali had been cleared by the NCAA to play in games starting Dec. 1 versus Loyola, he remained a bit concerned Diallo had to miss two exhibition contests and five regular-season games.

The NCAA indicated in a news release: “Based on the amateurism review, the NCAA concluded that Diallo received a limited amount of extra benefits (that Diallo must pay back to charity). Therefore, Diallo is not eligible to play for five contests, including the four games Kansas has already played.” 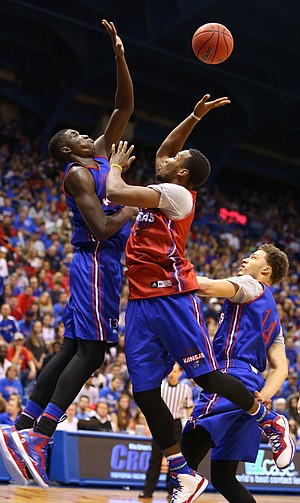 “Those were the alleged benefits that Mr. Drame gave Cheick during the 20-day period prior to his legal guardianship going into effect. Totally ridiculous,” Jackson told the J-W.

“In that short window, he (Drame) assisted him and was not ‘quote’ legal guardian yet. That would be like filing for adoption and providing something two days before adoption became final. Let’s be candid,” Jackson added. “This five-game suspension was nothing more than a pre-textual justification for a flawed investigation. There were no legitimate academic issues relative to Cheick’s secondary school education and no legitimate amateurism issues relative to Cheick’s involvement with Mr. Drame. Conveniently, the fifth game of Cheick's five-game suspension is today’s game (vs. Vanderbilt). This case cast a spotlight on the flawed methodology of Eligibility Center investigations. This young man served a ‘de facto’ suspension with no credible justification for his suspension,” Jackson added.

Regarding the academic side of the case (the alleged lack of enough core courses) that Self mentioned, the NCAA did point out “the university provided new information to the NCAA on Nov. 20, including an independent review of Diallo’s coursework. Based on both the independent review and the Eligibility Center’s existing information, the NCAA approved his initial eligibility waiver.”

So KU’s work in hiring two independent groups that studied Diallo’s core courses at Our Savior New American was a factor in Diallo becoming eligible. As was Drame hiring Jackson to represent him.

“That’s been the thing most frustrating to me is the total lack of partnership between the NCAA and its member institutions. Fortunately, with us, we had the means to stand up and fight for our kid,” Self said. “Fortunately for us we had administration that felt all along we were 100 percent right on this and wanted to fight for our kid (to the tune of about $100,000 in expenses incurred by KU). There’s probably a lot of schools out there that don’t have the means to do this kind of stuff. I do think that’s something moving forward everybody should work better together.” 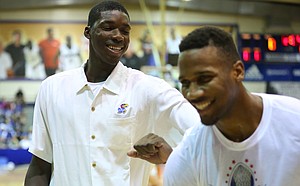 Jackson is so bothered by the NCAA’s handling of the initial eligibility case, he recommended schools taking legal action in the future.

“It is my hope that this case serves as an impetus for other member institutions and student-athletes to aggressively challenge the intrusive and manifestly illegal actions of the Eligibility Center in these types of investigations. It is my belief that these investigations will only be modified by action of a federal court. Further, I have said repeatedly over the past decade that it was my belief that these types of investigations were grounded in a discriminatory application of NCAA legislation (to African-American and international student-athletes). Today’s decision provided further support for that belief,” Jackson said.

Meanwhile, Self, who spoke with Diallo shortly after learning of the decision, finally obtains the services of a McDonald’s All-American.

“Cheick is excited. Obviously it is going to be a big relief for him,” Self said. “Hopefully he can get back to just being Cheick and not have so many things hanging over his head. I think he’s done a nice job dealing with the stress. He’s probably done much better than I’ve done.

“He never let anger become a factor in this. It was more frustration. With me it would have been total anger the whole time. I think he handled it very well from a frustration standpoint. He hasn’t been himself on the basketball court. He’s been himself off the court for the most part. He’s a happy-go-lucky kid that hopefully can get back to who he is and not have the stress of not being part of something all along he knew he deserved to be part of.”

It could take Diallo a while to emerge as a force.

“He’s been on the second team or scout team for three weeks now,” Self said. “He’s not been able to practice a week. I think he’ll make us better. I think it’ll be one of those things that immediate impact will be limited to what the long-term impact will have, once we get into conference play and February, because he’s raw.”

KU AD Sheahon Zenger: “I really want to thank the NCAA staff for guiding this process to a fair conclusion in what was a very complicated situation.”

Tidiane Drame, legal guardian of Diallo: “I am glad that Cheick was granted eligibility. The NCAA attempted to save face because they knew since Day One that I did nothing wrong and that Cheick should have been granted immediate eligibility.”

Oliver Luck, NCAA executive vice president of regulatory affairs: “Our goal is to have eligibility decisions made prior to the start of a student-athlete’s season. However, this was a complicated case involving international transcripts and a high school that remains under review. Additionally, staff considered a complex set of circumstances regarding amateurism.”

KU assistant Norm Roberts on the pre-game radio broadcast, before Kansas faced Vanderbilt for the Maui Invitational title, explained how Self let the team know about Diallo being deemed fit for play by the NCAA starting Dec. 1 against Loyola.

“We were at pre-game and coach announced to the guys what was going on,” Roberts said. “Guys stood up and started clapping for Cheick. He had a big smile on his face. We’re so happy for the kid this is over with. We can move on as a team. He can move on as a player.”

Now recruits will see what KU has done and maybe lean a little further our way.

I think the NCAA is going to get comeuppance for how they handled this. If they go into denial mode it will be worse. The homily that "It's not the crime, it's the cover up." Should guide them. I wonder if a sacrificial lamb will be offered up.

I hope it has some sway over the 9 recruits left out of the Top 100, of which we have offers to only 7.

Rodney, It has been both of our thinking we need big time recruits to go deep.

This will die down and it will be business as usual with the NCAA and their member institutions. Sadly, it seems real systemic change has to be driven through the courts. The hypocrisy of the use of the sacred word of "amateurism" in the context of both the NCAA and many of it's member institutions who make millions off of talents of these kids is more than apparent.

A review of their process is warranted, nothing more.

The issue here is communication and how to proceed by all members; student, school and the NCAA. It appears the NCAA is only going to go so far and without the "new" information by outside organizations that were provided via KU was the reason we got them to move forward. KU going public on the process and what it had provided also seemed to move this forward.

This is no way to run an investigation and the NCAA should be taken to task for how this specific case was handled. If the school is responsible for doing the NCAA's work to clear a player then that should have been made clear upfront. Also the NCAA should be forthcoming early in the process.

Court is a last resort to me, there should be an open investigation into the NCAA on this issue. Its findings made public so that any other schools dealing with a case like this knows the path to a resolution.

spot on agreed. but if a kid is allowed into a university then he/she should've met the same requirements as anyone else. the new facts about amateurism explain a lot. how did everyone believe it was coursework the entire time? communication.

We do have a really short attention span as a public. I think we fans of KU will not forget for a while.

Great news, this is indeed a game changer.

I know Self won't do it, but it would be kinda fun for him to start Diallo at the Dec. 1 home game. It can be looked upon as a reward for handling his mysterious suspension with class.

"The NCAA concluded that Diallo received a limited amount of extra benefits" and his attorney said those benefits totaled $165, which sounds like Drame took him out to dinner once or twice.

Cheick: You might consider writing/publishing an open letter of thanks to Coach Self, KU Athletic Director Sheahon Zenger, guardian Tiding Drame, attorney Donald Jackson who worked so long and hard on your behalf.

Best wishes as you embark on your collegiate basketball career.

What could the "impermissible" benefits possibly have been from a legal guardian?

it was spent just prior to the guardianship.

“This five-game suspension was nothing more than a pre-textual justification for a flawed investigation. There were no legitimate academic issues relative to Cheick’s secondary school education and no legitimate amateurism issues relative to Cheick’s involvement with Mr. Drame. Conveniently, the fifth game of Cheick's five-game suspension is today’s game (vs. Vanderbilt). This case cast a spotlight on the flawed methodology of Eligibility Center investigations. This young man served a ‘de facto’ suspension with no credible justification for his suspension,” Jackson added.

I was beginning to wonder whether Cheick was going to be cleared at all, so setting aside all of the well-justified 'should-have-beens', this definitely warrants a great big expression of HAPPY THANKSGIVING, ROCK CHALK STYLE!

Jackson appears to be positioning himself to head up a class-action lawsuit. I, for one, hope he gets it.

This should not be the end of the matter. KU should sue the NCAA for the $100K they spent to get the NCAA off its fat ass and make a ruling on this matter.