Maybe all of those chants and instances of public posturing from head coach Bill Self finally worked.

The NCAA announced Wednesday afternoon Kansas University freshman big man Cheick Diallo has been cleared to play for the Jayhawks, beginning on Dec. 1, at Allen Fieldhouse against Loyola (Maryland).

“Our goal is to have eligibility decisions made prior to the start of a student-athlete’s season,” Oliver Luck, NCAA executive vice president of regulatory affairs, stated in the release. “However, this was a complicated case involving international transcripts and a high school that remains under review. Additionally, staff considered a complex set of circumstances regarding amateurism.”

Based on the amateurism review, the NCAA concluded that Diallo received a limited amount of extra benefits. Therefore, Diallo is not eligible to play for five contests, including the four games Kansas has already played, and its Maui Invitational title game tonight against Vanderbilt.

“I really want to thank the NCAA staff for guiding this process to a fair conclusion in what was a very complicated situation,” Kansas athletic Sheahon Zenger said in the release.

After the news broke, Self spoke with reporters on a conference call and addressed what kind of impact Diallo will have for KU, now that he's been cleared to play.

“I really don’t know yet," Self said. "He’s been on the second team or the scout team for three weeks now and he hasn’t been able to practice for a week (per NCAA rules, with KU out of town). I think he makes us better. I think it’s gonna be one of those things that the immediate impact he’ll have will be limited compared to the longterm impact he’ll have once we get into conference play and into February. Because he’s raw. He does have a motor, he can block shots, he runs the floor with the best of them. But as far as him understanding our system and being able to react as opposed to think, I think it’s gonna take him a little bit of time — just like it would all freshmen. It would’ve been so nice — they didn’t suspend him five games, they suspended him seven because of the two exhibition games, which would have been so nice for him to get 20 minutes a game in these games, so therefore he could’ve played though his mistakes and figured it out. He’ll still have to do that, and I’m hopeful by conference play he’ll be a huge impact for us.”

Its a Thanksgiving Day Miracle!!!

Still don't like the fact he can't play tonight. Why not tonight? That is stupid

He is raw and he is going to be extremely nervous. The KU fans will give him a huge ovation, possibly standing, adding to his nervousness. And tonight's foe is far better than the one we play December 1, Loyola of Maryland. I think it's better for Diallo to not play tonight. Just my opinion, though.

I was just thinking the same thing. I don't think trial by fire would be good for his development, I could be way wrong.

Let's hope he starts out as well as Carlton Bragg has started.

If he does start as well as Bragg did, maybe he can actually start a few games.

I feel you from that standpoint but I would at least like to see the kid dress after all the hell he has been through.

OK the problem is solved. But to save face they added another game to their so called violations. But honestly playing tonight would not be a disadvantage to him. Most of us would like him to play tonight. NCAA received much criticism to this suspension and probably fair as they obviously bundled it. They only took action after KU and the press made their task performance foolish.

It will be a roar and I would bet a hand clapping, stomping until he comes out of the locker room.

He wouldn't have plaedy meaningful minutes tonight anyway so it's not that big a deal. Just the fact that he's finally been cleared should give KU a really nice boost tonight.

Who cares, Tuesday is fine. Lets take the win and move on.

Diallo makes us better at every position. Huge!

"Based on the amateurism review, the NCAA concluded that Diallo received a limited amount of extra benefits. Therefore, Diallo is not eligible to play for five contests, including the four games Kansas has already played, and its Maui Invitational title game tonight against Vanderbilt."

I want him to play tonight but Tuesday it is! Game on boys!

None of their "reasons" should have taken this long. And the "limited extra benefits" and not letting him play for one more game smacks of trying to minimize criticism by "showing" there was something there after all. At this point, the whole world understands the problems with the NCAA so I'll just let their comments slide, not that I have any influence anyhow.

Usually if extra benefits are gained the player has to repay or contribute to charity. I'm just wondering if they used that to justify the suspension. But no need to cry over spilled milk. Plenty of time to learn the system. Cheick ole buddy the ball is in your hands now.

Somewhere I saw he has to repay $165. Something to do with his legal guardian acting as guardian after the guardianship was approved but before it became legal. Kind of like after a divorce is approved but there is a waiting period before it is final. I guess if you mess around with someone during this period you are considered as having an extramarital affair because your divorce decree is not legally final yet.

some folks at the ncaa need to lose their jobs!

This only makes me angrier with the NCAA 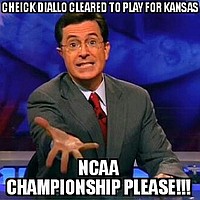 I find the amateurism piece very suspect. What findings ? Will this ever be actually disclosed? And amazing the NCAA - after this many months is able to determine this is a violation and suspension is to the day of the game.

Whatever!!! Still want to know the findings and if they are insignificant I hope civil action is taken.....

I could hear it in the NCAA office yesterday. "Hey Bob" (NCAA clearance guy) " I need to you to close up that Diallo case - we are getting too much heat for taking too long and not finding anything that sticks - so you need to figure out some angle and get it out there. Oh, and you don't go on Thanksgiving break until it is done....mmmmmkay!!!" ( Done in my best Office Space manager voice).

It is BS and I hope the lawyers don't let it go..... It is necessary to find out who is behind the delay, why and what grounds and rules did they follow internally. An auditing process needs to be devised and reviewed by a 3rd party. .

Undoubtedly his sponsor, though the timing and all is still seem suspect.

I doubt the NCAA even knows the meaning of "full disclosure". I also doubt that the general public will ever know what really went on with all of this.

Mickelson can kiss his P.T. goodbye.

Not likely, at least initially. Bill Self loves Jamari.

Mickelson has gotten PT this year?

Congratulations to Self, Zenger and the BBall staff for going the extra miles looking out for the best for our student-athletes.

By the start of conference Diallo could still be ready to go. For the first time since the '08 championship we will be able to see a Kansas team experienced and strong in every position.

Exactly but somebody needs to clarify what happened here. The amateur issue is no reason and if so what is magical about 12/1. I would still go after NCAA because this seems like some sham and only when zenger and media lean did something get down.

It's essentially the same thing that happened to Jackson in '06 or '07.

I'm glad he finally got cleared to play, he will need some good practice and experience before conference play. He will be a huge part of the team! Glad we'll have a full team when when conference play begins, and against Kentucky!

I'm thrilled he is cleared to play! But, I would like to see the evidence on why a 5 game suspension was necessary. I think Diallo's guardian's attorney was correct--this was a de facto suspension because they didn't have the evidence. When they started getting public pressure, they cooked up a BS excuse to save face. Still pissed off, but happy at the same time.

not much they can actually do to save face, the fine and suspension even go further to make them look petty.

Yes but we had to provide the additional information for them to make decisio? Isn't that their job not ours to go to the school and examine the records?

" the NCAA concluded that Diallo received a limited amount of extra benefits ". This is nothing more then a CYA accusation against Diallo to give the NCAA and excuse for the delay. It's past time to close this over reaching partnership down and start anew.

I don't see any way for that statement regarding "limited amount of extra benefits" to be factual. All this time the NCAA inquest seem to have been the number of core classes going back to school in Mali. I think the NCAA was looking for a way out as they realized they were holding a losing hand.

Sub NCAA representatives in place of the officials on that one funny football commercial where they are pretending to discuss a call when in fact they are stalling and have their mikes on, realize it, and then make a call. Oh the ironly of it all. That would be perfect to explain the bumbled mess they drug Cheick through. Free at last Lord! Free at last! Go get some Cheick; it's your time now!

Oliver Luck (Andrew's Dad) is the NCAA executive vice president of regulatory affairs who issued the statement. He's an alum of both West Virginia and Texas. Nothing fishy there...

And when he was AD at W. Virginia he put a clause in Huggins contract that anytime he beat KU he would receive a $25000 bonus ..... Sounds very fishy to me , Luck has something against KU......

Beating KU in this conference is a jackpot, but still odd to see it in a contract.

Im not a conspiracy theorist. But I'll admit somewhat reluctantly that I have wondered about this.

Praise the Lord and pass the ammunition!

The NCAA has been shady for quite some time. Just another reason our schools need to get together, fire the NCAA and incorporate something else.

As much as I'd like that to happen, I don't think it will. If this had happened at another school I don't think KU would be calling for the banishment of the NCAA. If member schools ever reach the point where they collectively say enough, it will probably be over a program going unpunished after obvious and/or blatant violations that create an unfair advantage.

Not only in Diallo cleared, but...

If CD is a top 10 player and is "the fastest" Jayhawk on the team, then he will make an jmmediate impact, and it will be a blast to watch.

Way to encapsulate, Laura. Don't imagine we are related, but I like your style.