The Jayhawks shot just 32 percent from the field and received just 11 points from the bench in a 67-52 loss to Arizona on Monday at McKale Center. 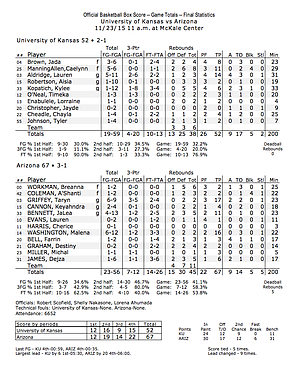 The game was played in front of 6,652 fans — most in Arizona program history — on hand for “School Day.”

“I felt like the environment really bothered us early,” KU coach Brandon Schneider said. “We knew it was going to be loud. We knew they would have 6,000 plus with the promotion going on today. We practiced with music and crowd noise the last couple days. I felt like we had some guys who tried to shoot their way — and that’s just not aggressive. We have to dive on the floor for loose balls. We have to box out, get in a stance and play hard defensively. That’s how you get into ball games. Hopefully our young players will learn from this.”

Guard Taryn Griffey and guard Malena Washington combined for 33 of Arizona’s 67 points on 12-of-21 shooting. Griffey’s 17 points were a game-high, including three three-pointers. Washington had 16 points, ten more than any other bench player.

“We had a really tough night offensively, but credit Arizona for being a big part of that,” Schneider said. “We didn’t shoot it very well — 2-of-19 from our starting 2 and 3 players (Aisia Robertson and Kylee Kopatich). We just have to do a better job of establishing the paint. We tried to play it to Manning-Allen a lot more. I felt she was giving us some good production. We had some perimeter players that didn’t look to her, but we have to understand that when the perimeter shots aren’t going down, we have to give some other guys the opportunity to touch the ball.”

Kansas will travel to Dallas for the SMU Thanksgiving Classic on Friday and Saturday. The Jayhawks will face Northern Illinois at 7:30 p.m. Friday in the first of two tournament games.