Lahaina, Hawaii — Picking up right where they left off in Monday's 123-point explosion against Div. II Chaminade, the Jayhawks raced out to a 59-point first half and slaughtered UCLA in the Maui Invitational semis, 92-73, at Lahaina Civic Center on Tuesday night.

While backup guard Svi Mykhailiuk only made two of his nine three-point tries, he scored 13 points off the bench, to go with four rebounds. 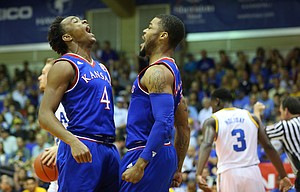 Quick attacks helped Kansas (3-1) all night against UCLA (3-2), as the Jayhawks picked up 15 fast-break points.

• The game turned when: KU ripped off an 18-2 run that turned an 8-7 lead into a 26-9 advantage and set the scene for KU to race out to a 59-33 halftime lead. Ellis scored four points, Jamari Traylor scored four more and the Jayhawks hit three three-pointers during the run. 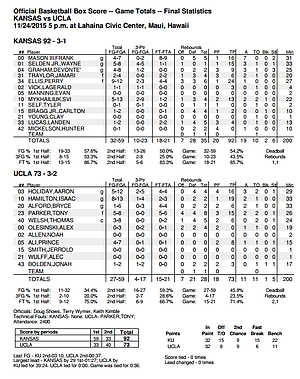 • Offensive highlight: They were subtle, but so sweet and perfectly illustrated the way KU played the first half against the Bruins. On two different occasions, Mason and Devonté Graham fired perfectly thrown outlet passes that jump-started transition and led to easy layups. It wasn't just the passes that were sweet. It also was the way KU finished and how fast it helped the Jayhawks get up the floor. Mason also added a couple of unbelievably sweet first-half passes that set up easy three-pointers for teammates and helped KU run away from the Bruins.

• Defensive highlight: Let's go with one of the game's very first possessions. After opening the contest with a three-pointer from Graham, Mason stepped up and picked the pocket of UCLA guard Aaron Holiday. Mason raced up the floor after the theft and finished a tough, and-one lay-up that drew a foul on Holiday. No one could've known at the time that Kansas would unleash a nasty first half full of plays just like that, but the 6-0 start certainly was a good indicator.

• Key stat: Three-pointers and overall, general shooting. After drilling 15 of 29 three-pointers in the opener, KU hit eight of 15 from downtown in the first half against UCLA to help Kansas roll to a first-half shooting percentage of 57.6.

• Up next: The Jayhawks advance to Wednesday's Maui Invitational title game against 19th-ranked Vanderbilt, which whipped Danny Manning-led Wake Forest in Tuesday's other semifinal. KU and Vandy, led by former Kansas assistant Kevin Stallings, will tip off at 9 p.m. central. 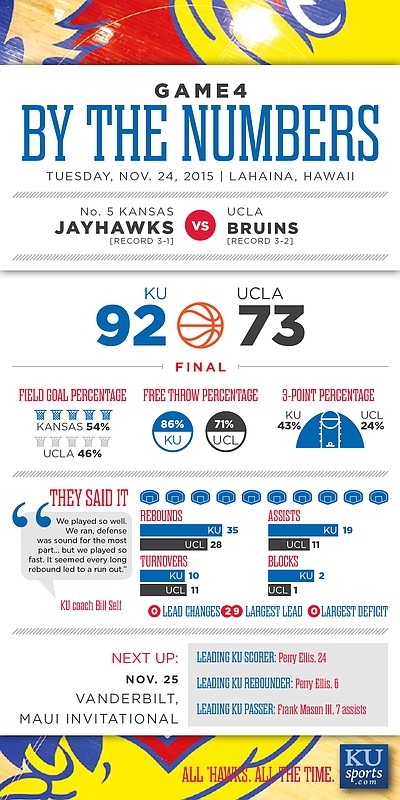 Good gosh a week ago tonight the sky was falling, Bill Self was playing all the wrong guys and this looked like a pretty dismal year. 215 points in 2 games. HOW different things look tonight.

I agree that the naysayers were out in force after the MSU game, but let's not get too excited about a couple of great-shooting games against mediocre defenses.

The key is how KU plays against good or great teams when the shots aren't falling; that's killed us countless times in the past, especially in the postseason.