Lahaina, Hawaii — It’s a big deal — front-page news of USA Today, the lead story on “SportsCenter” — on the rare occasion NCAA Div. II Chaminade knocks off a Div. I squad at the Maui Invitational.

“That time period was one of the most exciting periods in my life, beating them. They were in the top 20. Nobody gave us much of a chance,” Bovaird, now in his fifth year at the Honolulu school, said. 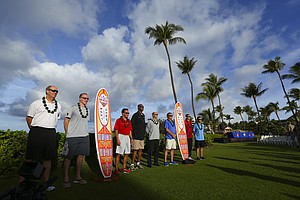 Kansas head coach Bill Self and the rest of the coaches from the 2015 Maui Invitational field meet with media members just off of Kaanapali Beach in Lahaina, Hawaii.

“It kind of changes your life a little bit,” Bovaird added, “because a lot of people remember that for a long time. I get asked about it all the time. It’s a special moment in my life.”

And a low moment for former Texas coach Rick Barnes, who also lost to the Swords when he was at Providence. Chaminade also has knocked off the likes of Oklahoma, 68-64, in 2010 and defeated Villanova, Louisville and of course Ralph Sampson and Virginia throughout history.

“We’re going to need a lot of luck and things to go our way to even have a chance to play with them,” Bovaird said of KU. “They have 12, 13 guys who would all start for me. At the end of the year, I predict them to be in the Final Four for sure.”

Actually, on paper, there is one way Chaminade could conceivably knock off the Jayhawks, who finished last week ranked No. 4 in the AP poll: by hitting threes.

“Every player on our team has the ability to shoot threes. That’s how I recruit. We can’t get the 6-(foot-)10 guys they (Jayhawks) have. We play a unique style,” said Bovaird, whose tallest player is 6-9 Matt Southard, who hails from Norman, Oklahoma. He has played just four minutes all season.

KU coach Bill Self is not looking ahead to the likelihood of playing UNLV or UCLA in a second-round winners-bracket game at 9 p.m. Tuesday.

“They definitely throw it up there fast and play fast,” said Self, noting Chaminade averages 96.0 ppg to its foes’ 102.0.

KU junior forward Wayne Selden Jr. said the Jayhawks will respect a Chaminade program that is 7-84 all-time at the Maui event. KU is 11-6 in five previous trips to the Invitational, winning it in 1996.

Vick to get playing time?: Freshman Lagerald Vick figures to net some perimeter minutes, especially with Brannen Greene out six games due to suspension.

“Whether he’s ready or not, he’s going to be out there,” Self said. “He has to play in goggles, which has him totally messed up right now because of a scratch to the eye, the reason he didn’t play against Michigan State. I think he can help us. He’s excited to have that opportunity. We need that from a depth situation, but we will play Perry (Ellis, forward) some at 3.”

Self on playing three games in three days: “Obviously conditioning will be a huge factor. Depth will be a factor. It’s a grind. It should be a grind. Things like cramping. I think it’ll be important how guys take care of themselves while over here. Everyone who has been over here has had players experience this (cramps).”

This, that: Self said he’d start the same group of Graham, Selden, Ellis, Frank Mason III and Jamari Traylor. ... Self hit one of three free throws in the annual tourney free-throw contest. UCLA’s Steve Alford didn’t miss. ... The Jayhawks attended a luau Saturday night. “It was one of the best luaus I’ve ever been to,” Self quipped. “It was fine. I think it’s good when you get all the teams there. They (Jayhawks) can see the guys from other teams. I think it gets their competitive juices flowing a little bit.”

The Chaminade Mascot is actually a beautiful silver flower that grows upright with multiple petals high on the slopes of the volcano. Maui is the only place in the world where they can be found. If I recall, you get in big trouble if you try to take one.

Please, all of you Jayhawk fans, put this tourney on your bucket list. It is incredibly fun. Kannapali Beach is exquisite and the town of Lahaina is a hoot!! I've been to Hawaii seven times between business trips and honeymoons, and Maui is, by far, the island with the most action.

If it is seven marriages I'm extra impressed. Lol.

Chaminade's 6'9" dude and Hunter decide to switch places and no one notices until the first Baylor game when Bill decides Jamari and Landon need a break from from Rico Gathers.

As a fan it is okay for me to look past the Silver Swords and anticipate a match up with UCLA, Vandy or Indiana.

If we get upset by Chaminade we can say our guard play needs to get better after Wayne, DeVonte and Frank the III go 5 for 50 and Bill says we need to finish better at the rim.

All this stupid s*** is my way of saying I don't know what to expect at any level except that Perry should be able to score 30 with a double/double this evening. Also since Bill thinks Svi has more to give then it will be up to young Svi to finally grab it.

MSU contested every perimiter shot because they didn't feel the need to sag off. Perry was able to score inside but we didn't run the offense through him enough. Let him be the man, free the Svi and play Hunter please. Maybe Hunter sucks but we haven't seen enough of him to really tell. Why? Landon and Jamari are so limited offensively. We have seen enough of that. A sweep through this tourney would get our mojo back.

Back in my day "crossing swords" meant something very different than basketball...

Gary may have a side job writing for a different publication and accidentally blended two important stories for his diverse readership.