Lahaina, Hawaii — There isn't a person on the planet who thought Maui Invitational host school Chaminade was going to beat fifth-ranked Kansas University Monday night in the tournament opener for both teams.

But it might not have been that difficult to find a few people who thought the Silverswords could stay within the 29-point spread set by Las Vegas oddsmakers.

And who could blame them? Kansas came into the game on the heels of last week's Champions Classic collapse against Michigan State that featured 20 missed layups and more than a little frustration.

After a long trip and all of the distractions that paradise has to offer, a sluggish and sloppy victory might not have surprised anybody, especially when you consider that Chaminade has been known to get hot from three-point range and ride the triple to some serious point totals. 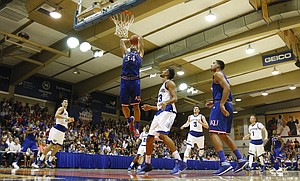 On Monday, it was Kansas that put up the serious point total, storming to a 123-72 victory.

More impressive than KU's offensive output was the fact that Monday's win proved to be exactly the kind of response you would expect from a veteran team with championship aspirations.

"I think so,” said junior Landen Lucas when asked if the run-away victory was just what the doctor ordered. “Defensively, we have a lot to work on, but it was nice to get some guys (their) confidence back. I think a couple guys on our team could definitely use that game." 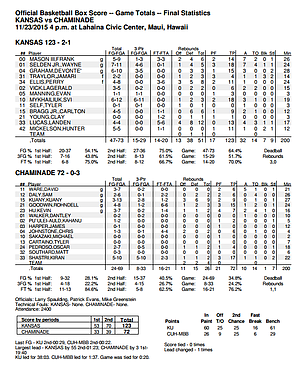 The Jayhawks (2-1) probably could have knocked off Chaminade in comfortable fashion by playing only their second five. But that did not stop the starters from playing with the kind of hunger and intensity that said more than “we're here to score.”

Seven Jayhawks reached double-figures. Point guards Devonté Graham and Frank Mason III attacked over all 4,700 square feet of the floor. And sophomore Sviatoslav Mykhailiuk, who poured in a career-high 18 points on 6-of-11 three-point shooting, might have made his most notable contribution by diving, face-first, on the floor for a loose ball to start a fast break with his team leading by 50 late in the game.

“I guess we played pretty hard,” said KU coach Bill Self. “It didn't seem like we guarded very well for a good part of the game, but that's one thing with our guys normally; there's always exceptions, but we do usually play pretty hard and we compete pretty hard and play with good energy. The reason we lost to Michigan State didn't have anything to do with those three things. We just didn't close.”

Sure, Monday's easy victory will be remembered by most for Kansas exploding for a 15-of-29 clip from three-point land. The best way to cure layup woes is by jacking up threes, right?

But this one should be remembered more as the perfect response by the most mature KU team we've seen since the 2011-12 team that reached the national title game.

This group might not be led by personalities as strong as Tyshawn Taylor and Thomas Robinson, but teams show toughness in many different ways. And the mental toughness to bounce back from an admittedly gut-wrenching loss in a showcase event just a week earlier with an old-fashioned butt-whipping shows more than a little about this team.

“If you call it an answer, it was good to get back on the winning track,” Self said. “We knew coming in that we had a size advantage and depth advantage and things like that, but, moving forward now, everything the next two nights is going to be very difficult.” 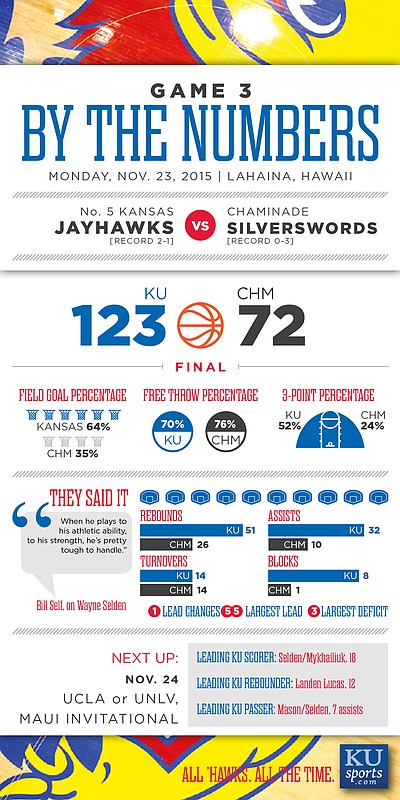 Great win, D2 or D1 - we know our team is capable of scoring if they keep their heads focused on the winning and not the scoring itself. 32-assist is more impressive than the score. It's a good sign that the ball is being shared. Let's hope the guys get their confidence and win some more!!

Can this team string together consecutive games of good shooting? Last year it seemed if KU shot well one game it was destined to shoot poorly the next.

Granted, anything is going to seem poor after shooting 64% and scoring 123 points..

How come there is no word from NCAA on Diallo? Any updates....

Allowing them to score 72 points is not a very good look for us...