In the flow: KU women pick up attack after halftime

From left, Kansas' Timeka O'Neal (12), Aisia Robertson (15), Caelynn Manning-Allen (25) and Jada Brown cheer from the bench during their game against Memphis Thursday, Nov. 19, 2015, at Allen Fieldhouse.

After a 12-turnover first half had Kansas University women’s basketball coach Brandon Schneider discouraged with his players’ offensive efforts, the Jayhawks found an effective remedy in the second half Thursday night at Allen Fieldhouse.

Although Memphis trailed by a single point entering the third quarter, KU never relinquished its lead, as ball movement and some good, old-fashioned sharing set up a 72-63 Jayhawks victory.

All nine Jayhawks who played contributed at least two field goals, and the offense really began to flow in the third quarter, when KU finally overcame Memphis’ attacking defense by reversing the ball and making a point to get the ball into the paint.

“Sometimes pressure will cause you to panic a little bit,” Schneider said of KU’s initial response, in the first half, “and if you’re not turning it over, you’re taking a quick shot.” 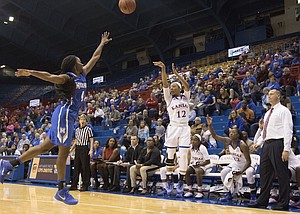 Kansas coach Brandon Schneider watches as junior guard Timeka O'Neal (12) drills a three point shot over Memphis senior guard Ariel Hearn (4) during their game Thursday evening at Allen Fieldhouse. The Jayhawks outlasted the Tigers, 72-63, to improve to 2-0 on the season.

Never did KU (2-0) look more comfortable than on one third-quarter possession, when all five players touched the ball in the half court, and the set finished with freshman guard Kylee Kopatich (14 points) dishing a bounce-pass to sophomore guard Chayla Cheadle (six points) for a layup.

Shortly after that display, freshman backup point guard Jayde Christopher (four points) rewarded fellow first-year sub Tyler Johnson for her work on the offensive glass by whipping a pass through the Tigers’ defense for a lay-in.

The next time down the floor, Johnson (six points, 10 rebounds) caught the ball at the free-throw line and spotted Kopatich cutting back door for a layup that put KU ahead by six. 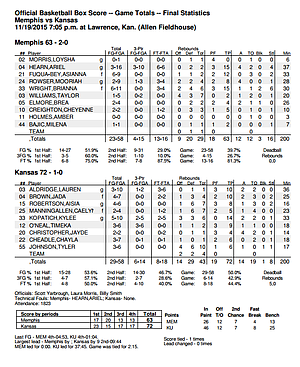 Explained Christopher, who had a team-leading four assists off the bench: “Coach always preaches to make sure you get in the lane. If you don’t have it, make sure that you kick it out. So that’s pretty much what I was doing.”

Really, all the Jayhawks took that approach in the second half, and KU finished the win with a 46-26 advantage in points in the paint, and seven second-half turnovers.

“We yell drive it,” a smiling Schneider added. “A lot.”

Memphis (2-1) trailed by five entering the fourth quarter but quickly cut it to one. That’s when KU sophomore guard Lauren Aldridge (10 points) scored on a layup and junior backup guard Timeka O’Neal knocked down her first of two fourth-quarter threes to give the home team a little breathing room.

When Memphis got back within two points, junior forward Jada Brown (10 points, four rebounds) finished a layup off an O’Neal pass on one possession, then returned the favor by finding O’Neal for a three that stretched the lead to seven.

O’Neal has impressed Schneider each of the four times KU has played in November, including two exhibitions.

“I think that says a lot about her willingness to step up and have the courage and the confidence in herself to take those shots,” the coach said of her late-game threes.

The Jayhawks play their first road game of the season Monday at Arizona.

So far, so good. I wish them a successful season. They deserve it.

Way to go, ladies. Look forward to seeing you this coming Monday morning in Tucson. We'll be all decked out about 9 rows back from your bench. Hope to be able to "wave the wheat" and do the "Rock Chalk Chant" at the end.