The Kansas bench makes some noise as the Jayhawks regain the lead during their game against Texas Southern Sunday afternoon at Allen Fieldhouse.

With only six players returning from the 2014-2015 roster, Kansas University first-year women’s basketball coach Brandon Schneider is far from being the only fresh new face to the program.

Schneider led his young Kansas squad through some adversity in his KU coaching debut, when the Jayhawks outlasted Texas Southern, 72-65, in their season opener Sunday at Allen Fieldhouse. 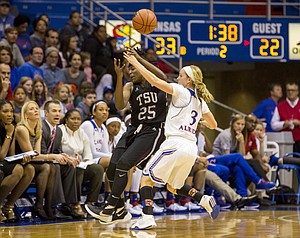 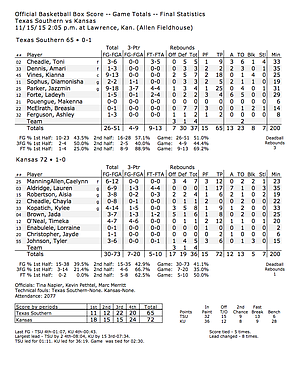 “We told the team right before the fourth quarter started how perfect the game was for us to have to go try to win it in the fourth quarter,” Schneider said. “To be in that position the first game, to be tested like that, find out how guys could respond, I thought, was a real positive.”

After building a 39-24 lead 21⁄2 minutes into the third quarter, the Jayhawks saw their advantage dwindle to 48-45 going into the final 10 minutes. The Tigers went on to grab their first lead since 3-2 when Toni Cheadle, cousin of KU sophomore Chayla Cheadle, converted a traditional three-point play to give TSU a 50-48 edge with 8:04 to play.

The Jayhawks and Tigers battled for the next four minutes before Kansas closed the contest with a 13-5 run.

“They were very heady. They were smart,” TSU coach Johnetta Hayes-Perry said of the Jayhawks. “Coach (Schneider) has done a great job of coaching them through some certain things with the ball at his end of the floor.”

KU sophomore point guard Lauren Aldridge paced the Jayhawks with a career-high 17 points and seven assists. Aldridge got the Jayhawks going early with back-to-back dimes to Caelynn Manning-Allen, who also had a career high with 12 points. However, the KU floor general had a tough task at hand on the defensive end with guarding Jazzmin Parker. In the TSU guard’s first game back from a torn ACL that sidelined her last season, Parker scored a game-high 25 points. Parker also netted 34 points against the Jayhawks two years ago in Allen.

“She gets excited about coming to Kansas,” Hayes-Perry said with a laugh.

While Parker helped the Tigers roar back with 11 points in the third quarter, Aldridge shut down TSU’s top-scoring threat in crunch time.

Aldridge had plenty of help down the stretch to help the Jayhawks close it out. Junior Jada Brown, freshman Kylee Kopatich and fourth-year junior Timeka O’Neal each knocked down a three-pointer as the Jayhawks were a perfect 3-for-3 from long range in the fourth quarter. Freshman Tyler Johnson also had four of her six points in the fourth and was a big presence down low for KU with five rebounds and three blocks in 15 minutes off the bench.

“I’m so happy to be able to play here at Kansas. I wasn’t as nervous as I thought I would because I had a team I could trust,” the Leavenworth product said. “I knew that if we went out and played hard that we would get the win.”

Johnson is joined by Kopatich, an Olathe South grad, as a freshman who is expected to make key contributions throughout the season. Kopatich struggled from the floor early but found her shot late on her way to pouring in 14 points and pulling down eight boards in her collegiate debut.

“We’re so young that anyone we have out on the court, we’re going to need them to impact the game in a positive way. Obviously, Tyler and Kylee have both done that,” Schneider said. “I’m really proud of how comfortable they are. The moment is not too big for them.”

The Jayhawks will host Memphis at 7 p.m. Thursday at Allen.