Ex-Kansas golfer Thompson heats it up

Thompson’s four-round total of 24-under par made him the low medalist by nine strokes and advanced him to the third and final stage of qualifying next month in Florida.

The top 20 finishers plus ties, in this case 24 players, qualified from three different second-stage sites.

Thompson’s third-round 62, one stroke off the course record set by PGA Tour player Ryan Palmer, was the highlight of the Tuesday-through-Friday event. Thompson made 10 birdies and eight pars Thursday. 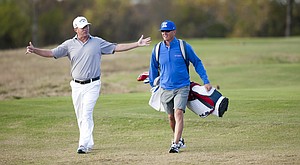 “It was just one of those days where I made everything,” Thompson said Friday of the 62 he shot on Thursday. “I played fine, but the putter was the reason I shot 62. I just kept hitting it on the green to give myself chances and they just kept going in.”

Thompson played without a caddie in the first two rounds and had KU associate athletic director Sean Lester on his bag for the final two rounds.

Thompson said he plans to be in Lawrence through Thanksgiving and will head to Florida at least a few days in advance of the Dec. 10-13 final stage.