Eighteenth-year Kansas University volleyball coach Ray Bechard’s program has come so far so swiftly in the past handful of years that the Jayhawks took mighty Texas to five sets Wednesday night in electric Horejsi and instead of strutting at that achievement they kicked themselves for not winning it in four sets. And rightly so.

Better serving late in the third set could have made a four-set victory happen, which would have put Kansas alone atop the Big 12 standings. Instead, KU trails Texas by a game with four matches left after losing in five sets.

Kansas will earn its fourth consecutive NCAA tournament invitation, a program first, and is ranked 10th in the nation and sixth in the most recent RPI rankings.

An NCAA rule change also plays to KU’s favor in terms of having a stronger homecourt advantage come tournament time. Thanks to the lowering of the minimum capacity required for tournament matches, Horejsi now qualifies and the site won’t have to be Allen Fieldhouse, where bigger crowds could be accommodated, but the less intimate setting would dilute the homecourt advantage. 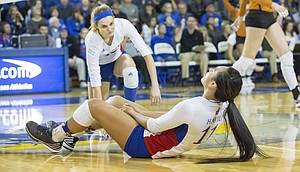 “I don’t think there’s any reason why you want to play anywhere else after the environment you saw tonight,” Bechard said. “I’d be all for going to the fieldhouse, because we could get 5,000, 6,000 people and grow the sport, but I think the big thing is to give our team the best chance to win.”

No-brainer. Play them at Horejsi and find a way to hog the tickets for Kansas fans to the greatest extent possible.

Even before this recent elevation of the program, one aided by associate head coach Laura “Bird” Kuhn and assistant coach Todd Chamberlain, both 2010 additions, volleyball crowds had lent loud support from loyal backers.

As the program’s recruiting has improved, the decibel level in the building has kept pace.

As with so many athletic programs at Kansas, the Texas recruiting pipeline has served the Jayhawks well. A talented trio of sophomore Texans — superstar Kelsie Payne (Austin), Madison Rigdon (Plugerville) and Ainise Havili (Fort Worth) — all had memorable plays during Wednesday’s five-set thriller. Junior Tayler Soucie from Osawatomie and senior Tiana Dockery from Richmond, Texas, had exceptional nights.

“I think our kids believe that this is a legit volleyball program,” Bechard said. “...There’s an expectation. There’s a culture. And I think we can continue to maintain that and grow.”