Kansas wide receiver Darious Crawley (12) eyes the ball as Texas defensive back Holton Hill (5) swoops in to bat it away during the third quarter on Saturday, Nov. 7, 2015 at Darrell K. Royal Stadium in Austin, Texas.

Senior wide receiver Tre’ Parmalee and freshman receiver Steven Sims Jr. missed the trip to Austin, Texas, because of a violation of team rules and did not play against the Longhorns.

KU coach David Beaty confirmed the suspensions with a statement released an hour before kickoff.

“As we build our program, we cannot skip any steps in laying the foundation,” the statement read. “We have set a standard that we expect every player to meet and if you do not meet that standard, there will be consequences. Tre’ and Steven are good young men and we expect them to meet the standard next week and be back on the field with our team.” 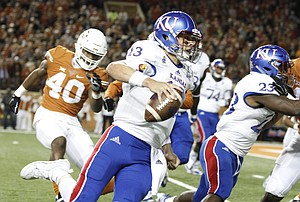 Asked about the absence of two of the team’s top options in the passing game, Beaty said he was eager for Parmalee and Sims to be back on the sideline.

“We absolutely missed those guys,” Beaty said following a night when KU finished 19-of-41 passing with three interceptions. “But we’re looking forward to getting them back, and I think they learned.”

What did these guys do - skip class?

That would be my guess.

I like Beaty's quote, "we can't skip any steps". Players need to know that no one gets special treatment. It will pay off in the long run.

It really doesn't matter, if you ever hope to have a well-oiled and functioning team, you need rules and instructions. There must be order to function. Those who do not toe the line need to be disciplined or dismissed. One "bad apple" can create more.